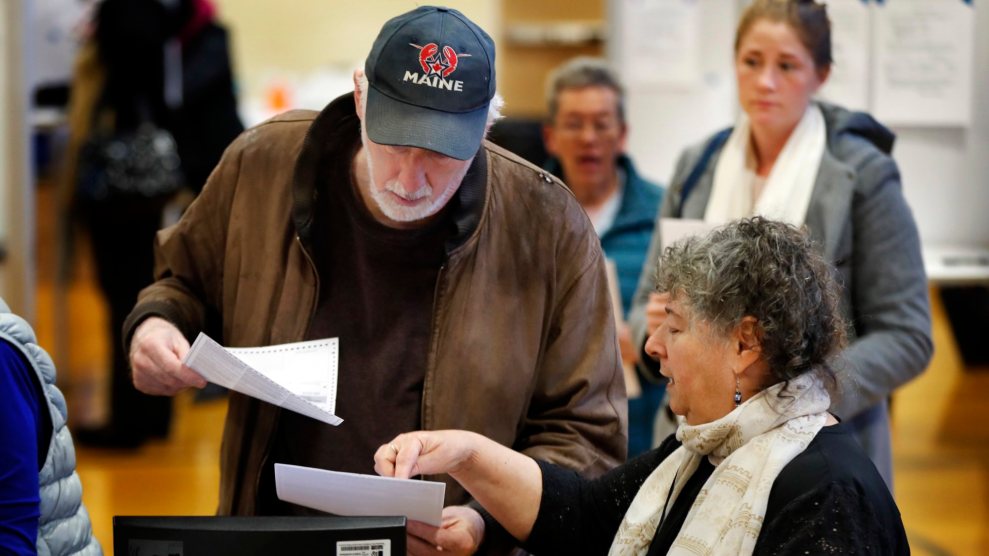 When all the votes are counted from Tuesday’s elections, a little-known ballot initiative in Maine could prove to be one of the most consequential contests—impacting the health care received by tens of thousands of people and showing how voters feel about Obamacare after Republicans spent most of 2017 trying to undo the law.

Question 2 on Maine’s ballot is a simple proposition: Should Maine finally participate in the part of the Affordable Care Act that expands Medicaid to cover anyone who makes up to 138 percent of the federal poverty level (that’s $16,642 for an individual or $33,948 for a family of four in 2017). If the initiative passes, about 80,000 more people are expected to gain Medicaid coverage in the state.

Expanding Medicaid to a wider group of the working poor was one of the central elements of Obamacare. Under the law, the federal government initially pays the entire cost of the expansion—though the federal share eventually falls to 90 percent, with the states funding the remaining 10 percent. (That’s a much better deal for states than the traditional Medicaid program.) The way the law was originally written, Medicaid expansion wasn’t much of a choice for states: They would either have to accept the expansion or lose all of their federal Medicaid funding. But then the Supreme Court stepped in, declaring that states could choose to reject the expansion without jeopardizing their preexisting Medicaid funding. States controlled by Democrats quickly adopted the expansion, but many red states refused to sign on. To date, 19 states with Republican leaders in either the state legislature or governor’s office have refused to expand Medicaid.

Politicians in Maine have tried over and over again to expand Medicaid in the past, with the state legislature voting for five bills to do so. But each time, Republican Gov. Paul LePage has issued vetoes. Liberal groups in the state gave up on that route, and earlier this year they collected enough signatures to get the initiative on the ballot for this fall. Not surprisingly, LePage has vocally opposed the ballot measure.

For a rural state like Maine, expanding Medicaid could shore up finances for a number of hospitals that are in danger of closing—more than half the state’s hospitals are currently losing money. Part of the problem is that the ACA cut funding for health providers who provide uncompensated care to uninsured patients—patients who were now supposed to be covered under Medicaid. But when Maine and other states refused to expand Medicaid, health care providers were left without any way to recover those funds.

Studies have shown that Medicaid expansion has both benefited the people who gain coverage and also reduced costs for everyone who buys insurance. A 2016 government study looked at how Medicaid expansion lowered the cost of premiums for people who buy insurance on Obamacare’s individual exchanges, finding (when controlling for various factors) that premiums were 7 percent lower in places with Medicaid expansion. And a study in Health Affairs concluded that people with lower incomes were in better financial shape in the states that took expanded Medicaid. According to the left-leaning Center for Budget and Policy Priorities, “On a per-state basis, the nine states with the largest coverage gains since 2013 expanded Medicaid.”

Medicaid expansion generally polls well across the country, but it’s hard to know how it’ll fare on Tuesday. This is an off, off year election, so turnout is impossible to predict. (The state’s other big race, Question 1 on the ballot, is about granting a casino license in a southwestern county.) Maine is the first state where voters will have a direct say over whether or not to adopt Medicaid expansion, but it might not be the last. Groups in Utah, Alaska, and Idaho are keeping an eye on the results and might launch their own ballot initiatives next year.