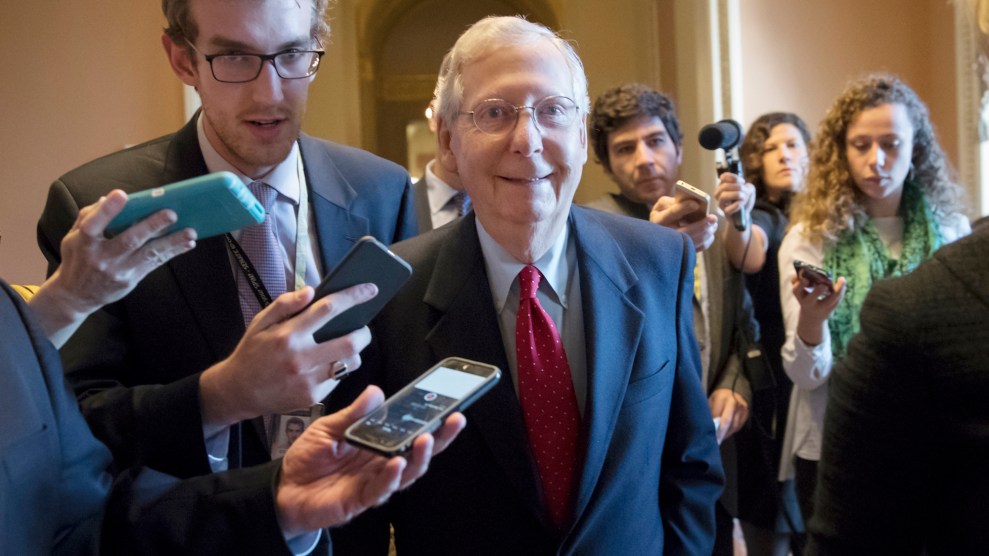 Senate Majority Leader Mitch McConnell tells reporters "we have the votes," as he walks to the Senate chamber on Friday.J. Scott Applewhite/AP

Just before 2 AM Saturday morning, Senate Republicans passed the most sweeping tax legislation in 30 years. The final version of the three-week-old bill was not released until four hours before the vote. There have been no hearings on the bill and none of the bipartisanship seen during the last major tax overhaul in 1986.

The bill, the Tax Cuts and Jobs Act, is projected to add more than $1 trillion in deficit spending over 10 years, but passed a Republican caucus that spent the Obama years obsessed over the national debt. There was just one dissenter in the party, Sen. Bob Corker of Tennessee. The final vote was 51 in favor, 49 against, with all the Democrats and Corker voting no.

There were a smattering of last-minute changes tucked into the nearly 500-page bill, but the core of it is quite simple: a permanent tax cut for corporations combined with much smaller, and temporary, benefits for everyone else. Over the next decade, the $1.4 trillion tax cut would disproportionately reward the wealthiest Americans while piling on the national debt—which in turn will likely be used by Republicans as a justification for cutting Social Security, Medicare, and Medicaid.

The House, which already passed its own tax bill last month, and the Senate are expected to work out the differences between their bills in conference meetings. Then each chamber would vote again, and send the final product to President Donald Trump’s desk for his signature. Trump hopes to sign what he has called his “big, beautiful Christmas present” to the American people by the end of the year.

Before the individual cuts expire in 2026—ending the bill’s most charitable years—the top 1 percent would receive slightly more of the tax cut than the bottom 60 percent of Americans combined. Without the individual tax cut, the top 1 percent would get start getting 61 percent of the benefits. And at that point, the vast majority of middle-class taxpayers would receive essentially nothing, or end up paying higher taxes.

Republicans say they’ll eventually extend those individual cuts. But there is good reason to doubt that. The United States will be facing unprecedented debt levels when it comes time to renew the cuts. The annual deficit would be $1.4 trillion in 2025, up from about $700 billion today. The Senate bill asks Americans to trust that a future Congress, comprised of different members, will continue to ignore deficits.

While the Republicans have waffled in their concern for the national debt, the bill shows that they have steadfastly committed to trickle-down economics. Focusing on the corporate tax cuts, the White House Council of Economic Advisers has said the average family would see their income jump by up to $7,000 per year as businesses pass on their windfall. Tax experts have called this forecasting “absolutely crazy,” “absurd,” and “deeply flawed.” On Thursday, Congress’ nonpartisan Joint Committee on Taxation found that the bill would add $1 trillion in deficit-spending over 10 years even after taking into account economic growth. But Republican leaders continue to maintain that the bill would pay for itself—despite there being almost no economists who agree with that assessment.

This all begs the question of why Republicans are pushing a trillion dollar corporate tax cut at this particular moment. Corporate profits are near record highs, the rich are richer than they’ve been since the Great Depression, and the incomes of average Americans are in a four-decade slump. Tax reform could have eased that hardship by expanding the Earned Income Tax Credit or making working-class families eligible for Republicans’ expanded Child Tax Credit.

Adding to congressional Republicans’ dubious claims about the fantastical benefits of the bill is the president himself. Trump has regularly claimed that he will not personally benefit from the tax plan. That is almost certainly false. The president, and his children, likely stand to gain tens of millions, if not hundreds of millions, of dollars. But, conveniently for Trump, it is impossible to know for sure without seeing his tax returns.

So why are Republicans are in such a rush to pass a bill that just 25 percent of Americans approve of? For one, there seems to be fear that the bill will only get more unpopular if subjected to further scrutiny. And then there are the donors. “My donors are basically saying, ‘Get it done or don’t ever call me again,’” Rep. Chris Collins said earlier this month. Many have already closed their checkbooks, and Republicans are keen to see them reopened.

Along with restructuring the tax code, the final bill is also likely to advance a broader culture war. Both bills at least partially block the parents of undocumented children from claiming the Child Tax Credit for their kids. And the House bill would let churches and nonprofits endorse political candidates for the first time since 1954. Mega-donors like the Koch Brothers would get a taxpayer subsidy for campaign spending if the provision makes it into the final bill. Campaign finance groups warn that it is another Citizens United in the making.

None of these provisions fit neatly with Republicans’ stated goal of making the tax code postcard-simple. Nor have the bills’ inclusion of carveouts for everything from citrus trees in Florida to tuna canneries in Pago Pago, American Samoa. (On Friday afternoon, Sen. Claire McCaskill (D-Mo.) tweeted out a list of about 30 forthcoming amendments that had been passed from Republicans to a lobbyist to Democrats.)

Speaking on the Senate floor earlier in the night, Minority Leader Chuck Schumer (D-N.Y.) said Friday was one of the “darkest, black-letter days in the long history of this Senate.” He held up an amendment, which went on to be defeated just before the bill passed, that was added “under the cover of darkness” by Sen. Pat Toomey (R-Pa.) that exempts a college connected to Education Secretary and billionaire Republican donor Betsy DeVos from a new tax on university endowments. Schumer said the last-minute move was the “metaphor for this bill and how high the stench is rising in this chamber.”

Schumer moved to adjourn the Senate until Monday so that his colleagues had time to review the “monstrosity.” He argued no one could possibly know what they were being asked to vote on. McConnell, well aware that he had the votes to knock down the motion and pass the bill, listened and smirked.