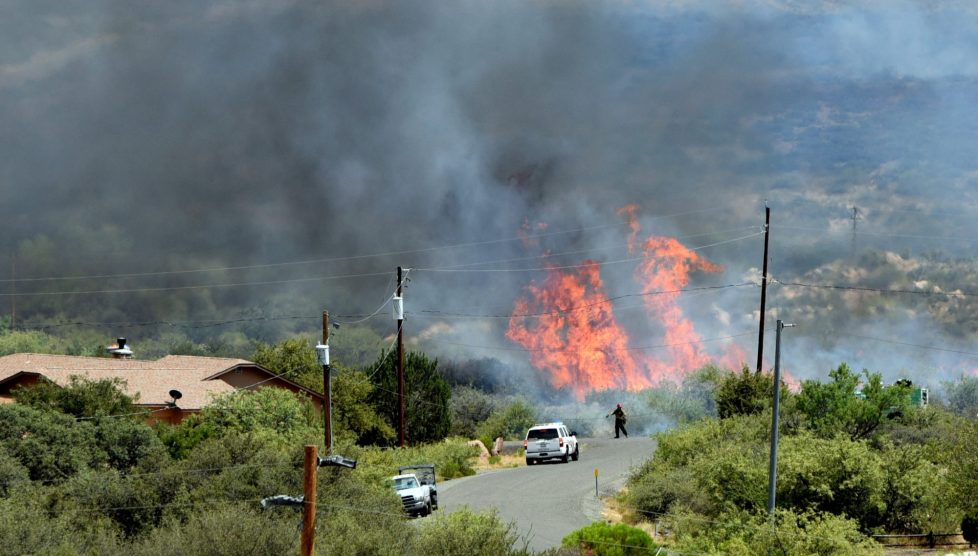 Brush burns near a home on the Bug Creek Fire near Cordes Lakes, Arizona, in 2016.Les Stukenberg/AP

Americans suffered from a spate of deadly wildfires, hurricanes, and floods in 2017. Next year, they’ll likely have one less resource to deal with such catastrophes: The GOP tax bill, expected to pass any day now, would eliminate a tax deduction for uninsured casualty losses from natural disasters. Right now, disaster victims can deduct losses that aren’t insured and that amount to more than 10 percent of their incomes. Under the new tax plan, the deduction could only be claimed for those disasters that the president declares a federal emergency.

In 2015, more than 72,000 people filed a casualty or theft deduction, resulting in $1.6 billion in claims, according to the IRS’ Statistics of Income Division. (The IRS lumps casualty and theft deductions together in its count). The proposed change would go into effect January 1, 2018, meaning disaster victims could file one final deduction this year if they experienced a loss that did not receive Federal Emergency Management Agency (FEMA) support.

The tragic fires that blazed through California in recent months, along with Texas’ and Puerto Rico’s horrendous hurricanes, did receive federal emergency declaration, so their victims would still qualify for the deduction under the new tax bill. But most disasters aren’t large enough to attract attention from the White House.

“So what will happen with tax deductions in the future—will the color of the state matter?”

“Casualty losses occur in isolation; you’re just unlucky and your house burns down in a fire,” Steve Rosenthal, a senior fellow at the Urban-Brookings Tax Policy Center at the Urban Institute, said. He thinks getting rid of the casualty loss deduction for most natural disasters is just one more way the Republicans are hoping to raise some revenue: “Really, you can look at this as denying deductions in the future for individuals to help pay for the large corporate tax cuts.”

The proposed change has some legislators fuming. “After the worst fire season in California history, it’s unbelievable that Republicans are considering eliminating the tax deduction for losses suffered during a natural disaster,” Democratic Sens. Dianne Feinstein and Kamala Harris said in a joint press release last month. “Asking victims of wildfires or earthquakes to suffer in order to pay for tax cuts for the rich is the height of cruelty.”

What’s more, without the casualty loss deduction, declaring a federal emergency could become a political bargaining chip. All emergency and major disaster declarations are made at the discretion of the president, according to FEMA. “So what will happen with tax deductions in the future—will the color of the state matter?” Rosenthal says.