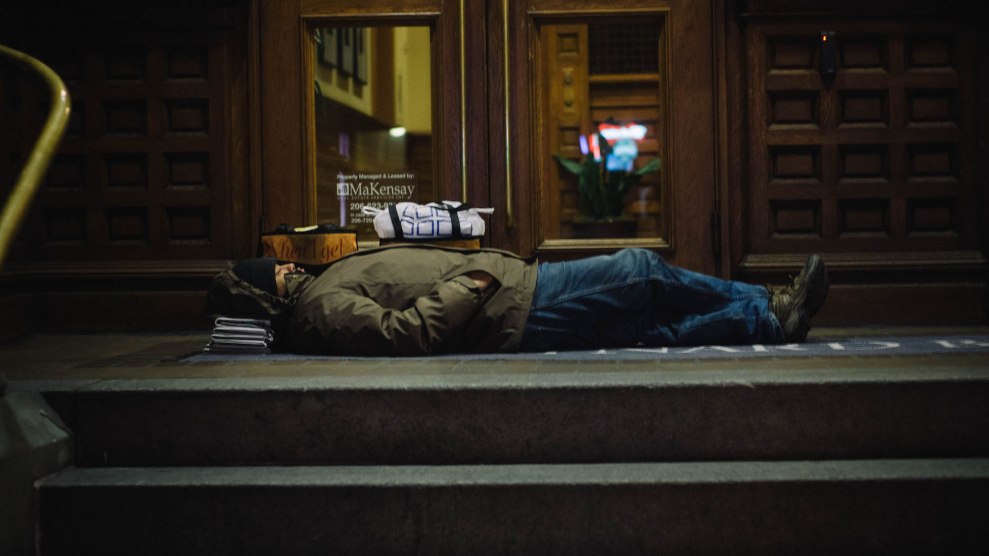 For the first time in seven years, the number of people without a safe, regular place to sleep in America has grown. On any given night in 2017, nearly 554,000 people across the country were homeless, just under a 1 percent rise above 2016 levels. The figure comes courtesy of the US Department of Housing and Urban Development, which publishes an annual report on the landscape of American homelessness. Overall, the number of people without a decent place to lay their heads at night is still down by more than 83,000 since 2010, a 13 percent drop.

Fueling this year’s rise in homelessness is California, which had 134,278 homeless people in 2017, more than any other state and 25 percent of the nation’s total. California saw the largest absolute increase in homelessness of any state between 2016 and 2017.

And as the New York Times reports, living on the streets can often be a death sentence. In fact, California’s Santa Clara County, home to Silicon Valley’s 76,000 millionaires and billionaires—and the county with the largest income gap nationwide—has seen a dramatic surge in the number of homeless deaths in recent years.

More than one-quarter of the total homeless population nationwide lives in California, roughly 114,000. The vast majority are “unsheltered” — a more bureaucratic term to describe the thousands living on the streets, under freeways and tucked into grassy fields and parks in cities all around the state.

It’s certainly a bigger increase than we would have expected,” said Ben Metcalf, the director of the state’s Department of Housing and Community Development. “There’s a tale of different countries here: We’re seeing a real significant increase and much of the rest of the country is not. We’re all doing the same things, but here the rent is too damn high. We’ve seen an incredible increase in the cost of housing.
[…]
There is grim evidence at county morgues, too — because of a significant hepatitis A outbreak and because the homeless population is aging, several cities have seen a dramatic rise in the number of people who die homeless. In Santa Clara County, the number of homeless deaths have more than doubled since 2011, with 132 people dying on the street last year.