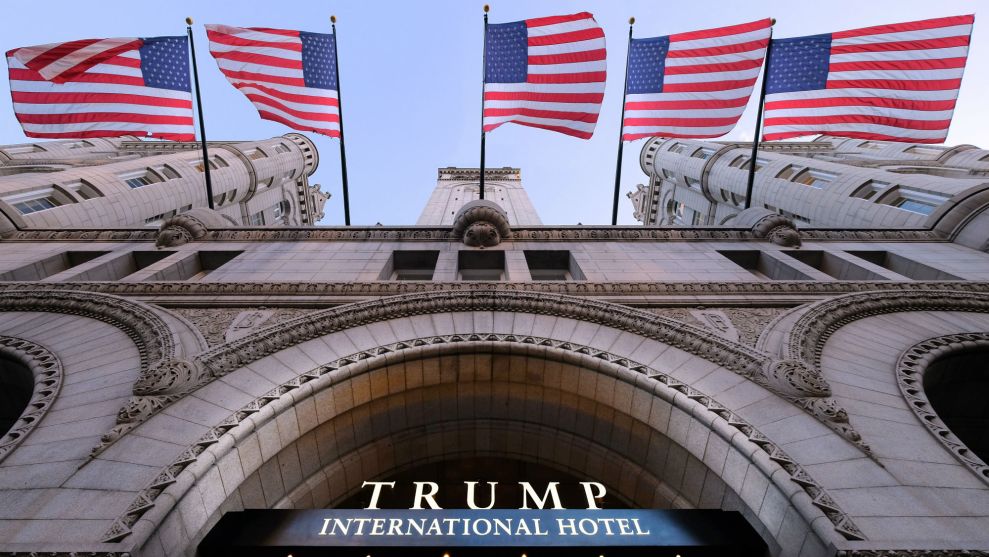 Late on Thursday, a federal judge in New York threw out a lawsuit claiming that the money President Trump receives from his various businesses violates the Constitution’s limits on emoluments, or payments from foreign governments.

Judge George Daniel, in a 29-page opinion, wrote that the plaintiffs in the case—Citizens for Responsibility and Ethics in Washington (CREW), Restaurant Opportunities Center United, event planner Jill Phaneuf, and hotelier and restaurant owner Eric Goode—had failed to show they had suffered from Trump’s business practices, and therefore lacked standing to bring the case. While Daniels’ ruling leaves the question of whether Trump has in fact violated the Constitution’s emoluments clause to another court, the judge suggested that the decision will ultimately be up to Congress.

Richard Painter, the vice-chair of CREW and a former ethics czar to President George W. Bush, told Mother Jones that CREW was looking for a way to continue the case. “We disagree with the opinion and we’re exploring the options for appeal,” Painter says. “I think that’s really where we basically are right now.”

In its complaint, CREW argued that the time it had spent researching and working to limit Trump’s many conflicts of interest as president—to the determent of the organization’s other other good-government projects—amounted to an injury that would give the group standing to sue. Judge Daniels didn’t buy it.

“CREW’s entire reason for being is to investigate and combat corruption and reduce the influence of money in politics through, among other things, education, advocacy, and litigation,” Daniels wrote. “CREW is thus not wasting resources by educating the public and issuing statements concerning the effects of Defendant’s alleged constitutional violations or even by filing suit; this is exactly how an organization like CREW spends its resources in the ordinary course.”

Nor was Daniels swayed by the supposed injuries suffered by the hospitality industry owners and  workers. “Nothing in the text or the history of the Emoluments Clauses,” he wrote, “suggests that the Framers intended these provisions to protect anyone from competition.”

There are at least three other lawsuits pending in federal court zeroing in on the issue of President Trump’s business holdings (from which he has yet to divest in any meaningful way) and the conflicts they pose, either on constitutional or business-competition grounds.