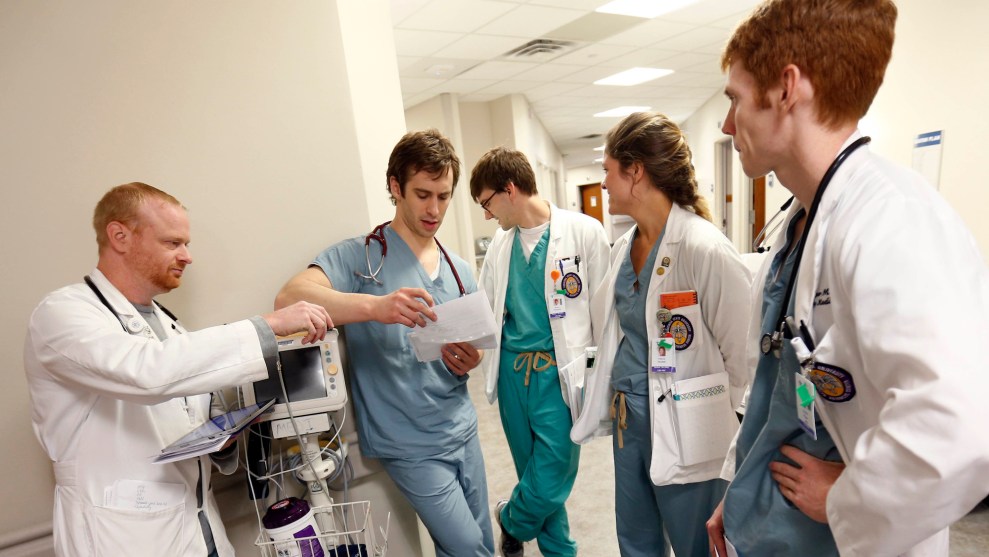 The Trump administration announced on Thursday that it will support work requirements for Medicaid beneficiaries for the first time in the program’s history. Its justification: cutting insurance for low-income Americans who don’t work will improve their health.

Today’s decision by the Centers for Medicare & Medicaid Services (CMS) allows states to impose work or “other community engagement” requirements on Medicaid beneficiaries who aren’t pregnant or disabled. Before enforcing those requirements, states must receive a waiver from CMS. Ten states had already applied for waivers that include work requirements before today’s announcement.

Under federal law, Medicaid waivers have to support the program’s objectives by increasing coverage or health outcomes for people on Medicaid. The Obama administration concluded that making it harder for people to get health insurance does not make them healthier. As a result, CMS consistently rebuffed states’ attempts to introduce work requirements during Obama’s time as president.

The Trump administration has rejected that logic. CMS now argues that working and education lead to better health outcomes. CMS has used that to conclude that work requirements will improve health outcomes, even if they lead to people losing their health insurance. To back that up, today’s letter from deputy CMS administrator Brian Neale cites a smattering of studies finding that unemployment is bad for one’s health, and that making more money leads to living longer.

LaDonna Pavetti, a vice president at the left-leaning Center on Budget and Policy Priorities, argues that none of the studies CMS’ cites suggest that work requirements improve public health. She points out that one of the papers CMS links to even concluded that “interventions which simply force claimants off benefits are more likely to harm their health and well-being.” The National Health Law Program, a law firm that promotes access to health care, wrote in a letter to Neale that it “appears that CMS has decided on a policy position first and then cherry-picked a small number of studies.”

Joan Alker, the executive director of Georgetown University’s Center for Children and Families, tells Mother Jones that it’s clear from the way the announcement was crafted that CMS is preparing for a legal challenge. Leonardo Cuello, the National Health Law Program’s health policy director, told the Washington Post that they would be looking “very, very closely to the legal options” if CMS approves work requirements, adding that the policy shift is “not a good idea, and it’s illegal.”

While more than half of Medicaid recipients are children, there are still millions of adults who could face work requirements under the new CMS criteria. The Kaiser Family Foundation estimates that there are nearly 25 million non-elderly adults on Medicaid who are not on disability insurance. Nearly 8 in 10 are part of families where at least one person works, and 60 percent are working themselves. That still leaves millions who appear to be able to work. But a closer look reveals that many of those people face obstacles to entering the workforce. More than a third of those 25 million Americans say they are ill or disabled, and 30 percent say they’re taking care of “home or family.” Two-thirds of Medicaid recipients in Michigan who are “out of work” say they have a chronic illness.

Analyses of work requirements have found that they actually do little to boost long-term employment, according to Pavetti. A comprehensive study of 11 mandatory work programs found that only two decreased poverty.

In his letter to state Medicaid directors, Neale writes that states should consider aligning the work requirements they already have for people who receive welfare and food stamps with their new Medicaid rules. Welfare data suggests that could lead to many people losing Medicaid. After President Bill Clinton signed welfare reform into law in 1996, the share of families below the poverty line that receive welfare benefits dropped from 68 percent in 1996 to 23 percent in 2016, according to CBPP. Work requirements played a major role in driving that decline.

CMS says that states should “consider” not imposing work requirements on groups including caregivers, people with health problems, or full-time students. But Neale made clear that states are in the “best position to determine which approaches are most likely to succeed.”

Reports that CMS will sign off on Kentucky’s work requirement plan as soon as Friday suggest that states will have significant flexibility. The state’s proposal would require Medicaid beneficiaries to work, job search, or care for someone with a disability for 20 hours per week. Beyond the work requirement, Kentucky wants to have Medicaid recipients pay between $1 and $15 a month, disenroll people above the poverty line who fail to pay their premiums, and require people on the program to report job changes within 10 days. Those who don’t could lose their insurance for six months at a time.

Nearly 100,000 fewer Kentuckians are expected to have Medicaid under the plan. On a call with reporters on Thursday, CMS administrator Seema Verma said declines in enrollment would come from people no longer needing government health insurance: “We see people moving off of Medicaid as a good outcome.”

To be approved for a waiver, states have to show that their plan is revenue neutral. CMS is blocking states from using any savings derived from cutting off people’s Medicaid to achieve revenue neutrality. Alker says that seems like a good thing, though the “cynic” in her worries it’s designed to keep the question of how many people will lose Medicaid “even more in the dark.”

The Trump administration’s emphasis on work for Medicaid recipients is in stark contrast with its approach to taxes. As Mother Jones has written, Republicans’ tax bill explicitly advantages business owners who don’t rely on wages and salaries. A provision of the law that exclusively benefits heirs to fortunes that exceed $11 million will cost taxpayers $10 billion per year.