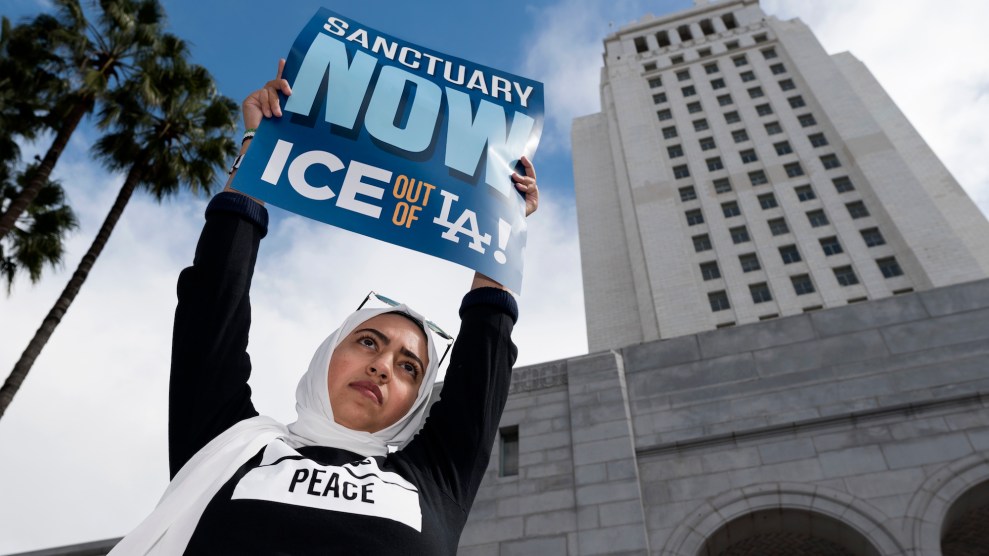 On Tuesday, the United States’ top immigration enforcement official said the government should bring criminal charges against politicians in sanctuary cities. The comment, from acting Immigration and Customs Enforcement (ICE) Director Thomas Homan, begs the now familiar question: Can the Trump really administration really do that?

The answer is almost certainly no. Homan’s argument relies on a statute that is typically used to target human smugglers; according to Bill Hing, a law professor at the University of San Francisco who runs the school’s Immigration and Deportation Defense Clinic, there’s no precedent, or even a strong legal case, for using it against politicians.

Homan, currently the acting head of ICE who Trump picked to be the agency’s permanent director in November, told Fox News’ Neil Cavuto that he believes sanctuary cities that limit cooperation with federal immigration officials are violating an “alien smuggling statute” by shielding them in their jails. “The Department of Justice needs to do a couple things,” Homan said. “Number 1, they need to file charges against the sanctuary cities.” As the interview wrapped up, he added, “We gotta start charging some of these politicians with crimes.”

Many of the United States’ largest cities, including Chicago, New York, and San Francisco, have embraced the sanctuary city label. Seth Stein, a spokesman for New York City Mayor Bill de Blasio, called the comments “unhinged and misinformed” in a statement sent to Mother Jones.

The federal statute in question— 8 U.S.C. 1324—makes it a crime for a person to harbor or shield unauthorized immigrants in “knowing” or “reckless disregard” of the law. Huyen Pham, a law professor at Texas A&M who focuses on immigration law and enforcement, tells Mother Jones it’s a “stretch” to think sanctuary cities are coming “anywhere close” to doing that.

Hing similarly says that those calling for charging sanctuary-city politicians are “shooting from the hip” and “don’t know what they’re talking about.” A successful case under the statute, Hing says, would involve something like bringing an undocumented immigrant into one’s home and then shielding them from ICE. What sanctuary cities actually do is “nowhere near” that, he adds. For one, sanctuary cities do not block immigration officials from making arrests within the city. Instead, they often limit information sharing and block local jails from keeping immigrants beyond their release date so that ICE can pick them up.

Cecillia Wang, the ACLU’s deputy legal director, echoed these sentiments and said in a statement that there is “no valid basis to prosecute any state or local official under federal criminal law for carrying out a sanctuary policy.”

In the interview, Homan took specific issue with California for enacting a “sanctuary state” bill that limits state and local officials’ roles in immigration enforcement. The legislation, which went into effect at the start of the year, blocks law enforcement officials from asking someone about their immigration status and from holding an immigrant in jail to assist ICE. It also seeks to make it harder for ICE to detain immigrants near courthouses, hospitals, and schools. Homan said the law puts his officers at risk by forcing them to arrest “dangerous criminals on their turf.”

The California law, though, continues to allow ICE to detain immigrants throughout the state. Local and state officials can also still share information with ICE if an immigrant has committed one of roughly 800 crimes. Nevertheless, Homan said ICE will respond to the law by “significantly” increasing the number of deportation officers in the state: “California better hold on tight.”

Pham, from Texas A&M, argues that big-city mayors likely won’t be scared-off by the administration’s legal case. And California Senate leader Kevin de León has said he’s ready to defend his state’s sanctuary law in court, while Evan Westrup, a spokesman for California Gov. Jerry Brown, said in a statement to Mother Jones that Homan should educate himself about the law “before frothing and fearmongering on Fox News.”

But smaller jurisdictions that are hesitant to pay for legal fees might be intimidated, Pham notes. The end result, she suggests, could be that the threat from those in the Trump administration’s is “more effective than the legal quality of their argument may lead us to believe.”