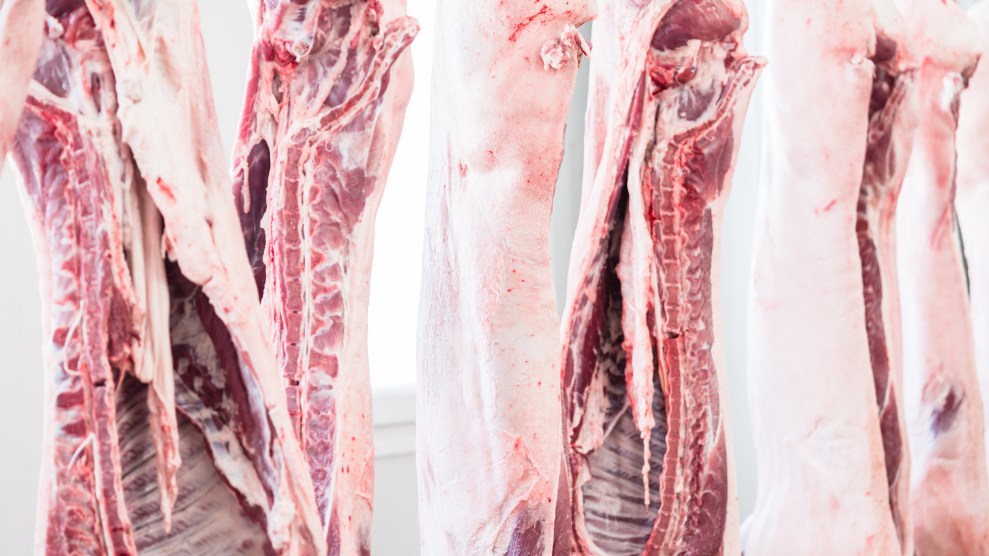 In a typical pork slaughterhouse, hog carcasses move down the conveyor belt at an average rate of around 977 per hour, or about 16 per minute. Workers tasked with disassembling these fast-moving 240-plus pound chunks of flesh endure high injury rates, which are likely even higher due to underreporting.

Now the Trump Administration’s US Department of Agriculture is pushing an overhaul that could significantly speed up that already-frantic pace. In a Friday press release, the USDA announced its intention to approve a new system for hog slaughter that reduces the role of USDA inspectors on the kill line, giving company employees direct oversight duties. Under this alternative slaughter system, pork companies would “determine their own evisceration line speeds,” the USDA notes.

Once the proposal is published in the Federal Register, there will be a 60-day public comment period before it’s finalized and put into effect.

The USDA has already been allowing five large-scale slaughter facilities to operate under the system, known as HIMP (short for Hazard Analysis and Critical Control Points-based Inspection Models Project) since 1997. In a 2014 report, the agency noted line speed at the five HIMP plants averaged 1,099 hogs per hour, with the fastest among them reaching 1,295 per hour.

While the USDA hails the HIMP model as a an effort to “modernize inspection systems through science-based approaches to food safety,” results of the pilot program have been less-than-stellar on the food safety font. A 2013 audit by the USDA’s Office of the Inspector General found that the USDA “did not provide adequate oversight” of the HIMP pilot over its first 15 years, and as a result, “HIMP plants may have a higher potential for food safety risks.”

The OIG reported that of the top 10 US hog plants earning the most food safety and animal welfare citations in the period of fiscal years 2008 to 2011, three were enrolled in the HIMP pilot. Moreover, by far the most-cited slaughterhouse in the United States over that period was in the program—it drew “nearly 50 percent more [citations] than the plant with the next highest number.”

Food safety and workers’ rights groups denounced the USDA’s proposed rule. “It is irresponsible for the USDA to expand a radical change to food safety responsibility in the pork industry based on a pilot program that clearly failed to show that allowing companies to inspect themselves can produce safe food,” Wenonah Hauter, executive director of Food & Water Watch, said in an emailed statement.

“The US Department of Agriculture’s proposed changes to the nation’s swine slaughter inspection system needlessly jeopardize consumers’ safety and the safety and well-being of the tens of thousands of workers who already endure exceedingly harsh working conditions to provide cheap meat to American consumers,” Debbie Berkowitz, senior fellow for worker safety and health with the National Employment Law Project, added in a statement.

The pork industry, predictably, celebrated the announcement. “We support the USDA’s decision to advance HIMP as it introduces new pork production efficiencies while encouraging the deployment of new food safety technologies in packing plants,” the National Pork Producers Council declared in a statement.

While the move fits into the Trump Administration’s ongoing pattern of zealous deregulation, “modernizing” inspection of slaughterhouse kill lines is very much a bipartisan endeavor. The USDA rolled out the HIMP pilot programs for hogs and poultry in 1997, under President Bill Clinton. The Obama USDA approved a similar plan for poultry slaughterhouses in 2014. There was a catch, though: After much pushback by workplace and food safety advocates, as well as media attention (including from me), the USDA decided in the end not to let poultry companies speed up the kill line.

Back in September, the National Chicken Council petitioned the Trump USDA to greenlight a 25 percent speedup on poultry kill lines—from the current maximum of 140 birds per minute to 175 birds per minute. That request “remains under review,” a USDA spokesman said.