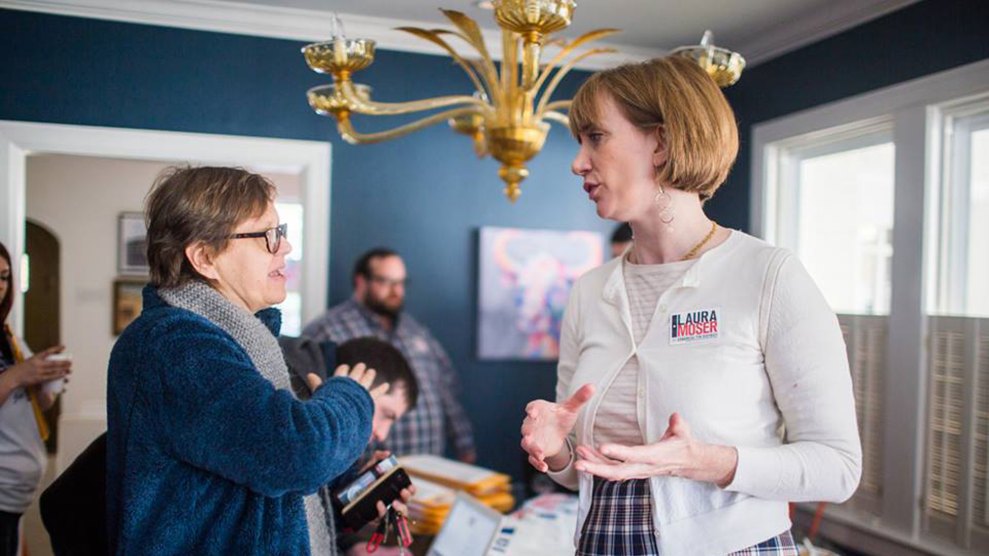 One of the open questions heading into the 2018 election was the extent to which groups like the Democratic Congressional Campaign Committee would interfere in competitive Democratic primaries. The DCCC, the official campaign arm of the House Democrats, was coming off a disappointing showing in the 2016 elections, and Donald Trump’s victory had heightened the skepticism of progressive activists toward the party’s legacy institutions. Moreover, Democrats were on the cusp of a historic candidate surge. Did the embattled DCCC really want to wade into the middle of that?

Evidently, the answer is yes. On Thursday, the organization launched a low-grade nuclear attack on Laura Moser, one of seven Democrats vying for the nomination to take on nine-term Republican Rep. John Culberson in Texas’ seventh congressional district.* The seventh swung harder to Democrats in 2016 than any other district in the country, and it’s an important part of the party’s plans of retaking the House. The primary is a little more than a week away, and although the top two candidates still have to compete in a May runoff, the DCCC didn’t want to take any chances that Moser would be one of them.

In a statement on the DCCC website, the organization stated its case against Moser thusly: “Democratic voters need to hear that Laura Moser is not going to change Washington. She is a Washington insider, who begrudgingly moved to Houston to run for Congress.” The crux of its criticism is that Moser recently relocated to the district from Washington, DC; that her husband is on the payroll of the fundraising firm she uses, Revolution Messaging; and that she once wrote something really mean about living in a rural Texas town.

It’s an unusual attack for a few reasons. Moser, who grew up in Houston before moving away, has caught fire in the race largely because of her pedigree as a first-time activist—after the 2016 elections, she launched an organizing tool, Daily Action, to make it easier for activists to bug their members of Congress. She was featured on the cover of Time. It’s a little strange to start off the year of the first-time woman candidate by stating that a leading Resistance activist is “not going to change Washington,” just as it’s unusual to see a freelance writer—Moser has written for Slate and penned a series of young adult novels—described unironically as a “Washington insider” by virtue of having once lived in the same city as the DCCC.

Equally confusing is what a DCCC spokeswoman characterizes as Moser’s “outright disgust for life in Texas”—which on closer reading refers to Moser once writing that she would rather have her teeth pulled than move to Paris, Texas. It’s not clear why residents of America’s fourth-largest city, which is comprised entirely of people who have chosen not to live in Paris, Texas, would take offense at such a dig. (It’s a bit like expecting Angelenos to leap to the defense of Barstow.) But there you have it.

Moser quickly shot back with a dig at “Washington operatives”:

The Moser-backing Democracy for America, the progressive campaign organization founded by Howard Dean in an earlier era of establishment vs. grassroots strife, jumped into the fray with a statement blasting the “faceless hacks…calling themselves Democrats” and “Republican-lite cheerleaders” at the DCCC.

So what’s this all really about? The Texas Tribune notes that some Democrats in Congress have been “quietly worried” about Moser, who has positioned herself to the left of the rest of the field and has a tendency to speak her mind on Twitter. Prior to this year, Democrats hadn’t seriously contested the seat in decades, and are perhaps wary of storming into a swing-district with a lefty loose cannon. To that end, national Democrats have tended to favor Lizzie Fletcher, a corporate lawyer running a more moderate campaign. EMILY’s List, which recruits and backs pro-choice women candidates, endorsed Fletcher last winter. But Fletcher has her own challenges—she was the only Democratic House candidate in the state that the AFL-CIO instructed its members specifically not to vote for, on account of her law firm’s role in a union-busting case.

Moser, for her part, has run for Congress in part by running in opposition to the DCCC. She frequently notes that no one from the organization asked her to jump into the race and she helped cement her national following by writing an op-ed for Vogue trashing DCCC chair Ben Ray Lujan’s disavowal of a reproductive rights litmus test for candidates. (“I have one idea of how to get more Democratic women to polling stations: Stand up for them,” she wrote.)

But one issue with the DCCC’s calculation here is that places like the seventh are competitive because of people like Moser and the kinds of activists she’s inspired. (Her campaign boasts donations from all 50 states.) By launching such a heavy-handed attack on Moser, in the first big primary of the 2018 cycle, the group just might be throwing a football at a hornets nest.

Correction: An earlier version of this article misstated the number of candidates in the Democratic primary.