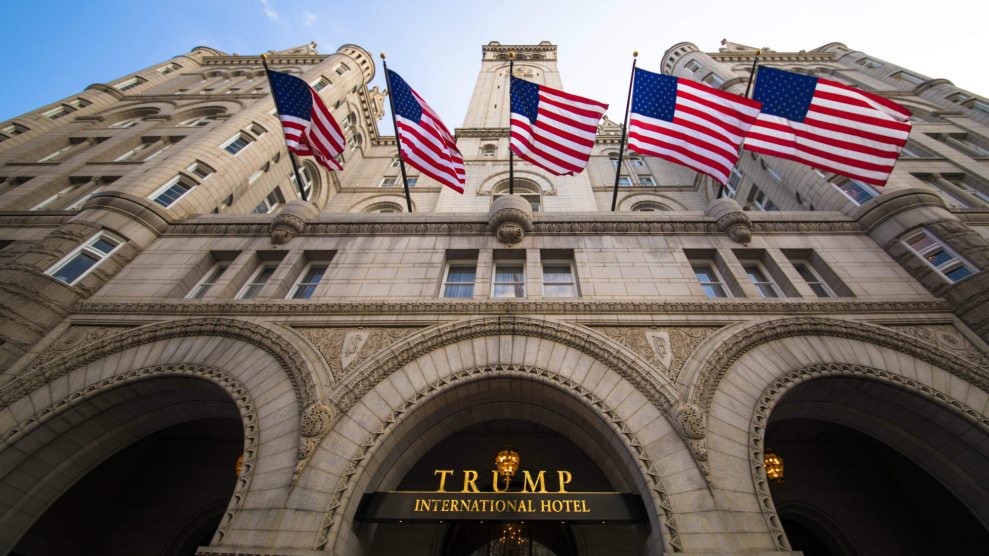 The Trump Organization released a statement on Monday announcing it had donated all profits earned from foreign government spending at Trump-owned hotels to the U.S. Treasury. But the company declined to say how much profit was donated, where it was earned, and how the company calculated the size of its payment.

When he took office in January 2017, President Donald Trump agreed to give up day-to-day control of his sprawling empire. But he refused to sell any part of it, meaning that the fortunes of each of his hotels and resorts would continue to be tied to his personal fortune. As the owner of a string of luxury properties, including one just blocks from the White House in Washington D.C., where many high end hotels cater to foreign government delegations and diplomatic soirees, critics saw the opportunity for huge conflicts. If a foreign government booked a block of hotel rooms, or a ballroom, at a Trump property, the profit from this spending would be, in effect, a personal payment to the president.

And almost immediately upon Trump’s ascension to the highest office, foreign dignitaries did begin flocking to his D.C. hotel. Shortly after the 2016 election, an Asian diplomat told the Washington Post, “Why wouldn’t I stay at his hotel blocks from the White House, so I can tell the new president, ‘I love your new hotel!’? Isn’t it rude to come to his city and say, ‘I am staying at your competitor?’” In late January 2017, nearly 100 foreign diplomats partied in one of its ballrooms, while Kuwait moved its annual National Day celebration from the Four Seasons to Trump’s DC hotel. In a May filing under the Foreign Agent Registration Act, the government of Saudi Arabia reported spending $270,000 renting rooms at Trump’s D.C. hotel.

Critics say the payments from foreign governments represent a violation of the Constitution’s emoluments clause, which bans federal office holders from accepting payments or gifts from foreign governments. The clause was written at a time when the Founding Fathers were concerned about European princes trying to gain favor with American diplomats through gifts of titles, land, or even fancy horses. The question of how it might apply to a president who personally owns luxury hotels continues to wind through the federal court system.

“This annual donation represents profits from foreign government patronage for the period beginning January 20, 2017 through December 31, 2017 and was calculated in accordance with our policy and the Uniform System of Accounts for the Lodging Industry,” Sorial said in his statement. “Although not a legal requirement, this voluntary donation fulfills our pledge to donate profits from foreign government patronage at our hotels and similar business during President Trump’s term in office.”

“This voluntary donation fulfills our pledge to donate profits from foreign government patronage.”

The statement failed to provide information on how much business the president’s company actually conducted with foreign governments, at what hotels, and how accountants calculated profit. In 2017, the Trump Organization circulated a short pamphlet to its hotel managers with brief instructions on how to calculate foreign profits—with the first piece of advice being that managers should not actually calculate the profits, but rather estimate them. Calculating would require a great deal of effort, the pamphlet noted.

“To attempt to individually track and distinctly attribute certain business-related costs as specifically identifiable to a particular customer group is not practical, nor would it even be possible without an inordinate amount of time, resources and specialists,” the pamplet stated.

The pamphlet also warned hotel management against prying too deeply when determining if customers were representatives of foreign governments, because “putting forth a policy that requires all guests to identify themselves would impede upon personal privacy and diminish the guest experience of our brand.”

The pamphlet offered a brief formula, suggesting that if, for example, a hotel had a 15 percent profit overall, and knew it had earned $500,000 from foreign governments, it should donate 15 percent of $500,000. The formula didn’t take into account the realities of Trump’s complicated business structures—for example, no donation would be required if a foreign government’s patronage occurred at properties that lose money or break even.

Asked if the Trump Organization would be releasing any figures to show how much was donated, what properties the profits were earned at, and how, in the end, the profits were determined, Sorial said there would be no further comment at this time.