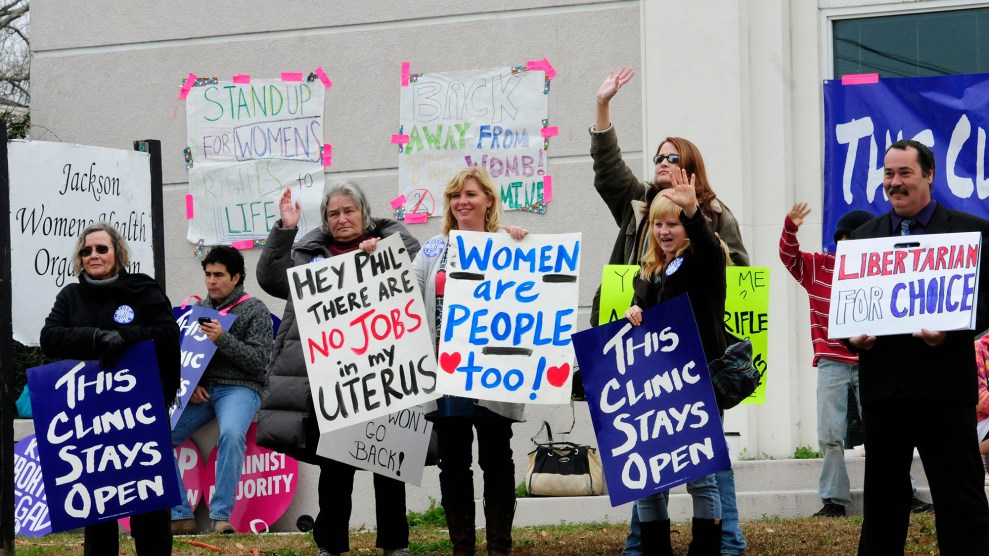 Supporters of the pro-choice movement and the Jackson Women's Health Organization on the 40th anniversary of Roe v Wade in 2013. Suzi Altman/ZUMA

Less than 24 hours after Mississippi Gov. Phil Bryant signed the nation’s most restrictive abortion ban into law, a judge has granted a temporary restraining order against the law in response to a suit filed by the Center for Reproductive Rights and Mississippi’s sole abortion clinic.

“The law threatens immediate, irreparable harm to Mississippians’ abilities to control their ‘destiny and . . . body,'” District Judge Carlton Reeves wrote in his brief, two-page decision on Tuesday. “This is especially true for one woman scheduled to have a 15-week abortion this afternoon.”

The law, which makes abortions after 15 weeks illegal, only allows exceptions in cases in which the mother’s life is in danger or there is a fetal abnormality that is “incompatible with life.” The Center for Reproductive Rights and Jackson Women’s Health Organization filed suit yesterday afternoon challenging the constitutionality of the law, shortly after the governor signed the bill, which took effect immediately.

Last year, the Center for Reproductive Rights won a permanent injunction over a separate Mississippi law that had required abortion providers to have admitting privileges at a local hospital—a move that allowed the embattled abortion clinic to remain open.