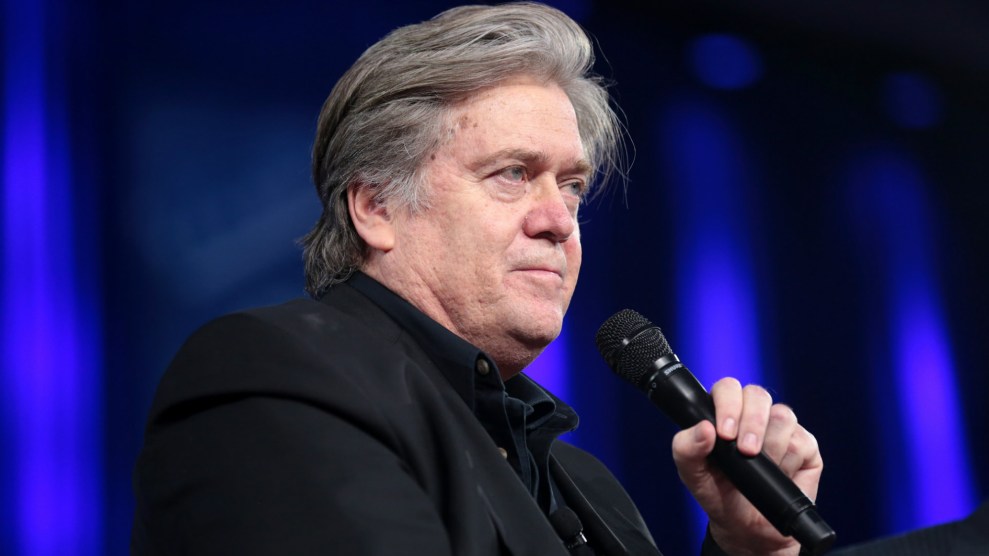 Former White House strategist and Trump whisperer Steve Bannon has a message for members of France’s far-right, xenophobic National Front party. “Let them call you racist,” he told the crowd at the party’s congress in Lille on Saturday. “Let them call you xenophobes. Let them call you nativists. Wear it as a badge of honor. Because every day, we get stronger and they get weaker.”

Bannon, who was swept out of the White House after unflattering quotes of his appeared in Michael Wolfe’s book Fire and Fury, is currently traveling Europe and whipping up support for various nationalist and anti-immigrant parties. “They see what Breitbart did and they want it in their own language,” he told the New York Times, referring to the right-wing site he left in January. “That’s the key. Right now my sites are in English. They want one in their own language.”

He told the Times that he had a “fascinating” meeting earlier this week with the leaders of the hardline Alternative for Germany party. The AfD, now the third-largest party in Germany, is hostile toward immigrants and Muslims, arguing for stricter immigration controls and bans on minarets and niqabs. Not long ago, two AfD officials responded to a public service announcement by German police that ran in Arabic as well as German by tweeting, “Are they seeking to appease the barbaric, Muslim, rapist hordes of men?”

The Times also reported that Bannon might meet with Hungarian Prime Minister Viktor Orbán, an autocratic figure who has cracked down on his country’s media, judiciary, and electoral system. Blocking immigrants from entering Hungary is arguably Orbán’s signature issue. Bannon, who declined to say whether he was meeting with the Hungarian leader, called him a “hero” and “the most significant guy on the scene right now.”

And Bannon has embedded himself in Italian politics, lending a hand to the populist forces now on the rise in that country.

In France, Bannon reportedly met with the National Front’s leader, Marine Le Pen, who was defeated in last year’s presidential election by centrist Emmanuel Macron. He called Le Pen’s niece, Marion Marechal-Le Pen, a young leader in the National Front, a “rising star.” In his remarks to the National Front party congress, he said his travels had left him confident that his brand of nationalism was on the rise around the world. “In Japan and Korea, the Middle East, from Kansas and Arizona to Alabama and now in western Europe,” he said, “history is on our side.”