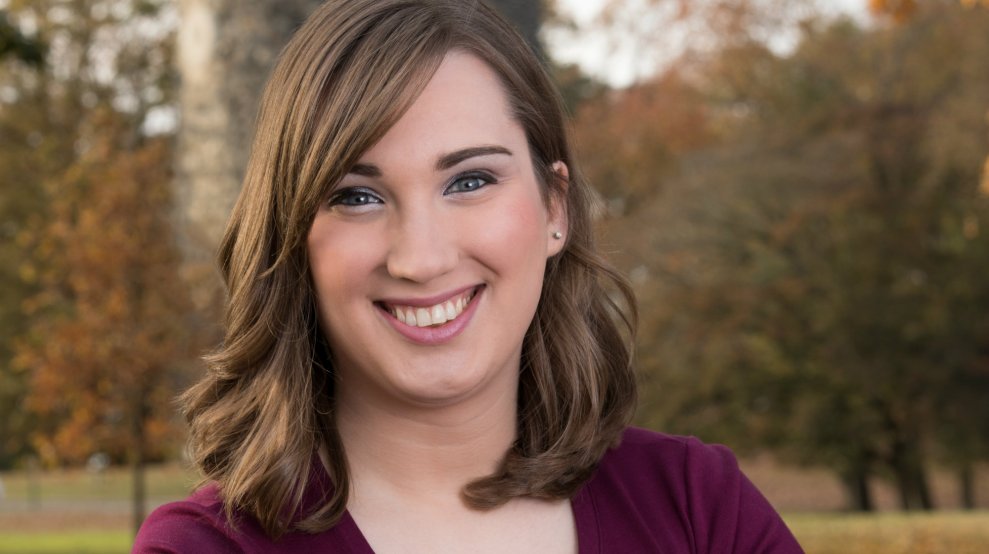 Out March 6, Tomorrow Will Be Different: Love, Loss, and the Fight for Trans Equality certainly grapples with McBride’s coming out and transition, but the book is also part of a shift in trans storytelling that transcends gender issues. McBride’s memoir focuses heavily on her political journey and her heartbreaking romance with her late husband, who died of cancer four days after they were married. I sat down with McBride at the Human Rights Campaign, the nation’s largest LGBT advocacy organization, where she now works as press secretary, to talk about her past—and America’s future.

Sarah McBride: One of the really inspiring things is that as transgender people we can live our truth and still pursue our dreams. Growing up, that was incomprehensible to me. Seeing kids today who are both themselves and still dreaming big dreams demonstrates for me how far we’ve come. It gives me a lot of hope in these particularly challenging times.

MJ: You were active in politics in Delaware, working on campaigns even in high school, and working closely with powerful state leaders like former Gov. Jack Markell and the late Beau Biden, who was the state’s attorney general when you came out. How did you break the news to them?

“The relationship I had with Beau [Biden] may have contributed to the vice president being even more of a vocal champion of LGBTQ rights.”

SM: Next to my parents, Jack and Beau were two of the people that I was most nervous to tell because they had spent so much time mentoring me and supporting me. I worried that they would be disappointed and that they’d feel like all of their effort was for naught. I worried that just their relationships with me would be a liability for them. I told Jack a couple of months after I told my parents. I called his staffer and explained that I was transgender. Immediately, I got a call from the governor, who did not miss a beat, and who made clear that he and the first lady loved me and supported me and would be there for me and were proud of me. The message was the exact same from Beau. I didn’t come out to Beau until I came out publicly.

MJ: You were so close with Beau that people often asked if you were his child. How did that relationship develop from professional to personal?

SM: I started interning on his campaign. There weren’t many folks my age working in Delaware politics. We just had an easy rapport. I took on a job driving Beau when I was in college, so we got very close in the car and developed a real friendship through that.

MJ: Shortly after you came out, former Vice President Joe Biden, who wrote the foreword for your book, started publicly calling trans rights the civil rights issue of our time. Did your relationship with Beau have anything to do with that?

SM: I was probably closer to Beau than any other trans person was, and I think that in many ways I provided Beau and Jack and other people in my circle with a face and a name to a community that had long been ignored. The relationship I had with Beau may have contributed to the vice president being even more of a vocal champion of LGBTQ rights, and trans rights in particular. I think the vice president sees in his life a mission to help preserve and extend Beau’s legacy—and this is part of Beau’s legacy.

MJ: Of course I have to ask about your big DNC speech. What was it like to get up before that crowd knowing you were the first out trans person ever to address a major party’s convention?

SM: It was a truly affirming experience, particularly for someone who—embarrassingly—built a stage in my bedroom with a podium where I stood at and recited Barack Obama’s 2004 convention speech over and over again when I was 13! To come from a place where I thought I was going to be a political liability for merely existing to be able to stand onstage at a national convention, in just the span of four years, was life changing.

“Transgender people should be treated with dignity and respect not because of how we look [but] who we are.”

MJ: The selfie you took in a North Carolina bathroom when you were fighting against HB2, the state’s anti-trans law, went viral. You were dismayed that a lot of supporters were making comments about how it’s obvious you belong in the women’s bathroom because of the way you look. Why is that a problem?

SM: Transgender people should be treated with dignity and respect not because of how we look [but] who we are. Our access to a restroom, our access to public spaces, our access to daily life should not rest on whether we blend in.

MJ: What does your book illustrate about the state of trans storytelling?

SM: We are seeing a trend toward more multidimensional storytelling, where we’re not just talking about the coming out or the transition. We’re seeing stories of trans people in our full humanity, our hopes and our dreams and our loves and our fears.

MJ: A lot of your book focuses on your relationship with Andy and his battle with cancer. You even mentioned him during your DNC speech. Why is his story so important to keep sharing?

SM: My experience with Andy underscores for me that change cannot come fast enough. Every single time we ask any marginalized person to sit back and watch a slow conversation occur before they are treated with dignity and respect, we are asking that person to watch their life pass by without the equal protection of the laws and equal treatment by society. That is too much to ask of any person.

MJ: When can we expect to see your name on a ballot?

SM: Oh my gosh. I feel like I’ve had a lot of life in the last five years, and there’s part of me that just wants to enjoy as much as possible my 20s. I do believe that politics is the place where every aspect of society converges, and elected office is the most effective way to effect change. Maybe that’s another part of my life.