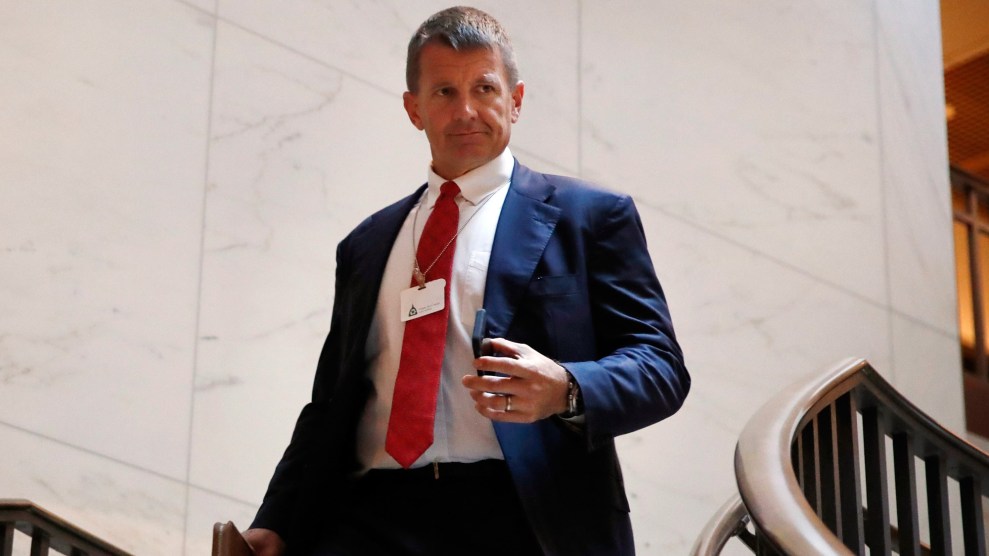 Last April, the Washington Post reported that Blackwater founder Erik Prince had a secret meeting with a Russian close to Vladimir Putin to establish back channel communications between the Kremlin and then-President-elect Donald Trump in advance of the inauguration. Prince denied the allegations, but now, it sounds like special counsel Robert Mueller has evidence.

In January 2017, Erik Prince, the founder of the private security company Blackwater, met with a Russian official close to Russian President Vladi­mir Putin and later described the meeting to congressional investigators as a chance encounter that was not a planned discussion of U.S.-Russia relations.

A witness cooperating with Mueller has told investigators the meeting was set up in advance so that a representative of the Trump transition could meet with an emissary from Moscow to discuss future relations between the countries, according to the people familiar with the matter, who spoke on the condition of anonymity to discuss sensitive matters.

George Nader, a Lebanese American business who helped organize and attended the Seychelles meeting, has testified on the matter before a grand jury gathering evidence about discussions between the Trump transition team and emissaries of the Kremlin, as part of Mueller’s investigation into Russian efforts to interfere with the 2016 election.

Nader began cooperating with Mueller after he arrived at Dulles Airport in mid-January and was stopped, served with a subpoena and questioned by the FBI, these people said. He has met numerous times with investigators.

A spokesman for Prince “referred to his previous statements to the committee and declined further comment” when asked about the allegations by The Washington Post.

Prince, an outspoken Trump supporter whose sister, Betsy DeVos, serves as Trump’s education secretary, previously told the House Intelligence Committee that the meeting in the Seychelles with Kirill Dmitriev, who oversees a wealth fund controlled by the Russian government, was not planned and that he had been discussing business possibilities at a hotel with United Arab Emirates officials. The Washington Post reported last year that the secret meeting had been arranged by the crown prince of Abu Dhabi, Sheikh Mohamed bin Zayed al-Nahyan, and his brother, shortly after Zayed visited the United States, to “explore whether Russia could be persuaded to curtail its relationship with Iran, including in Syria.”