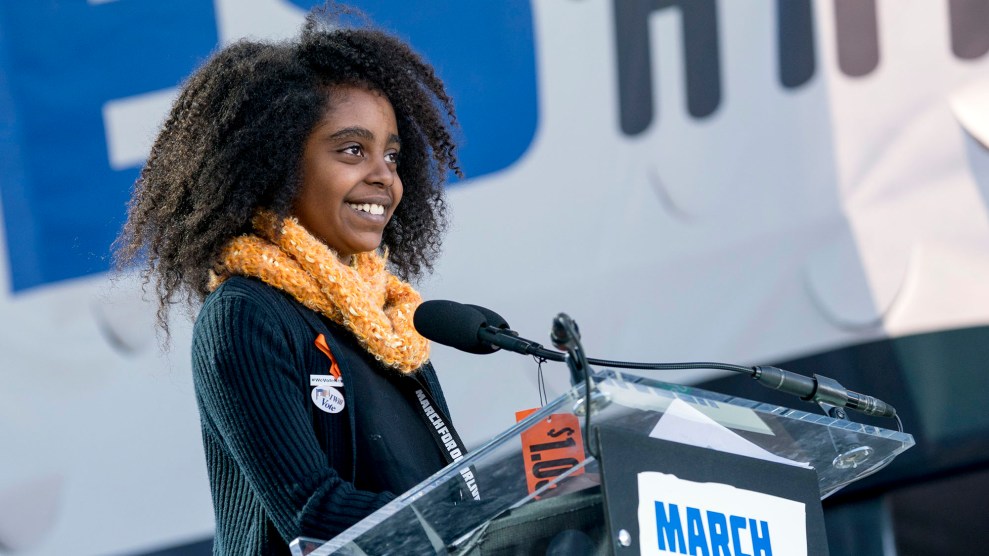 Naomi Wadler, 11, a student at George Mason Elementary School, speaks during the "March for Our Lives" rally.Andrew Harnik/AP

Naomi Wadler, an 11-year-old girl from Alexandria, Virginia, thrilled hundreds of thousands when she spoke out for “the African-American girls who don’t make the front page of every national newspaper” at the March for Our Lives rally in Washington, DC, on Saturday.

On March 14, Wadler led a walkout at George Mason Elementary School to honor the victims of gun violence that lasted 18 minutes— 17 to commemorate the victims of the Marjory Stoneman Douglas High School shooting in Parkland, Florida, and an extra minute for Courtlin Arrington, a 17-year-old senior killed by gun violence earlier this month in Birmingham, Alabama.

11-year old Naomi Wadler: "My friends and I might still be 11, and we might still be in elementary school but we know… that we stand in the shadow of the Capitol, and we know that we have 7 short years until we too have the right to vote." (via CBS) pic.twitter.com/57tmzKBss4

Wadler spoke to loud cheers and was remarkably poised. “For far too long, these names, these black girls and women, have been just numbers,” she said. “I’m here today to say never again for those girls, too.”

Many of the speakers at the march acknowledged the emerging political power of young activists, but Wadler put it best when she said: “We know that we have seven short years until we too have the right to vote.”

Naomi is co-organizing a walkout at her elementary school with morning with Carter, who is also 11. “Some parents have felt that we’re not old enough to know about it,” Carter said. “Like they think because we’re 5th graders we don’t know anything about what’s happening.” pic.twitter.com/RSty6cH7VY

She ended by quoting Toni Morrison: “If there’s a book that you want to read but it hasn’t been written yet, then you must be the one to write it.”