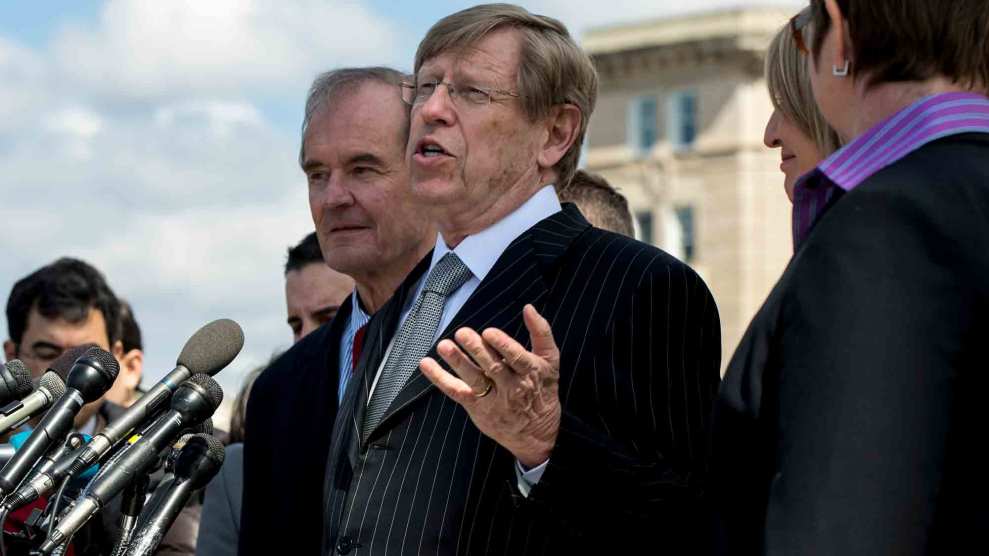 On Sunday, President Donald Trump reacted to news reports that he was having trouble recruiting lawyers for his legal team. “Many lawyers and top law firms want to represent me in the Russia case…don’t believe the Fake News narrative that it is hard to find a lawyer who wants to take this on. Fame & fortune will NEVER be turned down by a lawyer, though some are conflicted,” he tweeted. “Problem is that a new….lawyer or law firm will take months to get up to speed (if for no other reason than they can bill more), which is unfair to our great country – and I am very happy with my existing team.”

But it might be true that there is little demand for Trump as a legal client.

On Monday, I bumped into GOP super-lawyer Ted Olson. Last week, the Washington Post reported that Trump’s legal crew had asked Olson if he would join its ranks. His law firm quickly shot down the possibility of Olson riding to Trump’s rescue, noting that there were too many potential conflicts of interest. Then attention turned toward Joe diGenova and Victoria Toensing, lawyers and conservative Fox-favorite conspiracy theorists who are former Justice Department officials. It was announced that they would be joining Team Trump. Two days later they were un-announced.

I asked Olson about being recruited for Trump’s squad. He rolled his eyes, suggesting that this was never going to happen and that it was not just a matter of conflicts. (Though a conservative stalwart, Olson has in recent years enhanced his reputation by becoming a forceful advocate for gay marriage. Associating with Trump could well tarnish that shine.)

So this didn’t get too far? I queried. Olson shrugged in an I’m-not-getting-into-details way. “Who knows how these trial balloons happen?” he said, in a manner that definitely suggested he knows how they happen. He then joked, “Joe [diGenova] lasted longer. At least two days.”

So is Trump going to have trouble finding attorneys? Olson shrugged again. “Let me ask this a different way,” I said. “In the last few days has any lawyer come up to you and said, ‘I’m willing to work for Trump?'”

Washington, I noted, is full of Republican lawyers who generally do not mind being in the middle of headline-generating scandals and earning a bit of notice. Olson laughed: “That’s right.” And not one of them had contacted him to say he or she was willing to sign up? “No,” he repeated.

Trump seems to believe he’s a hot ticket for DC’s top legal talent. The word on the street is different.