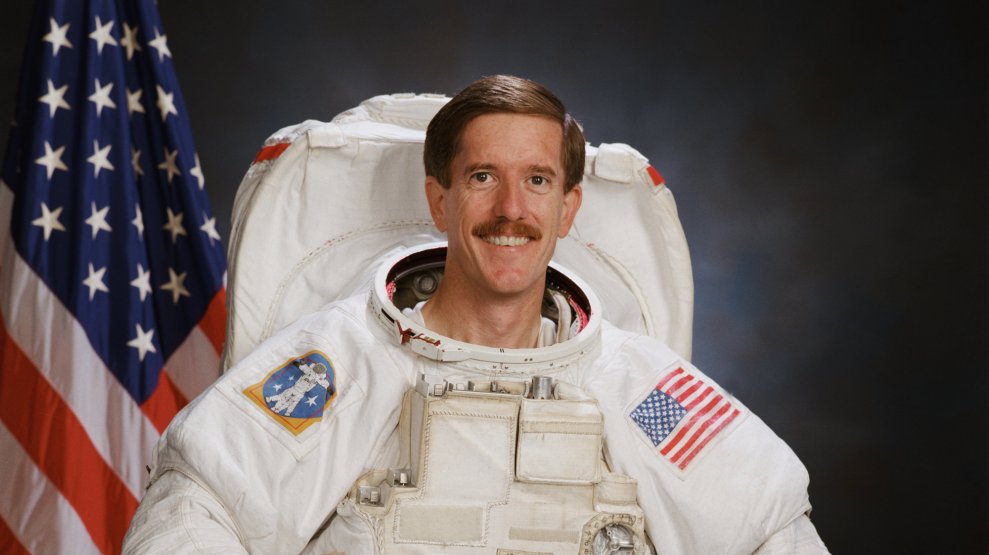 A former astronaut and petroleum geologist tapped by President Donald Trump to lead a high-profile government science agency answered questions from senators on Tuesday. One topic of discussion at the nomination hearing for James Reilly: a scientific integrity controversy unveiled by Mother Jones last month.

The US Geological Survey, part of the Department of the Interior, is a scientific agency that studies the country’s landscape, natural resources, and natural hazards. But lately, the USGS has been rocked by political controversy. In a story last month for Mother Jones and The Nation Institute’s Investigative Fund, Adam Federman reported that a top USGS scientist resigned in protest last year after political leadership at the Interior Department requested early access to data on oil and gas deposits in Alaska. Lawmakers have since demanded answers from Interior Secretary Ryan Zinke about why political appointees in his department sought the sensitive data and whether they reviewed it before the report was made public.

In his resignation letter, obtained by Mother Jones, [former USGS energy and minerals head Murray] Hitzman said he was leaving the USGS because the agency had agreed to provide…Zinke with data from the Alaska energy assessment “several days in advance of the information’s public release, in contradiction of my interpretation of USGS fundamental science policy.”

It’s unclear why officials at the Interior Department…wanted to see the study in advance or if they ever actually viewed it before it was published. There’s no evidence that Zinke or anyone else sought to alter the findings or use the information for improper purposes. But critics say the administration’s actions fly in the face of decades of established practice and contradict written ethical guidelines—guidelines that are designed to ensure the integrity of the agency’s scientific research and prevent it from being exploited by anyone seeking an unfair economic advantage.

A second USGS scientist, Larry Meinert, who was deputy associate director of the energy and minerals program, told Mother Jones that he, too, recently left the agency in part because of what he viewed as pressure on scientists to violate the guidelines. “That is part of the reason why I too have now left the USGS and the public service that I was proud to perform,” Meinert said in an email.

At Tuesday’s hearing, Washington Sen. Maria Cantwell, the top Democrat on the Energy and Natural Resources Committee, asked Reilly about the controversy. “Scientific integrity has got to be a key element of the USGS,” Reilly responded. “It’s an independent organization that is designed to deliver unbiased science to the decision makers.”

Reilly added that he didn’t know the details surrounding the departures of Hitzman and Meinert, but he suggested that it might sometimes be appropriate for USGS scientists to share sensitive data with officials leading the Interior Department. “In my other occupations up to this point, I always felt like I had a responsibility to deliver information to my leadership, particularly if it had an impact on how the leadership is supposed to respond to it,” he said.

If someone within USGS was uncomfortable with such a request in the future, that person would be able to come to him to discuss those concerns, Reilly told the committee. “We would deal with that specific example at the time and hopefully we wouldn’t get into the situation that occurred here,” Reilly said. He added that if he was ever faced with political pressure to alter scientific findings, he would “politely decline.”

In January, Reilly became only the second person with a PhD in science to be nominated by Trump to lead a major science agency. (Francis Collins, director of the National Institutes of Health, was the first).

“It’s refreshing to see the administration nominate someone scientifically qualified,” said Gretchen Goldman, the research director for the Center for Science and Democracy at the Union of Concerned Scientists. “USGS has a history of having high-quality, nonpartisan heads. We hope he continues that tradition.”

Reilly earned his bachelor’s, master’s, and doctoral degrees in geosciences from the University of Texas at Dallas. For over a decade, he worked as chief geologist at the Dallas-based oil and gas company Enserch Exploration. In 1994, NASA selected Reilly for its astronaut program.

During his 13-year NASA career, he logged more than 800 hours in space, including five space walks. After leaving the space agency, Reilly worked for the American Public University System, a for-profit online university, first as dean of the School of Science and Technology and then as associate vice president of strategic relations for STEM programs. He currently serves as a space operations expert to the US and allied militaries, and is a technical adviser for the Air Force’s National Security Space Institute.

“It’s refreshing to see the administration nominate someone scientifically qualified.”

Members of the Senate committee seemed impressed by Reilly’s resume. “Clearly your background in geosciences and geology, as well as your service to our nation, makes you qualified,” said Sen. Lisa Murkowski (R-Alaska), who chairs the committee.

“It’s hard sometimes to find good recruits, and you seem to be the best of the best,” said committee member Sen. Joe Manchin (D-W.Va.).

In addition to asking about Reilly’s commitment to upholding the USGS’s scientific integrity, committee members questioned Reilly about his plans for the agency’s budget. Earlier this year, the Trump administration proposed to cut the USGS budget by 20 percent, eliminating roughly 1,200 jobs and slashing funds for natural hazard preparation and earthquake early warning detection.

Reilly responded that he would spend his first 30 days working with the bureau’s core mission areas to eliminate overlap and look for places to “cut without significant impact.”

Marcia McNutt, president of the US National Academy of Sciences and USGS director from 2009 to 2013, told Eos in an interview in January that the director “must be the main champion for the bureau” on issues such as its budget. “Dr. Reilly may at times need to stand up for the independence of USGS science and have his scientists’ backs,” she said.

In December, the Interior Department blocked hundreds of USGS scientists from attending the American Geophysical Union’s annual meeting, the biggest conference in their field, the Washington Post reported. The department told the Post the decision was a cost-saving measure. AGU Vice President of Public Affairs Lexi Shultz said in a statement the organization has “voiced concerns” about the ability of USGS scientists to travel to important scientific meetings. “We hope Dr. Reilly will be supportive of this pivotal type of scientific collaboration,” Shultz said.

Reilly’s nomination will now go to the full Senate. If confirmed, he would take over for acting director William Werkheiser.

For now, science advocates are cautiously optimistic about Reilly’s appointment. “All eyes will be on Reilly when it comes to making sure there is not undue influence on the science at USGS,” Goldman said.