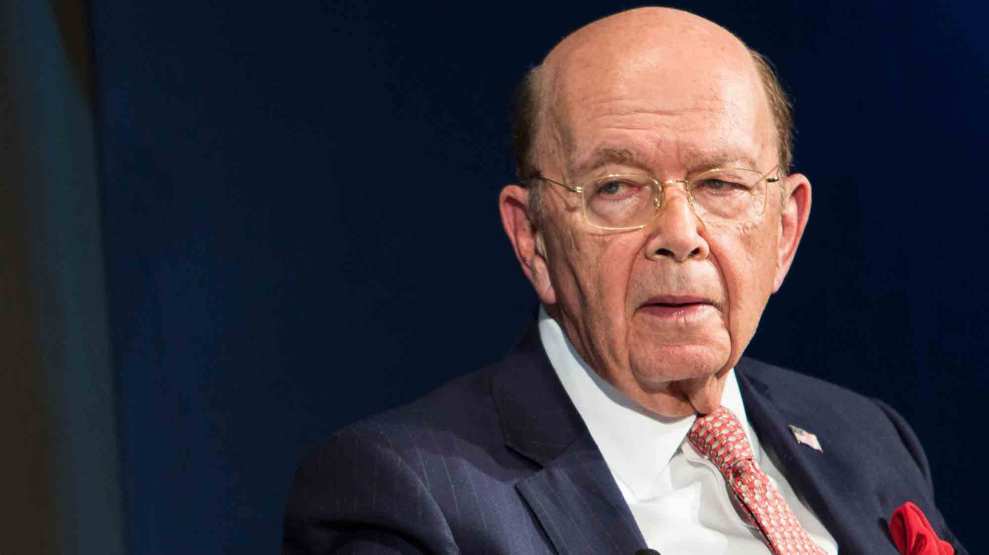 Last week, the Trump administration slapped sanctions on a small group of Russian oligarchs as punishment for what Treasury Secretary Steven Mnuchin called Moscow’s “malign activity around the globe,” including Vladimir Putin’s military intervention in Ukraine, his support of the murderous Syrian regime, and his subversion of Western democracies. One of the oligarchs on the list was Viktor Vekselberg, who was identified as the founder and chairman of the Renova Group, which manages investment funds in several sectors of the Russian economy. But one intriguing bit of information was left out of the Treasury Department’s description of Vekselberg: he was recently a business associate of Wilbur Ross, President Trump’s commerce secretary.

Ross and Vekselberg were each a major investor in a Cyprus bank that had been linked to dirty Russian money—a connection that Ross tried to downplay when he faced confirmation before the US Senate last year.

In 2013, amid a financial crisis in Cyprus, the country’s largest financial institution, the Bank of Cyprus, collapsed and was bailed out. Billions of dollars in deposits were held by wealthy Russians, with presumably a good chunk of these funds deposited to evade notice or taxes. As part of the bank’s rescue, much of its holdings were converted into shares of the bank, giving Russian plutocrats majority ownership of a European bank—a notion that unnerved European financial powers. In swooped Ross, the billionaire investor whose specialty was snatching up troubled ventures. He led a 1 billion euro buyout of the Bank of Cyprus in 2014, and his group became the leading investor in the institution. On the heels of that deal, Vekselberg’s Renova Group entered the picture and became the bank’s second-largest shareholder.

As might be expected of any Russian financial titan, Vekselberg had the confidence of Putin. He had earned the Russian leader’s favor by spending more than $100 million to acquire the famous Fabergé eggs and repatriating them to Russia. Vekselberg was also placed in charge of a Russian initiative to bring high-tech firms into the country. So here was Ross in bed with a Russian oligarch, both of them looking to make big bucks by taking over a bank with a somewhat shady background.

After Trump nominated Ross to be commerce secretary, several Democratic senators asked Ross about his involvement with Vekselberg. A group of these lawmakers led by Sen. Bill Nelson (D-Fla.) sent him a list of questions about his ties to the Bank of Cyprus and the oligarch. (After being nominated, Ross had said he would divest his financial interest in the bank.) In a conversation with Nelson, Ross dismissed talk of his relationship with Vekselberg and claimed that he had only met the Russian once for an hour. But prior to the confirmation vote, the White House refused to release Ross’ answers to the senators’ questions—a move that angered several Democrats in the body. And in a written response to one question submitted to Ross by Sen. Maria Cantwell (D-Wash.), Ross insisted that Vekselberg had not been his partner.

But Ross and Vekselberg had been working together. In October 2014, Ross announced his proposal for a new board of directors for the bank. The directors on his list would include Maksim Goldman, a representative of Vekselberg’s Renova. And the chairman of the board—recruited by Ross and Vekselberg—would be Josef Ackermann, a former CEO of Deutsche Bank who was then a director of Renova Management AG, an industrial holding company controlled by Vekselberg. As Bloomberg reported at the time, “Ross, whose group owns 17 percent of the bank, plans to share the vice-chairman post with Vladimir Strzhalkovskiy, who served with Putin in the KGB in the 1980s.”

So let’s rewind the tape: Ross was collaborating directly with Vekselberg to profit from the revival and reorganization of the Bank of Cyprus, and this included proposing to place Vekselberg’s associates in key leadership roles of the bank. This was not an unusual move, given Vekselberg’s large holdings in the institution. But Ross’ relationship with the oligarch went far beyond a one-time, hour-long meeting. A good follow-up question for the senators would be why Ross had indicated he had little to do with Vekselberg.

Ross is not Vekselberg’s only connection to Trump World. In early 2017, Andrew Intrater, the CEO of Columbus Nova, the lone American subsidiary of Renova Group, donated $250,000 to Trump’s inauguration fund. Intrater had no previous record of making large political contributions. In June 2017, he also kicked in $35,000 to a joint fundraising committee for Trump’s reelection and the Republican National Committee. Intrater, an American citizen, is Vekselberg’s cousin, according to filings with the Securities and Exchange Commission.

In announcing its recent sanctions on Russia, the Treasury Department suggested that Vekselberg runs a corrupt outfit. Its press release noted, “In 2016, Russian prosecutors raided Renova’s offices and arrested two associates of Vekselberg, including the company’s chief managing director and another top executive, for bribing officials connected to a power generation project in Russia.” And Mnuchin declared, “Russian oligarchs and elites who profit from [Russia’s] corrupt system will no longer be insulated from the consequences of their government’s destabilizing activities.” Well, Ross was doing business with this profiting-from-corruption oligarch until Ross was tapped by Trump to join his cabinet. And this remains one of the Trump-Russia connections that still warrants greater explanation.