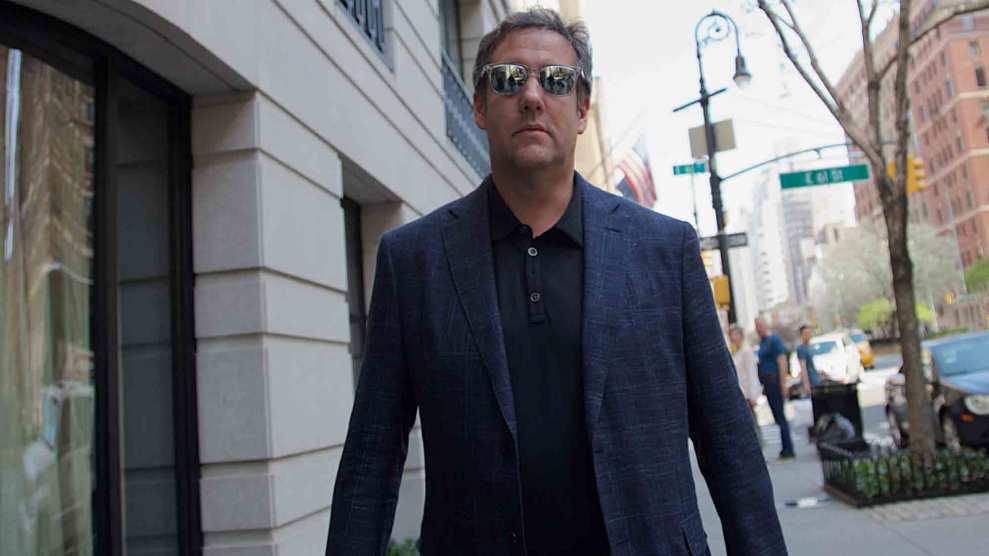 Once again, the Michael-Cohen-in-Prague allegation is back in the news, and I found a small piece of evidence pertaining to this mystery.

The story began with the Steele memos—those reports filled with allegations (salacious and non-salacious) about contacts between Russians and Donald Trump and a yearslong Moscow effort to cultivate and co-opt Trump. In the October 19, 2016, report Christopher Steele sent to Fusion GPS, the corporate research firm that had retained him for a Democratic-funded project, the former British counterintelligence official, wrote:

This report claimed that Cohen, Trump’s well-known fixer, had secretly met with Russian officials in an EU country that August. The next day, Steele sent Fusion GPS a new memo noting this Kremlin insider source had said the supposed Cohen meeting had taken place in Prague.

Ever since the Steele memos became public in January 2017—when BuzzFeed posted the documents—Cohen has steadfastly denied participating in any such meeting. Last week, when McClatchy reported that special counsel Robert Mueller has evidence that Cohen did secretly travel to Prague in the summer of 2016—a report no other media outlet has yet confirmed—Cohen revived his denial. He tweeted, “Bad reporting, bad information and bad story by same reporter Peter Stone @McClatchyDC. No matter how many times or ways they write it, I have never been to Prague. I was in LA with my son. Proven!”

Bad reporting, bad information and bad story by same reporter Peter Stone @McClatchyDC. No matter how many times or ways they write it, I have never been to Prague. I was in LA with my son. Proven! https://t.co/ra7nwjUA0X

What was interesting (at least to me) was Cohen’s claim that he had never—never ever—been to Prague.

I was one of the first reporters to see the Steele memos—and the first to report their existence in a piece I published on October 31, eight days before the 2016 election. In that article, I did not reveal the sordid but unconfirmed allegations about you-know-what. But I noted two key points: that the memos raised the disturbing possibilities that Putin’s regime was both collaborating with and penetrating Trump’s circle, while collecting possible blackmail information on Trump, and that the FBI was investigating the material in Steele’s memos.

In the weeks after the election, the details in Steele’s dispatches remained secret, and I spent weeks trying to determine if any of the allegations could be substantiated. The claim that Cohen met secretly with Russians seemed to be one of the tales that might be confirmable. I took a stab at that. While pursuing that angle, I called Cohen. He insisted that there had been no trip to Prague and that he had met with no Russians during the campaign.

This week I reviewed my notes from that phone call. Here’s the direct quote from Cohen: “I haven’t been to Prague in 14 years. I was in Prague for one afternoon 14 years ago.”

What’s notable? In that conversation, Cohen acknowledged he had once been to Prague—but a long time ago. In his recent denial, Cohen, whose home and office were raided last week by FBI agents seeking records related to the Stormy Daniels case and other matters (including taxi medallions), asserted he had “never” been to Prague. How significant is this discrepancy? There is no telling. But it is an inconsistency. Cohen’s lead lawyer could not be reached for a comment.

This discrepancy mirrors one that recently emerged related to Trump’s 2013 visit to Moscow, when he presided over the Miss Universe pageant he then co-owned. That was the infamous trip mentioned in the Steele memos as the time when Trump cavorted with prostitutes in his hotel room. (Steele also reported that Trump engaged in other lurid activity during other trips to Russia.)

In his interview with ABC News’ George Stephanopoulos, former FBI Director James Comey recounted a phone call he had with Trump, after BuzzFeed posted the Steele memos in mid-January 2017. As Comey put it:

[Trump] launched into an explanation as to how I should know that wasn’t true and that he remembered now, from talking to friends who had been with him, that he’d never stayed overnight at the hotel, he’d just changed clothes there and went to the Miss Universe pageant.

And in a memo Comey wrote following a January 28, 2017, meeting with Trump—which was leaked on Thursday night—Comey noted that Trump had told him he had “spoken to people who had been on the Miss Universe trip with him and they had reminded him that he didn’t stay over night in Russia for that.”

Yet Trump did indeed stay in the hotel that night. In our new book, Russian Roulette: The Inside Story of Putin’s War on America and the Election of Donald Trump, Michael Isikoff and I detail Trump’s itinerary in Moscow during that visit, which lasted two days and one night. In fact, Trump’s longtime bodyguard Keith Schiller has told congressional investigators that he escorted Trump to his hotel room that particular night. There is no doubt Trump was in the hotel that evening. Yet he told Comey he wasn’t? That seems odd. Especially for the man who says he has “one of the great memories of all time.”

Back to Michael Cohen and Prague. This week, Cohen dropped the defamation lawsuits he had filed against Fusion GPS and BuzzFeed that stemmed from the publication of the Steele memos and the Prague allegation. It may well be that Cohen was up to his neck in legal woes and could not, as one of his attorneys claimed, manage these lawsuits. But Cohen’s abandonment of this action means that the legal teams for Fusion GPS and BuzzFeed will no longer have the opportunity in the discovery phase to demand information from Cohen regarding his whereabouts and contacts during the 2016 campaign. For now, Cohen’s denial still rests solely on his say-so.

None of this means that either the Prague or prostitutes allegation is true. But why can’t Cohen and Trump get their respective stories straight?