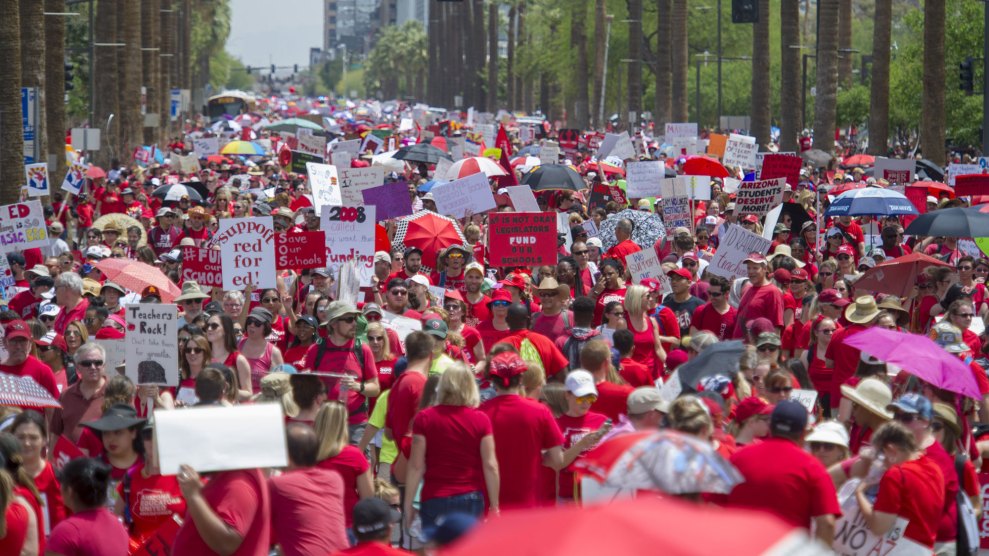 Some 50,000 educators marched on the Arizona State Capitol on Thursday.Jeff Brown/ZUMA Wire

This week, thousands of teachers in Arizona and Colorado descended on statehouses to demand better pay and school funding. It appears many Americans agree with them—and support their efforts to shut down schools to make their case to lawmakers.

An Associated Press-NORC Center for Public Affairs Research poll released earlier this week found that 78 percent of Americans thought teachers needed a raise. That was a substantial increase from a 2010 poll by the AP and Stanford University, in which 57 percent said teachers were underpaid. Fifty-two percent of Americans in the AP-NORC poll supported teachers walking out to call for higher pay, and half noted they would welcome a higher tax bill to make it happen. A quarter of respondents didn’t approve of leaving classrooms to protest.

In a new poll out this week, 52 percent of Americans said they supported teachers walking out to call for higher pay.

A separate NPR/Ipsos poll, released Thursday, found that only 26 percent of Americans believed that teachers were paid fairly.

Over the last decade, Americans have largely agreed that teachers deserve pay increases. Support waned after the recession took hold but has risen since its lowest point in 2011.

But that support does have its limits. In a 2017 poll on a wide range of education issues by the policy journal Education Next, 61 percent of those surveyed agreed that teachers deserved higher pay—when respondents did not know how much teachers made.

When Americans were told about how much teachers make on average in their state, however, support for a pay increase was just 36 percent in 2017, down from 54 percent in 2008.

Since the 2009-10 school year, teachers’ salaries dipped an average of 5 percent, to $58,950 in 2016-2017, according to the National Center for Education Statistics. Those polled by Education Next also underestimated how much teachers made in their state. In 2016, the journal found that people guessed that teachers earned an average of 30 percent less than they actually made.

During the last decade, 29 states reduced state funding of schools below 2008 levels, according to the Center on Budget and Policy Priorities. Years of cuts to classroom funding, along with subpar pay, have inspired the latest revolt among teachers, beginning in West Virginia, where a nine-day strike resulted in a $2,000 pay raise. The fervor spread to red states like Oklahoma, Kentucky, and Arizona, eventually turning to Colorado, where teachers rallied on Friday for a second day outside the state capitol.