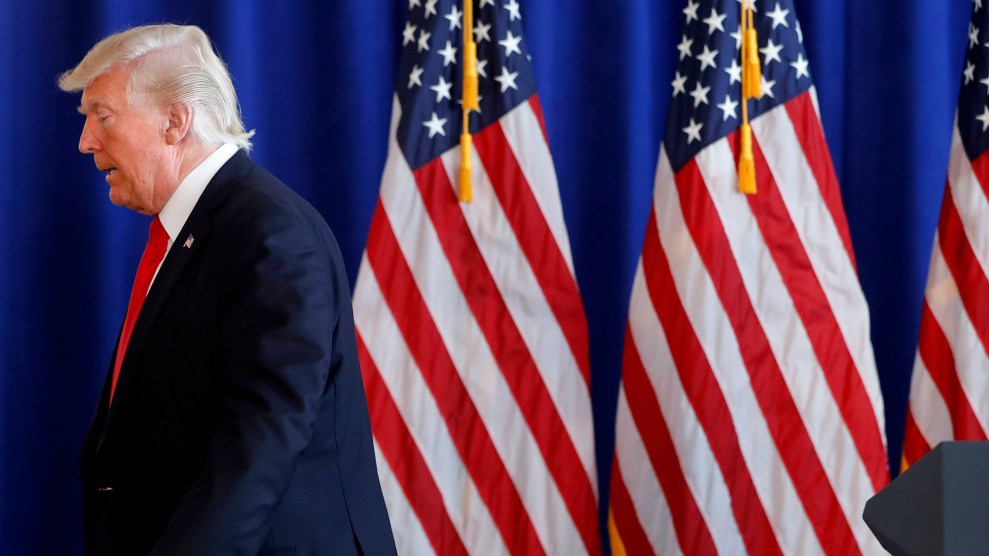 On Thursday evening—like a thunderclap—the new book by James Comey, the Trump-fired former FBI chief, slammed into the political-media world. Comey’s A Higher Loyalty is due out on Tuesday, but stories about what’s in the book, as was inevitable, began detonating several days ahead of the publication date.

The New York Times posted its review of the work— “It’s Very Persuasive”—leading with Comey’s comparison of Donald Trump to the dishonest mob bosses the former FBI chief used to pursue, those wise-guys who demanded blind loyalty from their minions. The New York Post pushed that angle too, with a headline blaring, “Comey Says Trump Reminded Him of Gambino Mob Boss.” And the Washington Post focused on Trump’s fixation on the infamous Steele dossier—not its allegations of covert Trump-Russia ties, but specifically its unproven “golden showers” allegation. As Comey tells it, Trump repeatedly insisted to the G-man that this tale was untrue. (In our new book, Russian Roulette: The Inside Story of Putin’s War on America and the Election of Donald Trump, Michael Isikoff and I report that Christopher Steele, the former British intelligence officer who compiled that document, now believes the odds the pee party actually transpired are about “fifty-fifty.”)

Comey’s observations of Trump are valuable—comments on the size of Trump’s hands aside—and the recounting of his interactions with the president, which offer a few more details than Comey provided when he testified before Congress last year, ought to disturb anyone who cares about having a reasonable and stable commander in chief. Comey clearly knows how to sell this significant and troubling story. But of the material that has become available, one portion of the book stands out as far more worrisome than Trump’s obsession with the allegations of urinating prostitutes or his Soprano-like behavior.

This is the passage from the Washington Post relating what happened when Comey, then-Director of National Intelligence James Clapper, then-CIA chief John Brennan, and NSA head Mike Rogers briefed Trump in early January 2017 on the intelligence community’s report that concluded the Russians had mounted an information warfare attack on the 2016 election to help Trump become president. Midway through its article on the Comey book, the Post describes his account:

Trump was accompanied at the Trump Tower session by his national security team, as well as by political aides Reince Priebus and Sean Spicer, who were slated to become White House chief of staff and press secretary respectively. Trump asked only one question, Comey writes: “You found there was no impact on the result, right?”

James R. Clapper Jr., then the director of national intelligence, replied that the intelligence community did no such analysis.

Comey recalls being struck that neither Trump nor his advisers asked about the future Russian threat, nor how the United States might prepare to meet it. Rather, he writes, they focused on “how they could spin what we’d just told them.”

With Clapper and then-CIA Director John O. Brennan—both Obama appointees—still in the room, Priebus and other Trump aides strategized for political advantage, Comey writes. The Trump team decided they would emphasize that Russian interference had no impact on the vote—which, Clapper reminded them, the intelligence community had not determined.

Trump was two weeks away from being sworn in as president. He was just informed that the US national security establishment had confirmed its assessment that Vladimir Putin had covertly attacked American democracy and that this assault was designed to affect the results of the election. And Trump responded with no interest in any aspect of this unprecedented intervention other than its political implications—for him. In front of the leaders of the intelligence community—two of whom would continue to work for him—Trump did not even bother to feign concern. He went straight to what mattered most: What does this mean for me?

The president-to-be was engaging in a profound dereliction of duty. His No. 1 job is to defend the United States from foreign attack. And he didn’t give a damn. He was kicking off his presidency with an action—or inaction—that could be seen as a betrayal of the nation he was supposed to serve.

As Isikoff and I point out, after this meeting, Trump tweeted, “Intelligence stated very strongly there was absolutely no evidence that hacking affected the election results.” This was not true. The report did not say that. And Clapper, according to Comey, had explicitly spelled this out for Trump. Still, Trump lied—and Priebus and Spicer went along.

This anecdote from Comey’s book certainly raises a question of Trump’s fitness for office. It also presents what might be an uncomfortable question for Comey, Brennan, Clapper, and Rogers. They saw an incoming president demonstrate he was unable—or unwilling—to meet his primary obligation. They did not share this with the rest of us. (Rogers still works for Trump, but he is expected to retire soon.)

Comey’s portrayal of Trump as vain, erratic, ignorant, and dismissive of the important norms of government and law enforcement is not a surprise. Nor is Trump’s private reaction to the intelligence community’s report on the Russian attack. But this particular moment reveals a fundamental flaw of his presidency: Trump does not—and perhaps cannot—truly care about the well-being of the country he leads. It’s good that Comey is telling the public now. But there are others who have witnessed this sort of Trump conduct—Admiral Rogers?—who ought to let their fellow Americans know. That would truly be serving a higher loyalty.