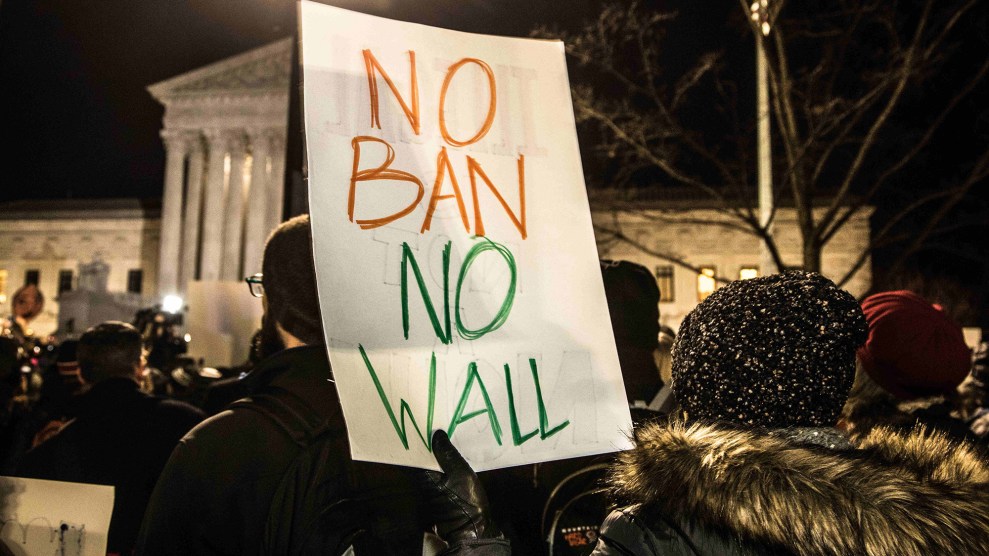 Protesters rally against President Trump's travel ban outside the Supreme Court on January 30, 2017, three days after Trump announced the ban.Jeff Malet/Newscom via ZUMA

For the first time in Donald Trump’s presidency, the Supreme Court will begin hearing a case Wednesday in which it will decide the fate of one of his key policies. At stake is his travel ban, which bars entry into the United States by people from several Muslim-majority countries.

The court has already allowed the ban to go into effect while it hears the case. That means that thousands of American citizens and residents, foreign students, and their loved ones are feeling the effect of the ban, which applies to most nationals of Iran, Libya, North Korea, Somalia, Syria, and Yemen, as well as certain Venezuelan officials. We asked some of those people what they want the Supreme Court to know as it hears oral arguments on Wednesday. Here are some of the stories they shared.

Amin lives in Missouri, but his father was denied a visa to visit him:

I really miss my dad and I know he misses me a lot, but he tries to stay strong. But I cannot give him even a tiny bit of hope for being with him again after all I see the Trump presidency has brought to immigrants life, especially Iranian families.

The worst part is I really fear something happen to my dad and…and I won’t forgive myself for coming to U.S. for studying, working and following my dreams…

IF the travel ban stays in effect, I have planned to move to another country or even back home.. I have to leave everything I have worked for here.. but at the same tie I do not want to live in a country where the government bans me from visiting my family.

Rosita Oloumi, 34, has lived in the United States since she was 16:

I would want [the justices] to know that not everyone is a bad person! We have families on the other side of the world and this ban has separated us. I feel like my country has betrayed me!…

In August of 2016 I got engaged to the love of my life. I met him when I had to travel back to Iran after 13 years being away and attend my father’s funeral…

He had his interview in August 2017. We have been waiting for the response from the embassy ever since. We were told that the administrative processing will take 4-6 months. Obviously that is not the case. It’s been 8 months already.

I am 4.5 months pregnant with a baby girl who might not even see his father as a result of this travel ban!

Fatemeh Karimi lives in the United States with her children:

I applied for my husband’s visa on January 2015 and he had his interview on January 2017. Now it’s been more than one year we are waiting for his visa.

My husband has missed almost 3 year of our children’s lives and now we all have stressful times here. It’s very hard. We were born in Iran but even though we were not living there we are banned!

This also is effecting my sons education and grades and my daughter hasn’t had as much positivity in her than she did before. My son sees the therapist but it doesn’t help because the only thing he needs is his father, he’s just a little kid. This is the time he needs his father the most.

The only thing we want is to be like other families. Together. Not separated.

This US citizen, whose wife is stuck abroad, asked not to be named:

I am a US Citizen and I applied for my wife who is still in Iran, about 8 months ago. Her application is still in processing, however USCIS approved the application and I am waiting to hear from NVC now. So the timing is right if travel ban is removed! If they don’t take any action and let it be in place still I am not sure what will happen with our lives…

I am living here for seven years, studying and working and paying my taxes, however because of my nationality now, I am worried that they won’t issue an immigration visa for my lovely wife.