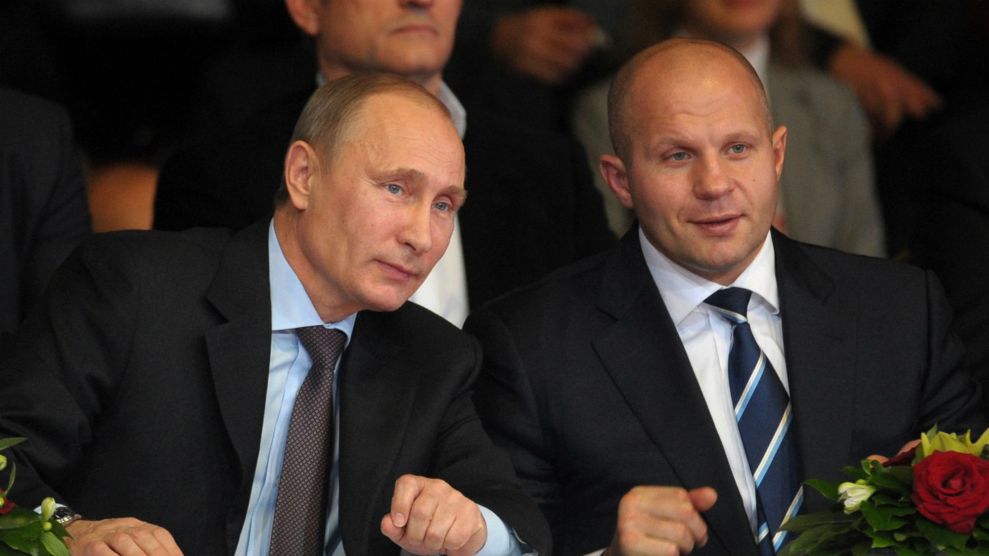 FBI agents questioned a Putin-friendly Russian MMA fighter this week while he was visiting the US for a major fight. Fedor Emelianenko arrived in Chicago on Tuesday and within hours, agents showed up at his hotel room.

“The FBI came to the hotel looking to talk to Fedor,” Emelianenko’s manager Jerry Millen told the Associated Press, “and they were very nice, came in to speak with Fedor for a few minutes, spoke to me, very cool guys, and that’s all I can really say about it. Again, the FBI did come to the hotel, they found us, knocked on the door.”

There is no evidence that Emelianenko is himself in trouble with the FBI. But the MMA fighter’s longstanding connections to Russian President Vladimir Putin—who has attended Emelianenko’s fights—as well as his ties to President Donald Trump and Trump’s longtime attorney Michael Cohen, have raised questions about what, exactly, the FBI wanted to talk to the fighter about. Sources told the Telegraph of London that the FBI has been back and forth to Emelianenko’s hotel room over the last few days. FBI agents also attended his fight at Bellator’s heavyweight World Grand Prix tournament on Saturday.

Emelianenko has also been involved in Russian politics—a member of Putin’s United Russia party, he was elected in 2010 to serve as a deputy in the regional parliament of Belgorod. In 2012, he campaigned for Putin during the president’s reelection bid, and later joined Russia’s Presidential Council on Physical Culture and Sports, taking the spot of former Russian President Dmitri Medvedev on the government-sponsored committee. Emalienenko has also been photographed with Putin himself.

At the same time, Emelianenko has a web of connections to Trump world. In 2008, he signed a contract with Affliction Entertainment, an MMA company in which Trump had an ownership stake. Trump had partnered with Affliction at the encouragement of his longtime lawyer, Michael Cohen, who happens to be an MMA fan. Affliction had started as a martial-arts themed clothing company, but it wanted to expand into sponsoring fights, and Trump seemed like the guy to bring them publicity. Trump’s plan was for Affliction to host pay-per-view MMA fights in the US, as well as a 15-episode reality TV show starring Emelianenko himself, called “Fighting Fedor.” The show “will be spectacular,” Trump said in a 2008 Affliction press release announcing his partnership. “It will be taped in St. Petersburg, Russia…I’m going to be there.” Cohen became Affliction’s chief operating officer.

None of this lasted very long: After two events, both headlined by Emelianenko, Affliction shut down for financial reasons. Trump’s MMA reality show never happened.

But now Affliction’s various former participants—from Trump to Cohen, and now Emelianenko—are all under the FBI’s microscope. Two weeks ago, FBI agents raided Cohen’s offices, home, and hotel, collecting materials as part of a criminal investigation into the attorney. That probe has ties to the special counsel investigation into Russian interference in the US election, and possible collusion between the Kremlin and the Trump campaign.