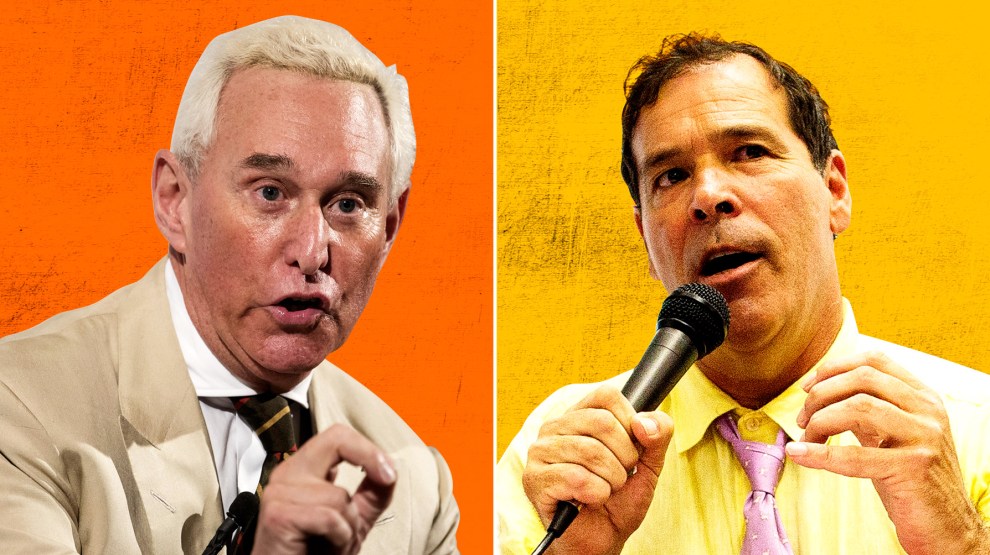 Special Counsel Robert Mueller appears to be increasingly interested in the actions of Roger Stone. Investigators have questioned former associates of Stone, the self-proclaimed political dirty trickster who has been a longtime official and unofficial adviser to Donald Trump. On Meet the Press on Sunday, Stone—who during the 2016 campaign boasted he was in direct contact with Julian Assange of Wikileaks and then later denied that he had been—said that he is “prepared” for the possibility that he will be indicted for “some extraneous crime pertaining to my business” that Mueller’s team “may seek to conjure up.”

And perhaps the pressure is getting to Stone. Randy Credico, a New York radio host and comedian, provided Mother Jones with a series of vitriolic emails he says Stone sent him in recent weeks. Reached via text message, Stone acknowledged communicating with Credico but told Mother Jones that “most” of the emails were “probably fabricated.” Stone declined to share the complete correspondence between him and Credico.

Credico and Stone were once pals. When Stone started denying after the election that he had communicated directly with Assange, Stone claimed that Credico had served as something of a go-between for him with Assange during the campaign. For his part, Credico, who has publicly championed Assange, has said that he played no such role. Not surprisingly, the former friends have experienced a falling out.

“I am so ready. Let’s get it on. Prepare to die cock sucker,” Stone messaged Credico on April 9. Stone was responding to a message from Credico that indicated Credico would release information contradicting Stone’s claims about the 2016 election and that “all will come out.” Credico tells Mother Jones that he considered this email from Stone a threat.

In a text message to Mother Jones, Stone did not dispute sending this particular message to Credico. But he maintains he was not making a threat and contends that Credico is citing his words out of context. “He told me he had terminal prostate cancer,” Stone writes. “It was sent in response to that. We talked about it too. He was depressed about it. Or he was lying?” (In other messages provided by Credico, Stone appears to have said he was not threatening him.)

Credico says he does not have prostate cancer and did not have such a discussion with Stone. Referring to the “prepare to die” message from Stone, Credico insists, “That was a threat.”

Credico sent Mother Jones screenshots of messages he said were from Stone, many of which appear to have been prompted by media appearances and news reports in which Credico disputed Stone’s claim that Credico acted as an intermediary between Stone and WikiLeaks in 2016. During the presidential campaign, Stone appeared to possess advance knowledge of WikiLeaks’ release of Democratic emails stolen by Russian hackers. (Stone also privately communicated with Guccifer 2.0, an account suspected of having served as a front for Russian intelligence, and defended Guccifer 2.0 in public.)

Following the election, Stone changed his story to say he only had a general knowledge of WikiLeaks’ plans based on news reports and what he had learned about Assange from Credico. Yet Credico says that he had no information about Wikileaks or the stolen emails to share with Stone. Credico also claims that around the time Stone was interviewed by the House Intelligence Committee in September, Stone told him to “just go along with” his story.

Last November, the committee subpoenaed Credico, but he asserted his Fifth Amendment rights and was excused from testifying. This year, though, Credico began speaking out. In interviews with the Daily Beast, Mother Jones, and Yahoo News and for David Corn and Michael Isikoff’s Russian Roulette, Credico openly contradicted Stone’s claims that he was a source of information on Assange for Stone. These reports drew Stone’s ire.

“You are a rat,” reads one undated missive that Credico says Stone sent him. “A stoolie. You backstab your friends-run your mouth my lawyers are dying to Rip you to shreds[.]” In other messages over the past few months, Stone called Credico a liar and threatened to sue him.

An early April email to Credico—attributed to Stone—reads, “Everything I have said publicly about You has been complimentary – yet you continue to act like Nunberg,” a reference to Sam Nunberg, the former Trump aide and Stone protégé with whom Stone has had a falling out. Another email to Credico says, “Give Mueller my regards.” Another declares: “Everyone says u are wearing a wire for Mueller.” Credico tells Mother Jones he has not been contacted by Mueller.

On April 28, Credico attended the White House House Correspondents Dinner as a guest of Yahoo News’ Isikoff. At the event—from which he was ejected—Credico met Rep. Adam Schiff (D-Calif.), the top Democrat on the House Intelligence Committee. The men chatted and, according to Credico, Schiff invited him to meet informally as part of the Russia investigation Democrats on the committee are continuing. The Republican majority ended the committee’s official Russia inquiry earlier this year.

Credico met on Wednesday with four Democratic committee staffers. Credico says he went to the meeting to convey an invitation from Assange, who remains confined in the Ecuadorian embassy in London. According to Credico, he told the staffers that he had communicated with Assange through a Wikileaks associate, whose name he would not share with Mother Jones, and that Assange was willing to meet with Schiff.

WikiLeaks did not respond to questions from Mother Jones about this alleged offer. Schiff spokesman Patrick Boland confirmed the staffers met with Credico. He declined to comment on what was discussed. “Randy Credico offered to meet with the Congressman’s staff to share information as part of our ongoing investigation,” Boland said in an email. “We look forward to his continued cooperation.”

Boland suggested that Schiff is unlikely to meet with Assange soon. “Our committee would be willing to interview Julian Assange when he is in United States custody, not before, he said.