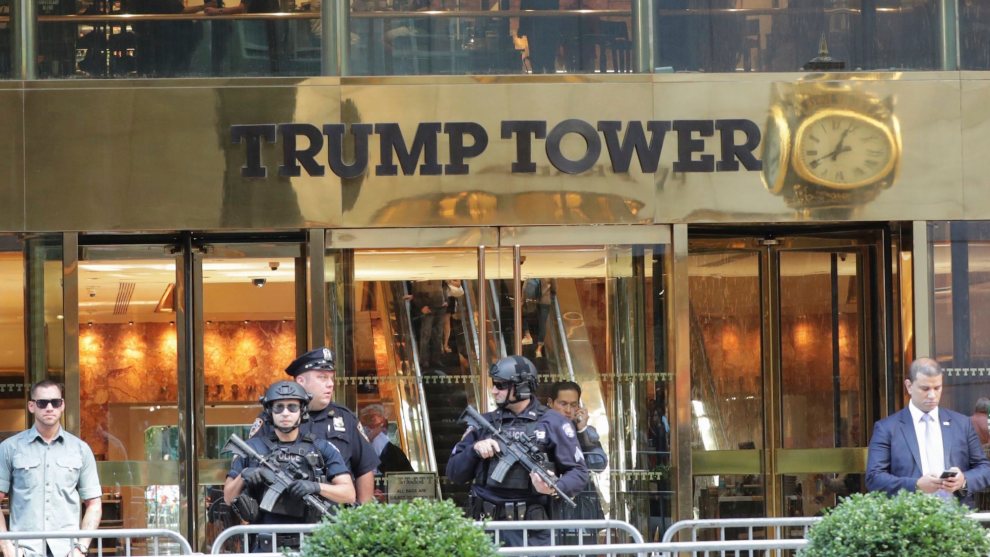 Last July, the New York Times was the first to reveal Donald Trump Jr.’s much-scrutinized Trump Tower meeting with a Kremlin emissary who had promised damaging information about Hillary Clinton. Today, the Times followed up with another blockbuster report revealing that Trump Jr. took a second Trump Tower meeting before the election—this time, with an Israeli social media specialist, an emissary of two Arab crown princes, and Erik Prince, the founder of Blackwater, a private military company now called Academi.

“The meetings are the first indication that countries other than Russia may have offered assistance to the Trump campaign in the months before the presidential election.”

The purpose of the meeting was to offer help for Donald Trump’s presidential campaign, and it took place three months before the election, the Times reports. The Israeli social media specialist, Joel Zamel, had drawn up a “multimillion-dollar proposal for a social media manipulation effort,” while the emissary, George Nader, told Trump Jr. that the crown princes of Saudi Arabia and the United Arab Emirates were “eager to help” Donald Trump win the 2016 election.

Here are more details from the full report:

It is unclear whether such a proposal was executed, and the details of who commissioned it remain in dispute. But Donald Trump Jr. responded approvingly, according to a person with knowledge of the meeting, and after those initial offers of help, Mr. Nader was quickly embraced as a close ally by Trump campaign advisers—meeting frequently with Jared Kushner, Mr. Trump’s son-in-law, and Michael T. Flynn, who became the president’s first national security adviser. At the time, Mr. Nader was also promoting a secret plan to use private contractors to destabilize Iran, the regional nemesis of Saudi Arabia and the Emirates.

The meetings, which have not been reported previously, are the first indication that countries other than Russia may have offered assistance to the Trump campaign in the months before the presidential election. The interactions are a focus of the investigation by Robert S. Mueller III, the special counsel, who was originally tasked with examining possible Trump campaign coordination with Russia in the election.

It is illegal for foreign governments or individuals to be involved in American elections, and it is unclear what—if any—direct assistance Saudi Arabia and the Emirates may have provided. But two people familiar with the meetings said that Trump campaign officials did not appear bothered by the idea of cooperation with foreigners.