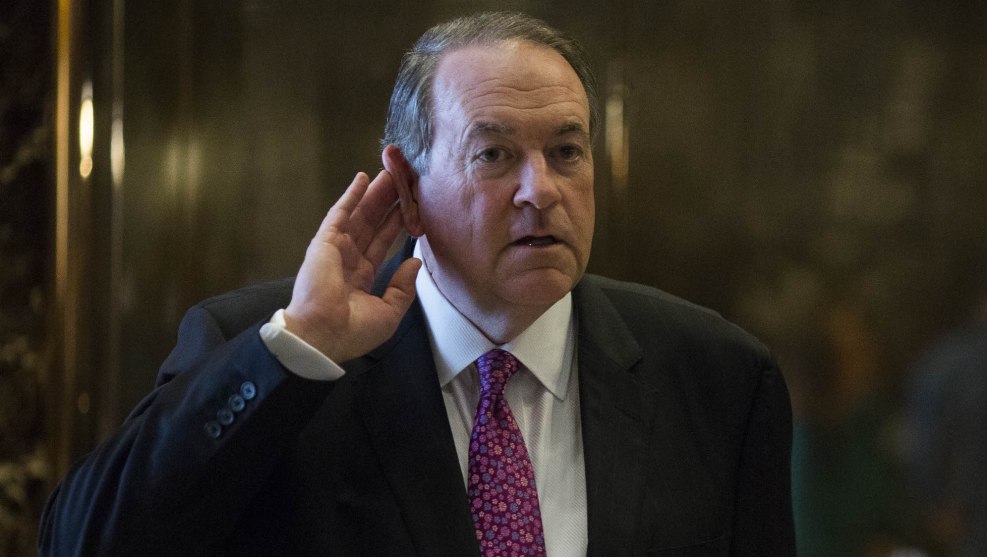 In January, Mike Huckabee, the former Arkansas governor and one-time presidential candidate, took a trip to Qatar. Upon his return, Huckabee, whose daughter is White House Press Secretary Sarah Huckabee Sanders, praised the small Persian Gulf state in a tweet.

Just back from a few days in surprisingly beautiful, modern, and hospitable Doha, Qatar I will appear on @FoxNews at 9am ET and @Varneyco on @FoxBusiness at 8:45 to bring Fancy Nancy some "crumbs" to sprinkle on her caviar topped @FiveGuys burger.

Huckabee did not note that he had recently been paid $50,000 by a lobbyist for Qatar.

On Friday, Joseph Allaham, a former owner of kosher steakhouses in New York, retroactively registered with the Justice Department as a foreign agent for Qatar. In the paperwork disclosing his activity on behalf of the Qatari government, Allaham noted that he had paid $50,000 on November 23, 2017, to Blue Diamond Horizons, a Florida corporation run by Huckabee. The filing stated that Huckabee received this money as an “honorarium for visit.” And the $50,000 payment, according to the disclosure, came from the $1.45 million Qatar had paid Allaham in part for “community engagement” to benefit Qatar—actions that included making “charitable contributions and arranging meetings in the United States and visits to Qatar.”

So this is how it worked, according to Allaham’s disclosure report: Huckabee was paid to visit Qatar, and for its $50,000, the Qatari government got a positive tweet out of him. Huckabee did not respond to requests for comment.

Huckabee traveled to Doha, Qatar’s capital, at the same time as both Alan Dershowitz, the celebrity lawyer who has become a confidant of President Donald Trump, and Mort Klein, the longtime president of the Zionist Organization of America, as Mother Jones reported last week. The Dershowitz and Klein trips were among at least 20 visits to Doha taken by politically prominent Americans that were organized by Allaham and Nick Muzin, a former aide to Sen. Ted Cruz (R-Texas) and the Trump transition team, who until this month worked as a lobbyist for Qatar. The junkets were paid for by Qatar and designed to help the Qatari government woo American Jewish leaders, many of whom had previously criticized Qatar for being a threat to Israel. Huckabee describes himself as an ardent supporter of Israel.

The Qatari outreach to pro-Israel Americans was part of a broader effort by Qatar to improve its standing in Washington as it has been locked in a bitter rivalry with Saudi Arabia and the United Arab Emirates. Those two countries, along with several others, imposed a blockade on Qatar last year, a move that initially received support from Trump.

Dershowitz and Klein told Mother Jones that their trips included personal audiences with Qatari Emir Tamim bin Hamad al-Thani and other senior officials. The Qataris “said they wanted to explain their situation,” Dershowitz said. “They are a small country between Saudi Arabia on one hand, a regional power, and Iran on the other. And they had to survive.”

The payment to Huckabee was legal—and also an example of how Qatar, the richest country in the world on a per-capita basis due to its natural gas reserves, uses its deep pockets to bolster traditional diplomacy. One lobbyist involved in Qatar’s outreach to pro-Israel Americans said the effort aimed to influence people with access to Trump or his top aides in the hope they would convey support for Qatar to the president, or at least temper their criticism of the country.

Huckabee was an expensive get for Qatar—his trip cost more than the $50,000 payment he received from Allaham. Dr. Joseph Frager, a gastroenterologist and pro-Israel activist who supported Huckabee’s 2016 presidential bid, also registered as a foreign agent for Qatar last month, and he reported he was paid $50,000 by Muzin’s firm for Qatar-related work. Frager told Mother Jones the fee was in part for helping facilitate Huckabee’s January visit.

In his filing, Allaham reported that his work for Qatar included making a $100,000 donation in October to Our Soldiers Speak, a New York-based charity that organizes trips for officers in the Israeli Defense Forces and the Israeli National Police to speak on college campuses in other countries. That was a major contribution to the group, which reported receiving less than $600,000 in revenue in 2015. The contribution came on October 30, a few days before the group’s annual gala, where Secretary of State Mike Pompeo, at the time the CIA director, was the keynote speaker. As part of his Qatar project, Allaham also made two $50,000 contributions to Klein’s group, the Zionist Organization of America. The first was on November 2, shortly before the group’s annual dinner. The second came January 23, a few weeks after Klein visited Doha. In an interview last week, Klein said he would not discuss contributions to his organization. However, he said he would never alter any positions in exchange for funding. “There was no quid pro quo,” he said.

According to Allaham, he made each of these donations using the $1.45 million the Qataris paid him in a lump sum. Lobbyists are typically paid monthly.

Allaham and Muzin’s lobbying for Qatar has recently come under new scrutiny, due to a lawsuit filed by Elliott Broidy, a major Republican donor. Broidy alleges that his reputation was trashed after Qatar, with help from Muzin, hired hackers to gain access to his email and leaked damaging messages. (Broidy has been in the news due to his ties to a businessman whose alleged influence-peddling activities are reportedly under examination by special counsel Robert Mueller. Broidy also made headlines for using Michael Cohen, Trump’s longtime fixer, to pay $1.6 million to a former Playmate with whom he had an extramarital affair.) Allaham was named by Broidy’s legal team as a witness in this case, and this month he was hit with a subpoena from Broidy’s lawyers requiring him to turn over records of his communications related to Qatar. Allaham is being deposed Tuesday by Broidy’s attorneys, according to two sources familiar with the case.

In May, Allaham’s attorney told Mother Jones that Allaham was not required to register as a foreign lobbyist “because the activity he is engaged in was exempt from the definition of registered activity.” (Under the Foreign Agents Registration Act, any American who is paid to advance the interests of a foreign government, entity, or person must register with the Justice Department as a foreign agent.) But just after a judge compelled him on June 6 to comply with the subpoena in the Broidy case, Allaham announced he would file retroactively as a lobbyist for Qatar, but that he was no longer working for the Arab state. On that day, Muzin also said he was dropping his $300,000-a-month lobbying deal with Qatar. Like other foreign agents for Qatar, Muzin said he reported to Qatar’s US Embassy. In the filing Allaham subsequently submitted to the Justice Department, he said he had reported directly to the Qatari emir.