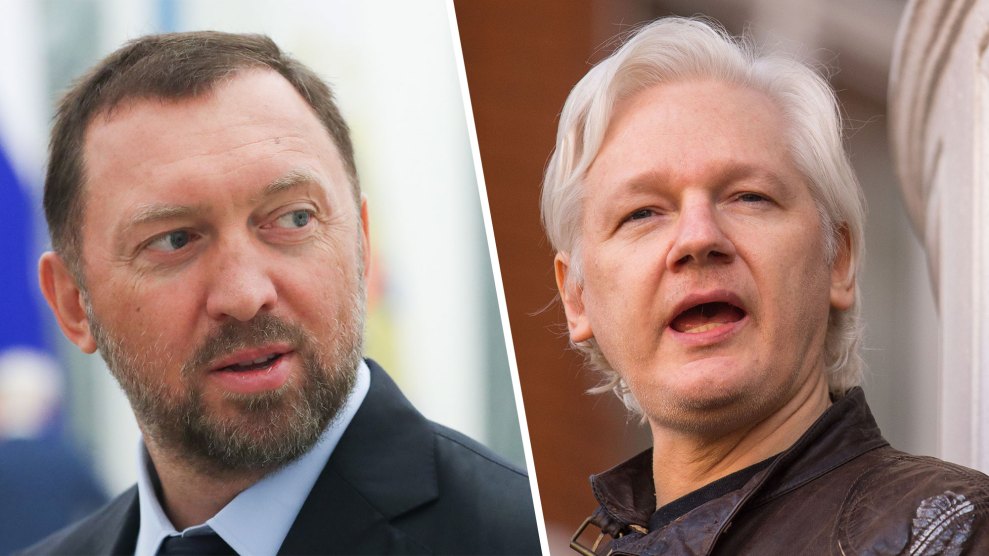 In February, Fox News published a series of text messages from early 2017 between Sen. Mark Warner (D-Va.) and a Washington-based attorney named Adam Waldman, a registered lobbyist for Russian oligarch Oleg Deripaska. Fox News and other conservative media focused on messages in which Waldman had unsuccessfully sought to put Warner, the top Democrat on the Senate Intelligence Committee, in touch with Christopher Steele, the former British intelligence officer who wrote a series of memos during the 2016 campaign reporting alleged ties between Donald Trump and Russia. The point seemed to be to bolster the claim of Trump defenders that the Trump-Russia scandal was somehow concocted by Democratic partisans.

But these takes overlooked something much more striking. The texts revealed that Waldman, whose clients include the actor Johnny Depp and other celebrities, had initially approached Warner on behalf of Julian Assange, the founder of WikiLeaks, attempting on a pro-bono basis to help Assange cut a deal with the Justice Department. This outreach came while Waldman was representing Deripaska, an aluminum magnate, on a $40,000-a-month contract and while Deripaska himself was seeking an immunity deal from Congress in exchange for his testimony related to the Russia scandal.

In other words, Waldman was working simultaneously for Assange and Deripaska, a confidant of Russian President Vladimir Putin. And in 2010, Waldman had reported working as a lobbyist directly for the Russian foreign ministry. With Waldman’s ties to Deripaska and Russia, the texts raised the intriguing question of whether his efforts on behalf of Assange were connected to the interests of Deripaska or the Kremlin.

On Wednesday, the Guardian reported that Waldman’s work for Assange was more extensive than previously known. Last year, according to visitor logs obtained by the newspaper, Waldman visited Assange nine times in the Ecuadorian Embassy in London, where Assange has been confined since 2012, when he sought refuge there to dodge an extradition order.

Many of Waldman’s visits to Assange seem related to his effort to broker a deal between Assange and the US government, under which Assange would be allowed safe passage to the United States if he discussed past and future WikiLeaks releases with senior US officials.

US intelligence agencies and the Senate Intelligence Committee have concluded that Russian intelligence was behind the hack of Democratic emails that were passed on to WikiLeaks for release as part of Russia’s effort to help Trump during the 2016 election. Deripaska was sanctioned this spring by the Treasury Department in retaliation for the 2016 attack. He is a former business partner of Paul Manafort, Trump’s 2016 campaign chairman, who is currently jailed for witness tampering in connection with his upcoming trial for tax evasion, money laundering, and conspiracy.

In his 2017 texts to Warner, Waldman indicated that Assange hoped to use a stolen archive of documents detailing CIA hacking operations as leverage to win concessions from the United States. “Just want to underscore my opinion and the reason I got involved – this guy is going to do something catastrophic for the dems, Obama, CIA and national security,” Waldman wrote Warner on February 16, 2017. “I hope someone will consider getting him to the US to ameliorate the damage.” Waldman was hinting at a deal: If the US government played ball with Assange, then maybe this material would stay secret.

But there was no deal. And on March 7, WikiLeaks released the CIA material. After these documents were posted, Waldman, while seeking a meeting with Warner, warned the senator that WikiLeaks had additional material: “There is more to come.” Waldman’s warnings apparently worried Warner. He immediately informed the FBI of the messages, according to a Senate aide.

Throughout the spring of 2017, Warner continued to text with Waldman. In the course of this correspondence, the senator asked Waldman for information from Deripaska about Manafort. In one message, Waldman suggested Warner could meet with Deripaska if he traveled to London. (No such meeting ever occurred.)

In an April 10, 2017, text, Waldman noted that he had convinced Assange “to make serious and important concession and am discussing those w DOJ.” Waldman also said Deripaska was “willing to testify to congress but interested in state of play w Manafort.”

Eventually, Waldman struck out in his efforts to arrange deals for Assange and Deripaska. There was no deal for Assange, and lawmakers rejected Deripaska’s request for immunity in exchange for his testimony. (Derispaska has echoed Trump’s claim that the Russia investigation is baseless. In a March 8 op-ed in the Daily Caller, he contended that the probe was a “Wag the Dog” manipulation by the American “Deep State.”)

Warner later turned over his texts with Waldman to the intelligence committee. In November, Waldman was interviewed by committee staff. The panel’s questions related mostly to Deripaska, a congressional aide said.

So was there any connection between Waldman’s efforts for Assange and his business relationship with Deripaska? Waldman did not respond to multiple requests for comment.