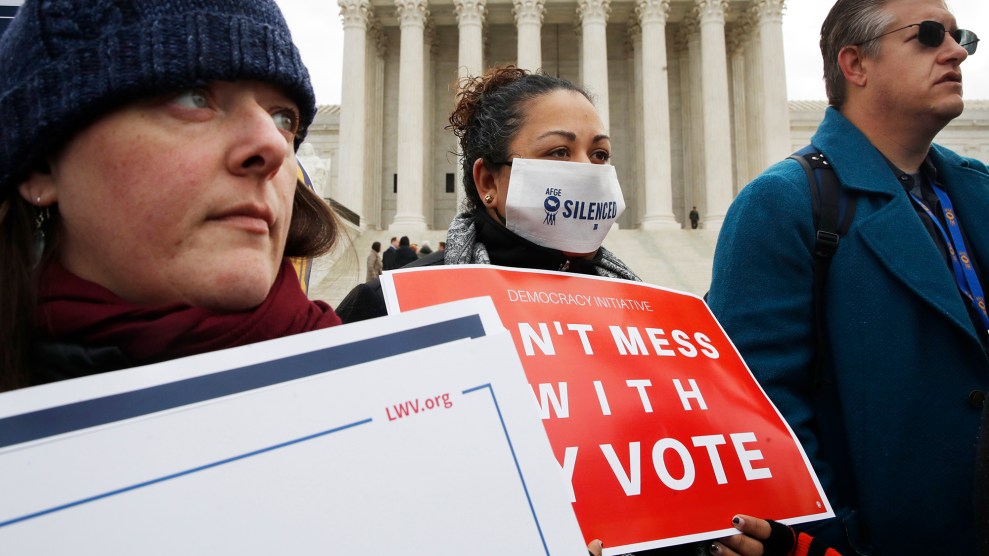 Protestors outside of the Supreme Court rally in opposition to Ohio's voter roll purges.Jacquelyn Martin/AP

In 1965, Congress passed the Voting Rights Act to end the disenfranchisement of black voters in the Jim Crow South. The law was remarkably successful in dismantling barriers to the ballot box like literacy tests and poll taxes, but a few decades later, Congress recognized that more still needed to be done to boost political participation. In the 1988 presidential election, for example, barely half of eligible African American voters cast a ballot.

In response to persistently low voter turnout, Congress passed the National Voter Registration Act of 1993 to allow voters to register at Department of Motor Vehicles offices and other public agencies. President Bill Clinton called it “a sign of a new vibrancy in our democracy.” The “motor voter” law had an immediate impact: More than 30 million people registered or updated their registrations through the NVRA in its first year in effect. Roughly 16 million people per year have used it to register ever since.

One of the key features of the law was to protect voters from being wrongly removed from the voter rolls. The NVRA stipulated that someone could not be removed from the rolls “by reason of the person’s failure to vote.” But in a 5-4 decision Monday, the Supreme Court ruled that the state of Ohio could remove infrequent voters from the rolls, severely weakening the power of the NVRA and opening the door to wider voter purging.

Ohio purged more than 2 million registered voters between 2011 and 2016, more than any other state. Black voters in the state’s largest counties were twice as likely as white voters to be removed from the rolls. In a dissent to Monday’s ruling, Justice Sonia Sotomayor wrote that the court’s opinion “entirely ignores the history of voter suppression against which the NVRA was enacted and upholds a program that appears to further the very disenfranchisement of minority and low-income voters that Congress set out to eradicate.”

In video with @dale_e_ho for @aclu & @moveon I explained how SCOTUS opinion upholding voter purging in Ohio will open door to voters of color & low-income people wrongly being kicked off voter rolls & unable to vote pic.twitter.com/z84K2zUjlP

The case is part of a broader strategy by Republicans to weaken one of the country’s most important voting rights laws and make it easier to remove voters from the rolls. After the Supreme Court gutted the Voting Rights Act in 2013, ruling that states with a long history of discrimination no longer needed to approve their voting changes with the federal government, Republicans took aim at the NVRA.

This case isn’t the only way Republicans are trying to weaken the motor voter law. In Kansas, Secretary of State Kris Kobach—the country’s most prominent advocate for tighter voting restrictions and the former vice chair of President Donald Trump’s now-defunct Election Integrity Commission—championed a law that required people to show a birth certificate, passport, or naturalization papers to register to vote. That goes against the NVRA’s requirement that states allow people to register to vote easily at motor vehicles offices and other public agencies. The proof-of-citizenship law ultimately blocked one in seven eligible voters who attempted to register. A federal court temporarily blocked the law before the 2016 election, but after the election, Kobach drafted federal legislation to amend the NVRA to allow states to require proof of citizenship for registration, which he shared with Trump.

In June 2017, the Justice Department sent a letter to 44 states informing them it was reviewing their voter list maintenance procedures and asking how they planned to “remove the names of ineligible voters.” At the time, Vanita Gupta, who headed the Justice Department’s Civil Rights Division under President Barack Obama and is now president of the Leadership Conference on Civil and Human Rights, said that if Ohio won at the Supreme Court, that would “certainly embolden” the department and GOP-controlled states to undertake aggressive voter purges.