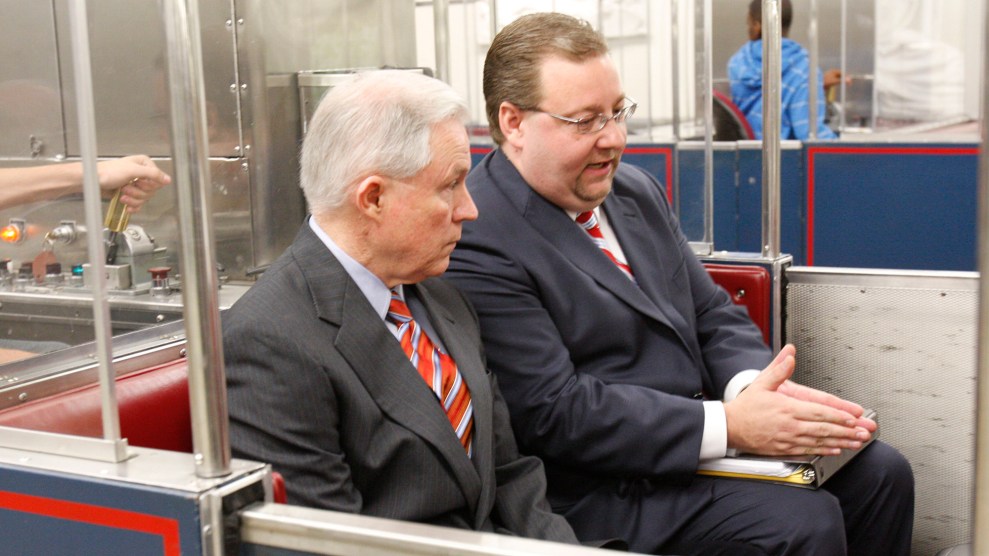 The Senate confirmed a top Justice Department official on Wednesday who could help oversee the Trump-Russia investigation, despite his own troubling connections to Russia and his close ties to Attorney General Jeff Sessions.

Brian Benczkowski, a former Senate aide to Sessions, was confirmed on a 51-48 vote to lead the Justice Department’s Criminal Division, a job that could give him sway over special counsel Robert Mueller’s investigation. Several Senate Democrats have argued that Benczkowski should be disqualified due to previous work on behalf of a Russian bank with close ties to Russian President Vladimir Putin and a general lack of experience in criminal law.

“I don’t think in the history of the department there’s ever been anybody so ill-prepared” for this job, says Sen. Sheldon Whitehouse (D-R.I.), who has been one of the chief agitators against Benczkowski’s nomination. He says Benczkowski has “barely set foot in a courtroom.” (Benczkowski has never prosecuted a case.) He continues, “So if the obvious reason for why you’d want him there is not evident, then you have to look for less obvious reasons.”

Whitehouse posits several ways in which Benczkowski could undermine the Mueller investigation from his perch atop the Criminal Division, which would give him insight into the investigation. He could share information about the probe with Sessions, who recused himself from the investigation, or with President Donald Trump’s legal team. He could also slow down the investigation by delaying or denying any requests that come to his desk.

And Whitehouse notes that the Trump administration is surely aware that the president could replace Rod Rosenstein with Benczkowski, since anyone confirmed by the Senate to any post can be temporarily appointed to other posts that typically require Senate confirmation. That would transfer oversight of the Russia investigation to him. “There are lots of nefarious explanations for why this guy at this time gets installed in a position with a window into the Mueller investigation,” he says.

Other Democrats have voiced similar warnings. “The Benczkowski vote could mark a pivotal moment in the Russia investigation,” Sen. Dick Durbin (D-Ill.) tweeted Tuesday, as the vote on the nomination approached. “The warning signs are clear.”

On Monday, Durbin, Whitehouse, and the other Democrats on the Senate Judiciary Committee sent a letter to Trump asking him to withdraw Benczkowski’s nomination, arguing that Benczkowski cannot “credibly oversee the Division’s involvement in Special Counsel Mueller’s investigation.”

Will Senate Republicans simply rubber stamp this nomination? The Benczkowski vote could mark a pivotal moment in the Russia investigation. The warning signs are clear. Read my letter here: pic.twitter.com/I3FbK26ZMJ

For the past year, Democrats have raised these concerns about Benczkowski. He has virtually no criminal law experience and yet would lead the Justice Department’s criminal prosecutors. He was an aide to Sessions in the Senate and remains close to the attorney general. He led the Justice Department’s transition after Trump’s election and then asked Sessions for a job as a US attorney. In the meantime, he returned to private practice. In March 2017, Benczkowski took on Alfa Bank as a client. The bank, which is run by oligarchs with close ties to Putin, was part of a strange episode in the Trump-Russia scandal.

In late October 2016, Slate reported that the bank and the Trump Organization had a high volume of connections between their computer servers. But the FBI had investigated the link and concluded there could be an innocuous explanation, according to the New York Times. Alfa Bank hired an outside firm, Mandiant, to study the data transmissions. With the limited data the firm was given, it found no evidence of substantive contact between the bank and the Trump Organization.

But in the first months of 2017, Alfa Bank’s server again logged suspicious traffic potentially connected to the Trump Organization. This time, Alfa Bank turned to Kirkland & Ellis, where Benczkowski took the case. His job was to oversee a second investigation of the new server connections, which was conducted by a different forensics firm, and to bring the results to the FBI and Justice Department. Benczkowski was in the midst of this effort when he was nominated to lead the Criminal Division. At his confirmation hearing, Benczkowski promised to recuse himself from any matters relating to Alfa Bank for two years, the minimum required, but not from the ongoing Russia investigation. The report overseen by Kirkland & Ellis again found no evidence of contact between Alfa Bank and the Trump Organization.

Democrats have argued that Benczkowski’s work for Alfa Bank, when he knew he might soon receive a Justice Department post, exhibited poor judgement. “The Senate does not know if Alfa Bank has been, or still is, under federal criminal investigation, nor do we know the full story behind Alfa Bank’s suspicious contacts with the Trump Organization during the 2016 campaign,” the Democrats on the Judiciary Committee stated in their letter to Trump this week.

As part of his work on behalf of Alfa Bank, Benczkowski got involved with another piece of the Russia investigation: the Steele dossier, which compiled uncorroborated reports of Russian interference in the US elections. Many Republicans in Congress have attempted to discredit the dossier and its author, ex-British spy Christopher Steele. The dossier, much of which was published by BuzzFeed in January, contained allegations about Alfa Bank:

According to the dossier, Putin has leverage over the bank’s owners and receives informal advice about the United States from two of the three oligarchs who run the bank, Mikhail Fridman and Petr Aven. In his role as counsel for Alfa Bank, Benczkowski reviewed this portion of the dossier after it was published and advised Fridman and Aven on the viability of a defamation suit against BuzzFeed.

Ultimately, the bank’s three owners did sue BuzzFeed, though Benczkowski’s firm did not represent them.

During his confirmation hearing, Benczkowski agreed to recuse himself from matters related to Alfa Bank for two years, the minimum required, but declined to promise a recusal from the Russia investigation. Sessions had recused himself from the Russia investigation in March 2017 due to his ties to the Trump campaign. Democrats fear that Benczkowski could end up as a backchannel to share information about the investigation with the attorney general—a fear that a Justice Department spokeswoman has dismissed as “insulting and absurd.” It’s likely that the position of Criminal Division chief would provide him a window into the Russia probe as well as the investigations by Mueller and the US attorney’s office investigation into Trump’s longtime lawyer, Michael Cohen:

Justice Department official Stephen Boyd wrote to Whitehouse in December that special counsel regulations require Mueller to “‘consult with appropriate offices within the Department for guidance’” on the rules and procedures of the department. That suggests that Benczkowski could have significant insight into the investigation, and even some control over aspects of it.

There is no special setup to wall off Mueller’s work from other components of the Justice Department, Boyd wrote. Mueller may have to seek approval for some actions through the same channels that a US attorney would, including from the criminal division. “[T]o ensure that information about the investigation is not disseminated more broadly than necessary, the Criminal Division has identified specific points of contact for the [special counsel’s office] with respect to various subject matters,” Boyd wrote. If confirmed, Benczkowski would have “no supervisory role with respect to the Special Counsel,” Boyd stated, but added, “it is possible that the [special counsel’s office] will seek approvals from the Criminal Division as required by statute, regulation, or policy.”

This story has been updated to reflect Benczkowski’s confirmation and Whitehouse’s comments.