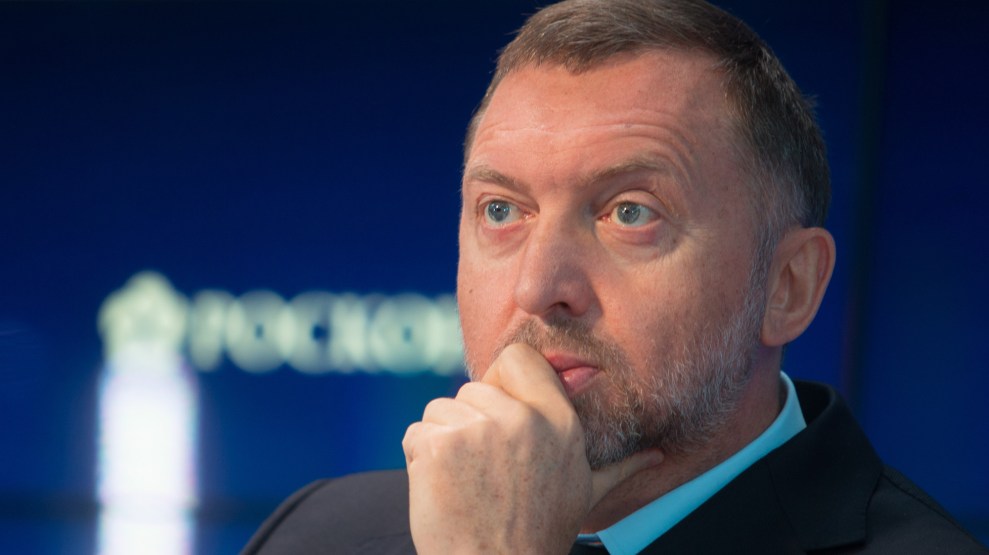 The Trump Administration may lift sanctions on a major Russian company founded by one of Vladimir Putin’s top allies.

Treasury Secretary Steve Mnunchin told reporters during G-20 meeting of Finance Ministers last week, that the department may remove sanctions on Rusal, an international aluminum company that controls an estimated 6 percent of the global market that has long been controlled by Oleg Deripaska. Deripaska is a Putin confidant who has been implicated in suspected coordination between Moscow and Trump’s 2016 presidential campaign, but he has repeatedly denied involvement. As Reuters reported, the department is mulling the move in the wake of a sharp increase in aluminum prices that followed Trump‘s imposition of a 10 percent tariff on aluminum imports.

“The objective was to impact the oligarchs, not to impact the hardworking people of Rusal as a result of the sanctions,” Mnunchin told CNN, which reported the comments on Friday.

In April, Treasury’s Office of Foreign Assets Control imposed sanctions on Deripaska and Rusal, along with 24 other Russians, in a delayed action aimed at punishing Russia for interfering the 2016 election. Under the sanctions, the US assets of the individuals and firms listed are frozen, and American citizens are barred from doing business with them. Deripaska was specifically singled out for “having acted or purported to act for, or on behalf of, directly or indirectly, a senior official of the Government of the Russian Federation.”

Rusal has reorganized to reduce Deripaska’s role in a bid to escape the sanctions. Deripaska and a team of his top managers stepped down from Rusal’s board of directors in May. Mnuchin says the department is evaluating whether those changes are sufficient to drop sanctions. “If we can find an acceptable solution, that is our objective,” Mnuchin said.

Rusal’s bid to escape the sanctions has received support in Washington from the lobbying firm Mercury Public Affairs, which represents a British Lord who sits on Rusal’s board. Mercury has faced scrutiny from Special Counsel Robert Mueller because of its work with former Trump Campaign Chairman Paul Manafort on behalf of Viktor Yanukovych, the former pro-Russian President of Ukraine. Manafort has been charged with illegal lobbying on behalf of Yanukovych. Mercury, which has not faced charges in the case, has since expanded its foreign lobbying practice. It has enlisted foreign ambassadors to the United States to press the State Department and Treasury to drop sanctions on Rusal, The Daily Beast reported.

Treasury was mulling the potential move on Friday, even as Trump presided over the first National Security Council meeting during his presidency that explicitly focused on combating foreign interference in US elections.

The White House, continuing damage control efforts after President Trump’s widely criticized conduct during a July 16 news conference with Putin in Helsinki, Finland, played up the Friday meeting. “The President has made it clear that his administration will not tolerate foreign interference in our elections from any nation state or other malicious actors,” the White House said in a statement.

But NBC News reported on Friday that the Trump administration lacks any coherent strategy—formal or informal—to combat those foreign efforts to influence election results.

“President Trump’s inability to acknowledge that the Russians interfered in 2016 and that they will be back in 2018 is really hampering the government’s response to this threat,” Virginia Sen. Mark Warner (D-Va.) the top Democrat on the Senate Intelligence Committee, said Friday.  “We just don’t have a whole-of-government strategy for dealing with this problem, and it leaves us incredibly vulnerable to continued interference by the Russians or, for that matter, any other adversary who might try to steal their playbook.”