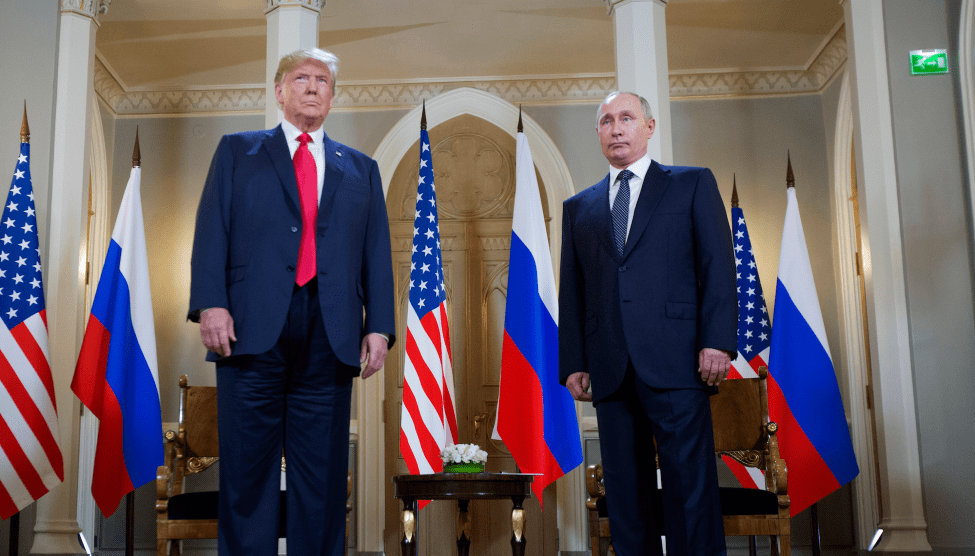 “I think the probe is a disaster for our country,” he told reporters on Monday. “I think it’s kept us apart. It’s kept us separated. There was no collusion at all. Everybody knows it.”

“Do you hold Russia at all accountable for anything in particular?”

When asked directly about issues that Trump might fault Putin for, the president said that both sides were to blame for the breakdown in relations between Russia and the US. “I do feel like we’ve both made some mistakes,” Trump said.

Both Trump and Putin said the US president raised the issue of Russian election interference during the meeting. But when AP reporter Jon Lemire asked whether Trump would denounce Russia’s meddling efforts, the president suggested that he accepted Putin’s denial that Russia had intervened in the 2016 presidential race.

“I don’t see any reason why it would be Russia,” Trump said, a statement that contradicts the assessment of the US intelligence community, as well as the special counsel’s indictment on Friday of 12 Russian intelligence officials for their alleged role in hacking various Democratic targets during the 2016 campaign.

Instead of confronting Putin, Trump quickly defended the legitimacy of his election, raised his electoral college results, and praised his campaign as “brilliant.”

“I beat Hillary Clinton easily,” Trump said. “It’s a sham there could even be a little bit of cloud over that.”

Trump’s meeting with Putin marks the end of his chaotic visit to Europe, during which he repeatedly attacked America’s European allies and referred to the European Union as a “foe.” As the press conference concluded, US lawmakers, former intelligence officials, and members of the media swiftly condemned Trump’s remarks.

Donald Trump’s press conference performance in Helsinki rises to & exceeds the threshold of “high crimes & misdemeanors.” It was nothing short of treasonous. Not only were Trump’s comments imbecilic, he is wholly in the pocket of Putin. Republican Patriots: Where are you???

I never thought I would see the day when our American President would stand on the stage with the Russian President and place blame on the United States for Russian aggression. This is shameful.

President Trump just attacked our intelligence agencies and law enforcement for doing their jobs while standing next to a dictator who intervened in our election to help elect Trump.

Putin will take this as a green light to interfere in 2018, and it is. Cowardly and shameful.

This may be the worst moment in US foreign policy history that does not directly involve a war or another act of violence.

Missed opportunity by President Trump to firmly hold Russia accountable for 2016 meddling and deliver a strong warning regarding future elections.

This answer by President Trump will be seen by Russia as a sign of weakness and create far more problems than it solves. (1/3)

It's difficult to overstate the damage done by Donald Trump’s shocking & disgraceful show of weakness on the world stage. The strong global alliances & global belief in American leadership that he has taken just days to tear down over the last wk will take generations to rebuild https://t.co/r83JopDkPK

Everyone is numb and in shock. We can’t believe what we just witnessed, but for me it’s this simple: The President of the United States openly colluded with Putin to undermine our democracy.