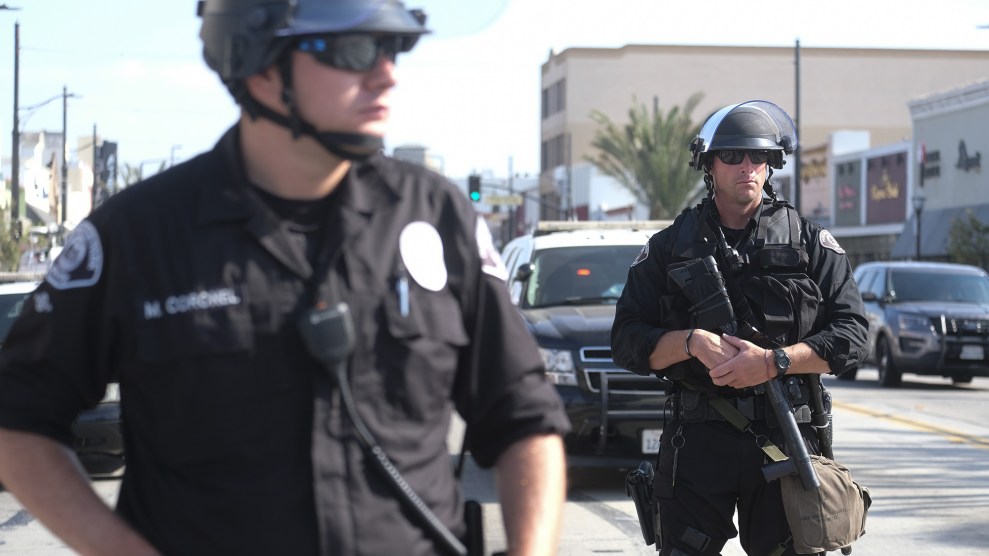 A California bill that would radically change the standard for the use of deadly force by police officers got past a key hurdle on Thursday, as the state Senate Appropriations Committee voted unanimously to send it along to the full Senate for debate.

Assembly Bill 931, the Police Accountability and Community Protection Act,  would allow officers to use lethal force only when “necessary” to “prevent imminent and serious bodily injury or death” to an officer or bystander, and when there are no “reasonable” nonlethal alternatives—a Taser, for example. The bill would also mandate that cops attempt to de-escalate potentially volatile situations using “time, distance, communications, and available resources” whenever it is “safe and reasonable” to do so. And it would bar police from using lethal force when a subject is a threat only to himself.

“If we want to reduce police shootings, we need to change the rules on when police can shoot.”

AB931, which is opposed by most of the state’s law enforcement unions, was introduced by Assembly members Shirley Weber of San Diego and Kevin McCarty of Sacramento in the wake of the fatal shooting earlier this year of unarmed 22-year-old Stephon Clark by Sacramento police officers. In California, according to a Washington Post database, police have shot and killed more than 60 people so far this year—162 were fatally shot last year, although only half had a gun.

“We’ve seen too many people killed by police and too many cases where police used deadly force in a way that doesn’t match the community’s values,” says Peter Birbing, director of police practices for the ACLU of Southern California. The ACLU’s three branches in the state have launched a social-media campaign encouraging residents to contact their representatives and encourage them to vote yes on AB931. “If we want to reduce police shootings, we need to change the rules on when police can shoot,” Birbing says. “That’s what this bill does.”

It would be about time, supporters say. The state law governing police use of force hasn’t been amended since it was enacted—in 1872. It’s the oldest untouched use-of-force law in the nation, according to Amnesty International, which supports AB931.

Under the existing law, California cops may use any kind of force they believe is “reasonable” to “effect [an] arrest, to prevent escape or to overcome resistance” of a suspect, regardless of the crime, whether the person is armed, or whether they pose a threat to the officer or another person. That force standard is looser than the one set by the 1989 Supreme Court ruling in Graham v. Connor, which said an officer’s use of lethal force must be “objectively reasonable”—meaning any officer in the same situation might have made a similar call. The court also laid out tests to determine the reasonableness of an officer’s actions, including whether a suspect poses an immediate threat to the officer or others, the severity of the alleged crime, whether the suspect is resisting, and whether he is a flight risk or attempting to escape police custody.

Consequently, police use of force in California has been governed by a combination of the Garner ruling and precedents set by state courts. Yet many California police departments still train their officers according to the 1872 law, supporters say, and AB931 provides some much-needed clarity.

“Officers are going to be left with the ramifications of, ‘Well what happens because I didn’t pursue?'”

The CPOA met earlier this year with co-author Weber and the ACLU to share its concerns. If police are less proactive and someone gets hurt as a result, Rundle says, “officers are going to be left with the ramifications of, ‘Well what happens because I didn’t pursue?'”

But Birbing notes that police departments elsewhere, including in Seattle and Chicago, adopted similar use-of-force policies under the guidance of the Department of Justice. The Seattle Police Department, for instance, adopted its version following a 2012 court order. The change brought about a 60 percent drop in serious incidents of force by the deployment, a federal review determined, with no increase in officer injuries or crime. The California bill is also in line with standards recommended by respected groups such as the Police Executive Research Forum and the International Association of Chiefs of Police.

The CPOA is also concerned that AB931 challenges the Supreme Court standard, Rundle says. But Birbing counters that it is perfectly appropriate for states to set the bar higher than the court did in its Garner ruling—they just can’t lower it. “California’s law is as broad an authorization of use of force as is constitutionally permissible, and we don’t have to have that,” he says.

The bill will still need to get through both legislative houses by August 31 to be passed during this session. That could be tough, as the state Legislature has historically been hesitant to rattle police groups.

On Monday, some 250 people representing more than 20 community groups throughout California showed up at the state Capitol to encourage senators to move the bill forward. Among them were Black Lives Matter Sacramento, which spearheaded local protests in the wake of the Clark shooting, and the Anti-Police Terror Project. Webber spoke at the demonstration, and supporters performed a die-in and read off the names of all the people killed by police in California last year.

“We need to emphasize, especially in these nonthreatening situations, de-escalation as a primary tactic, and not just lethal force because you have the legal authority and ability to do so,” says Eddie Carmona, political director at PICO California, a coalition of progressive churches and faith groups that led organizing for Monday’s action in Sacramento. “It’s worked in other places. We just need to do it in California.”

This article has been updated to reflect the passage of the bill from committee.