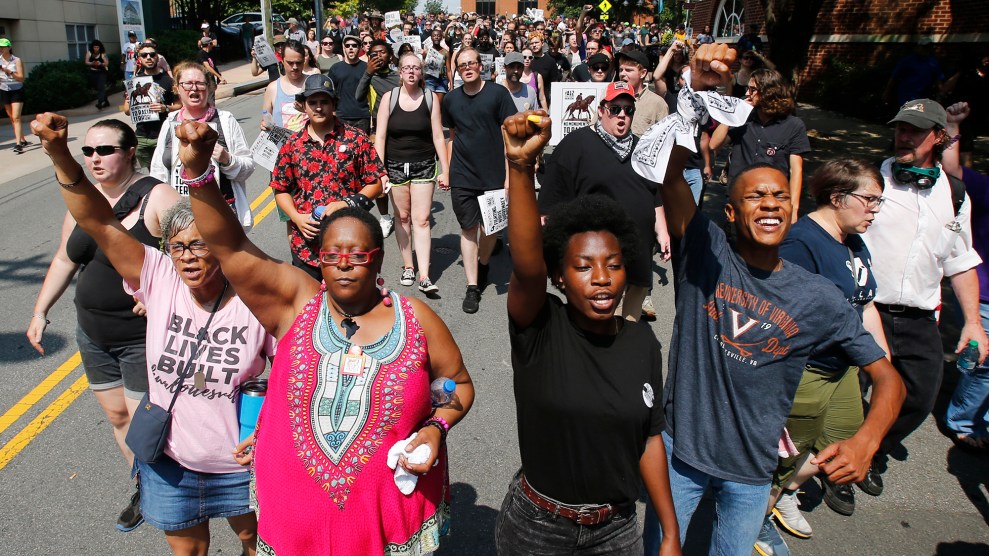 Demonstrators against racism march Sunday along city streets as they mark the anniversary of last year's Unite the Right rally in Charlottesville. Steve Helber/AP

It’s been one year since tiki-torch-carrying neo-Nazis and Ku Klux Klan members descended upon Charlottesville, Virginia, and an alleged white nationalist barreled his car into a 32-year-old anti-racist protester named Heather Heyer, taking her life and injuring 19 others. To mark the anniversary, white nationalists are preparing to gather today in Washington, DC, for their second annual Unite the Right rally. But in the capital and in Charlottesville, they are expected to be significantly outnumbered by counterdemonstrators protesting racial hatred.

On Sunday morning in Charlottesville, hundreds of people came out to honor the life of Heyer, gathering at the intersection where she was killed a year ago. One powerful video shows an African American woman leading a procession down the street, singing a variation of a freedom song that was used during the civil rights movement.

“Let us in” at the intersection of 4th and Water where the car attack happened a year ago. pic.twitter.com/MQcNRUFU7M

Heyer’s mother, Susan Bro, joined the gathering holding flowers for her daughter’s memorial. She broke into tears as she addressed the group of supporters. “This was not all about Heather,” Bro said, recalling those who were injured in the car attack and others who are killed around the country during acts of racial violence that are not documented in headlines. “The world went crazy when Heather lost her life, and that’s not fair because so many mothers lose their children every day, and we have to fix that. We have to fix that. I don’t want other mothers to be in my spot.”

Susan Bro is on Fourth Street, where her daughter Heather Heyer was murdered one year ago. She brought purple flowers for Heather, and two roses for the state officers who died that day. pic.twitter.com/G3edwtuf8W

The protests began Saturday when students demonstrated at the University of Virginia, where the white nationalists first marched last year.

The white nationalist rally last year was organized in response to theCharlottesville city council’s decision to remove a Confederate monument from a park. President Donald Trump addressed the Charlottesville clash at the time by saying there were “very fine people on both sides” of the protest, and he condemned the “egregious display of hatred, bigotry, and violence on many sides.” This year, white nationalists are holding another Unite the Right event, which they have billed as a white civil rights rally, in front of the White House at Lafayette Park in Washington, DC. There was a heavy police presence assembled to escort organizer Jason Kessler to the event.

Foggy Bottom Metro, waiting to escort Kessler & co to his rally in front of the White House pic.twitter.com/NCDMAa6XVx

Kessler said he expects 100 to 400 people to attend the rally, a showing that will likely be dwarfed by the thousands of counterdemonstrators who have filled Washington’s streets in the hours leading up to it. Many counterdemonstrators gathered in the city’s Freedom Plaza bearing signs condemning white supremacy.

The “Unite the Right” marchers have arrived at Lafayette Square. There appear to be roughly two dozen of them. The hundreds-strong crowd of counter demonstrators booed loudly as Jason Kessler, holding an American flag, led the group around. pic.twitter.com/ZEdIOU2dXm

This is the “Unite the Right”’rally crowd. All of them. pic.twitter.com/flgi9jqZQ2

Sup Twitter fam: I’ll be covering the faith-based response/counter-protests to the white supremacist Unite the Right 2 in DC rally today.

Starting with the United To Love rally on the National Mall, primarily organized by United Methodists.

Lots of hymns at the moment. pic.twitter.com/6MrxDZIApu

🎶No, I won’t be afraid. No, I won’t be a afraid of no KKK. Just as long as you stand, stand by me.🎶#UnitedAgainstHate #AllOutDC pic.twitter.com/AJS18CvgQS