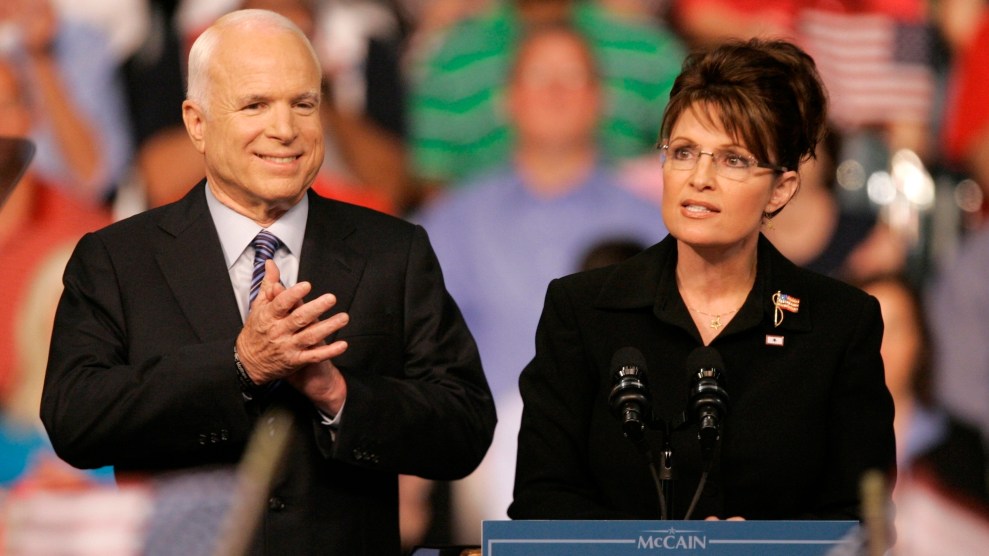 Poor John McCain can’t die in peace without a last few digs from his former vice presidential running mate, Sarah Palin. While most of the political world was fondly remembering Sen. McCain and issuing sympathetic statements to his family, Palin took the opportunity to make his death all about her. She went on the click-happy British website DailyMailTV to vent—again—about her frustrations with his staff and advisors during and after the 2008 presidential campaign.

She told the DailyMailTV that McCain lived in the Washington, DC, “bubble” and was out of touch with real people and, as a result, overly reliant on his advisers to tell him “what America really wanted.” She went on to say:

I don’t think inherently he necessarily was really connected, so he did rely on people telling him – in polls – telling him and…he went from there.

I think that’s unfortunate because he had some strange people around him and..disloyal people, and you know, I don’t say that as like hate speech or griping about it, it’s just a fact they were just some not nice people.

The people to whom Palin is referring likely included Nicolle Wallace, who served as senior adviser to the McCain-Palin campaign in 2008 and is now a political commentator for MSNBC. Palin has been jousting with Wallace ever since she was assigned to help transform Palin from small-state governor to vice presidential candidate. Palin has been blaming Wallace for years for her disastrous performance on the campaign trail. Wallace, meanwhile, wrote a novel featuring a mentally ill female vice presidential candidate that many believed was a thinly veiled dig at Palin.

In her DailyMailTV interview, Palin did attempt to highlight some of McCain’s positive attributes, namely his military service. She told the DailyMailTV, “I’ll remember the good times, that’s for darn sure. And I won’t rehash the strange times that happened after the campaign that some of his people orchestrated.”