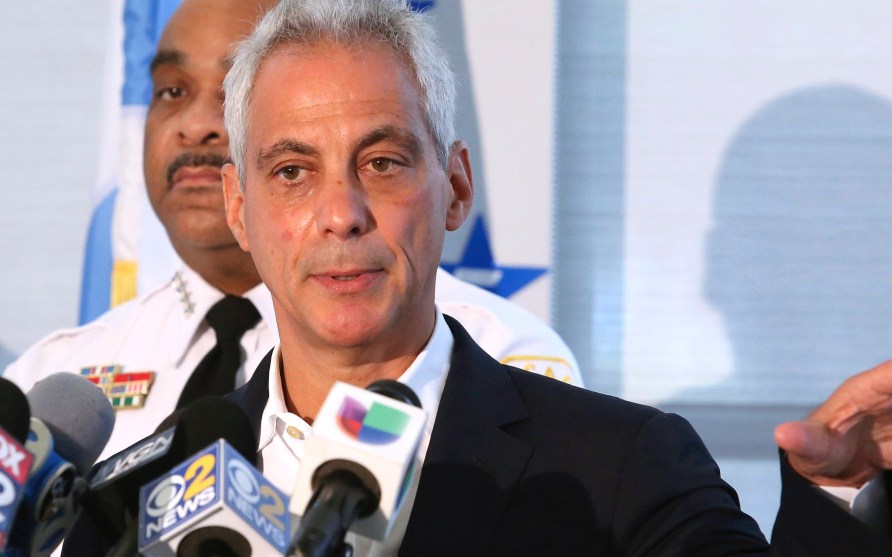 Rahm Emanuel at a press conference in August 2018.Teresa Crawford/AP

Chicago mayor Rahm Emanuel will not seek reelection to a third term in office, he said at a press conference this morning. The announcement came as a surprise, as the embattled mayor has raised millions of dollars over the past year for his re-election bid. It also opened up the race for a crowded field of a dozen candidates, including likely frontrunner Lori Lightfoot, a black, openly gay former prosecutor whose platform includes police accountability and criminal justice reform.

“For the last seven and a half years I’ve given my all every day and left everything on the field. This commitment has required significant sacrifice all around,” Emanuel said. “We have more to do and from now until then, we will do everything in our power to get it done and walk out the door hopefully leaving Chicago and Chicagoans in a better place.”

That announcement heralds an end to a tumultuous two terms for Emanuel, a former congressman and White House chief of staff under President Barack Obama. In 2011, Emanuel won his first mayoral term in a landslide, but he was forced into a run-off in 2015. More recently, he faced calls for his resignation due to his handling of the fatal shooting of a teenager, Laquan McDonald, by Chicago police—activists accused him of trying to cover-up the shooting for fear it would hurt his re-election chances. (Jury selection begins Wednesday in the murder trial of the officer who shot McDonald.) Emanuel also faced local outcry over his 2013 decision to close 50 schools in predominately black and brown neighborhoods.

After the news broke that Emanuel was stepping back, Obama released a statement celebrating his old friend’s achievements. “As a mayor, congressman, and my first White House chief of staff, Rahm Emanuel has been a tireless and brilliant public servant,” Obama said. “Whatever he chooses to do next, I know he’ll continue to make a positive difference just as he has throughout his career in public service.”

NEW: Former Pres. Barack Obama on Rahm Emanuel: “Chicago is better and stronger for his leadership, and I was a better President for his wise counsel at a particularly perilous time for our country.” https://t.co/B8q4fo76wZ pic.twitter.com/DZUgHpA4pp

Local activists, meanwhile, celebrated Emanuel’s announcement on Twitter—superstar Chance the Rapper among them.

I just did a praise dance before yoga class!!!!! Rahm Emanuel is NOT running for a third term.

Congrats to all the organizers who helped this happen, and to oppressed communities who suffered under this admin. Let's celebrate today, and remember that the fight for our freedom continues tomorrow.#RahmQuits #ByeRahm #NoCopAcademyhttps://t.co/c76nmYbuzx

Shoutout to all the grassroots orgs like @AssataDaughters @BYP_100 and many others that pushed for accountabily and resignation from Rahm. His announcement to not run however, is not Justice for Laquan McDonald, only convicting muderer Jason Van Dyke can bring that.

The voting takes place in February 2019.