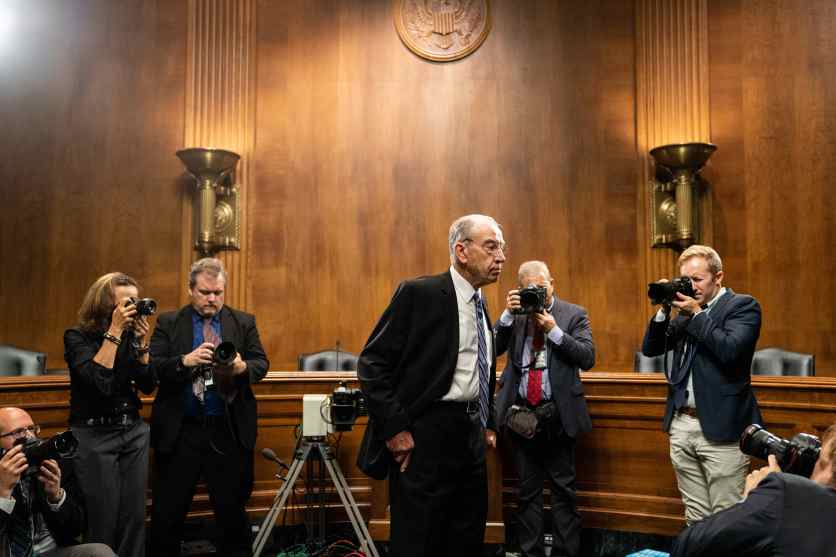 As Ford waited to begin her testimony, Grassley continued by using his opening remarks to shoot down calls from Ford and Democrats for the FBI to investigate her sexual assault allegations against Supreme Court nominee Brett Kavanaugh. He then interrupted Feinstein during her opening remarks when she accurately pointed out Grassley had failed to properly introduce Ford.

“I was going to introduce her, but if you want to introduce her, I’d be glad to have you do that,” Grassley shot back, visibly irritated. “But I want you to know I didn’t forget to do that because I would do that just as she was about to speak.”

The interruption was the first of many by Grassley during Ford’s testimony, in which the chairman appeared defensive and highly combative toward his Democratic colleagues. At one point, he angrily rejected Sen. Dick Durbin’s (D-Ill.) charges that Republicans on the committee were blocking an FBI investigation into Ford’s allegations, pointing the finger at Democrats for what he repeatedly claimed was a mishandling of the situation. In another instance, Grassley claimed he was the one being “rudely interrupted” when Sen. Kamala Harris (D-Calif.) requested Republicans share documents that were the focus of some questions directed to Ford.

The moments with Grassley, both tense and shocking, likely further damaged Republicans’ standing as Ford spoke publicly for the first time, in deeply emotional terms, of her sexual assault allegations against Kavanaugh.

“Indelible in the hippocampus is the laughter,” Ford said as her voice broke. “The uproarious laughter between the two and their having fun at my expense.”

Grassley’s aggression aside, many also noted that the five-minute, “female assistant” format the chairman had specifically imposed for Thursday’s hearing was also backfiring.

Christine Blasey Ford testifies on what she remembers most vividly from the alleged assault: "Indelible in the hippocampus is the laughter. The uproarious laughter between the two and their having fun at my expense… I was, you know, underneath one of them while the two laughed" pic.twitter.com/2HZtC27RhU