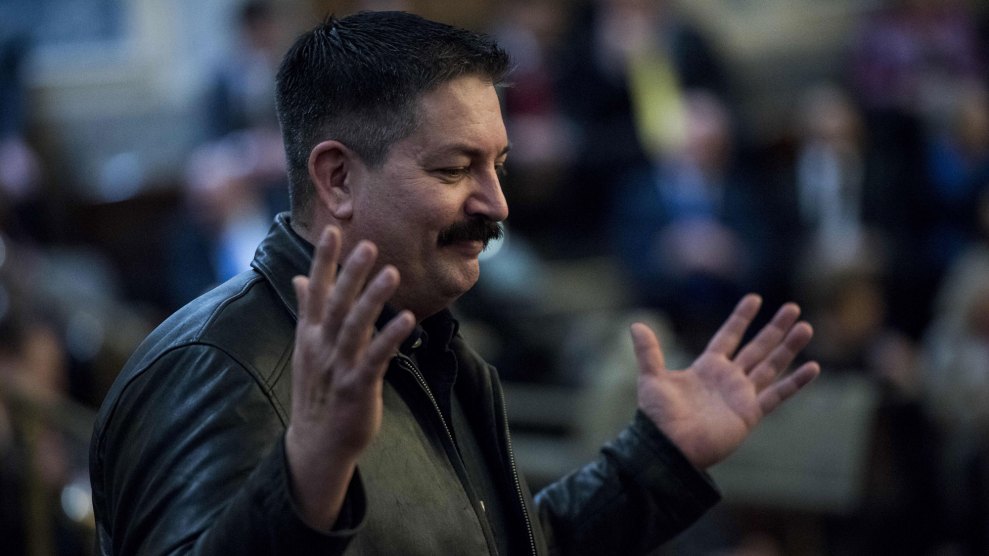 Congressional Leadership Fund, a super-PAC tied to retiring Speaker of the House Paul Ryan, has been spending big this summer in support of Republicans fighting to hold the House of Representatives. Much of what CLF does is the dirty work—the sometimes over-the-top attacks that campaigns would rather not put their name on. (Like so.)

One of CLF’s big targets this fall is Wisconsin’s first district, where Democrat Randy Bryce—known as the “Iron Stache”—is challenging Republican Brian Steil for the House seat Ryan currently occupies. The group has launched a $1.5 million push to keep the district in GOP hands, and the message is pretty direct: Bryce is a criminal who has been arrested nine times.

Bryce’s brother, James, is supporting his opponent. (“My brother is a Republican and we don’t talk politics because we have different views,” Randy Bryce explained to the Milwaukee Journal Sentinel.) Today, the CLF began running a new ad featuring James Bryce, who happens to be a Milwaukee police officer. In the ad, James says his brother calls cops like him “terrorists”:

New ad in #WI01 features Randy Bryce’s brother detailing why he is voting for Bryan Steil for Congress. https://t.co/hAowILqHUY pic.twitter.com/On3IgRG89N

This isn’t entirely out of the blue—James Bryce briefly considered running for the Republican nomination in this district after Ryan announced his retirement. Still, not your typical attack ad. So, what’s going on here?

Bryce’s arrest record was litigated extensively during his Democratic primary, thanks to his opponent, Janesville school board member Cathy Myers. The basic facts come from a CNN report in July. Most notably, Bryce was arrested in 1998 for a DUI. That’s pretty bad, and Bryce has made no effort to say otherwise. There’s also a 1991 arrest for marijuana possession, destruction of property, trespassing, and theft, on the night of his 27th birthday. Surely there’s some kind of story there, but we don’t have it; the relevant court records no longer exist and his campaign declined to elaborate on the specifics of the incident. Bryce’s campaign says he doesn’t recall the precise legal disposition of the case, but that he “didn’t pay any fine or serve time.” CNN was able to confirm the trespassing and theft cases were dropped.

The bulk of his arrests—as often happens with poor and working-class people pressed for time and money—stem from  a series of iterative run-ins with the law snowballing from previous legal trouble: two arrests for missing court appearances and four suspended driver’s licenses.

That adds up to seven, none more recent than 2003. The ad’s evil genius is in how they get to nine: all of the images in the ad come from two incidents this decade where Bryce was arrested while protesting conservative policies.

The mugshot, for instance, is from 2011, when Bryce was arrested leading in a sit-in at Republican Sen. Ron Johnson’s Milwaukee office. He described what happened after being brought in:

We occupied the jail. We had a party going on in there. We had blacks, Hispanics, old, young, male, and female. We were banging on the walls: “this is what democracy looks like.” I guess it was as much fun as you could have in a holding cell in downtown Milwaukee.  They held us longer than they needed to. But we were expecting it. Soon as we got there, we told the police: “If we had jobs we wouldn’t be here.” We told them: “We’re not the bad guys; we’re standing up for you, too.” They had furloughs, remember. When we left they told us: “You know we can’t pick a side here. But you guys went about it the right way. Thank you.”

Not exactly John Dillinger. Incidentally, the protests that shook Wisconsin that year over a plan (which was ultimately successful) to effectively end collective bargaining for public employees, were broadly supported by the state’s police union.

The rest of the footage in the ad comes from just this March, when both Bryce and Myers were arrested protesting the Trump administration’s immigration enforcement actions. It’s normal for candidates to tout their opponent’s arrest record, but it’s highly unusual to specifically call out an arrest made while undertaking peaceful protest.

Insisting you were only really arrested seven times is not, in itself, a very good campaign talking point, but off course that’s not the message Bryce is running on. Having established his own identity as a union ironworker, he’s now pushing to define his opponent, Brian Stiel, a corporate lawyer and former Ryan staffer, as the kind of guy who fires working-class people like him.

Here’s a characteristic spot, attacking Stiel for having bragged about outsourcing a Wisconsin factory:

In that sense, the race in southern Wisconsin is good snapshot of where both parties are at right now. Democrats like Bryce are running on a slate of left-leaning economic policies. Republicans across the country are struggling to hold onto usually red seats not by pushing the party’s legislative agenda—say, tax cuts or stripping people of health insurance—but by running ads about Antifa, Colin Kaepernick, and MS-13, and decrying Democrats, in Trumpian fashion, as cop-bashing bandits.