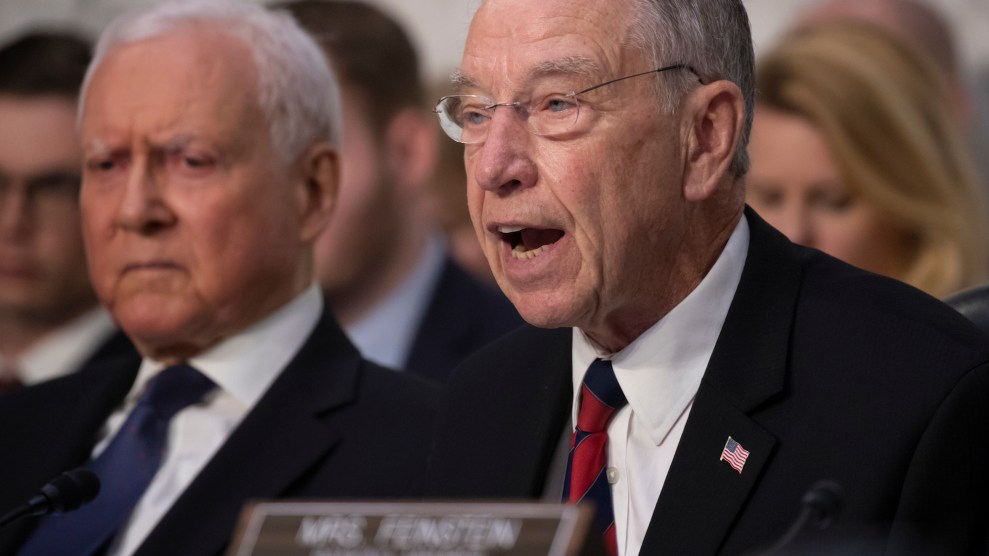 Republicans have been trying so hard not to repeat the Anita Hill-Clarence Thomas debacle, in which an all-white, all-male panel of senators eviscerated the Oklahoma law professor who said Thomas had sexually harassed her. Today, the Republicans on the Senate Judiciary Committee are still an all-white, all-male bunch—there’s never been a Republican woman on the committee—but they’ve taken pains to delicately step around the allegations made by Palo Alto psychologist Christine Blasey Ford, who has charged that Supreme Court nominee Brett Kavanaugh sexually assaulted her in high school. Republican senators have made noise about respecting and letting her be heard, and are most definitely not trying to destroy her credibility by attacking her character or mental stability or calling her a liar. But despite the obvious effort to prove they’ve learned from Anita Hill, Republicans are still failing.

Leading the charge on that front is Sen. Orrin Hatch (R-Utah), who on Tuesday insisted Ford must be “mistaking something.” In another interview he said, “Whoever she is, she’s mixed up.” It’s not, he implied, that she’s a liar, of course—just confused. You know, the way women get.

Hatch has gone down this road before. The 83-year-old senator was on the Judiciary Committee during the Thomas confirmation circus, and his take on Ford and her allegations against Kavanaugh is almost identical to how he described Hill in a CNN interview in 2010:

I believe that Anita Hill was an excellent witness. I think she actually believed and talked herself into believing what she said. There was a sexual harasser at that time, according to the sources I had, and he was her supervisor, he just wasn’t Clarence Thomas. I think she transposed that to where she believed it because she was outed by the feminist women at that time and she couldn’t change her mind after — she couldn’t change her tune. And that’s what happened.

Behind the scenes, the Bush White House also worked hard to avoid calling Hill a straight-out liar, instead pushing Hatch’s idea that she was simply confused. In one case, White House lawyers suggested she suffered from sexual fantasies and a disorder called “erotomania,” in which sufferers believe things that hadn’t happened.

That wild theory came to the White House by way of President George H.W. Bush’s nephew, who’d talked to a psychiatrist at a dinner party at his mother’s house, according to the book Strange Justice: The Selling of Clarence Thomas by Jane Mayer and Jill Abramson. The psychiatrist suggested erotomania might explain how Hill passed a polygraph test.

One of the promoters of this theory was Mark Paoletta, who was then an aide to White House counsel C. Boyden Gray and who invited the psychiatrist to testify at the hearing. (The committee later thought better of it and he didn’t appear.) Paoletta currently works in the Trump administration as general counsel to the Office of Management and Budget. Previously, he helped shepherd Trump Supreme Court nominee Neil Gorsuch through his confirmation process, working as Vice President Mike Pence’s chief counsel until January of this year. Neither the White House nor the OMB responded to questions from Mother Jones about whether Paoletta is currently assisting with the Kavanaugh nomination.

No one on the Judiciary Committee ever raised the erotomania theory during Thomas’ confirmation hearing, but a lawyer on Thomas’ defense team did give a public statement suggesting Hill suffered from a delusional disorder as an explanation for her successful polygraph test results.

Women were duly horrified by all this, and the following year, their anger put 24 women in the House and four in the Senate—most of them Democrats—including Sen. Dianne Feinstein (D-Calif.), who is now the ranking Democrat on the Judiciary Committee.

This time around, most members of the committee have been somewhat more restrained. Judiciary Chairman Chuck Grassley (R-Iowa) has said Ford “shouldn’t be threatened or insulted” and that “she deserves to be heard.” He tweeted:

Dr. Ford shouldn’t be threatened or insulted & she deserves to be heard. I expect my colleagues on both sides of the aisle to be respectful & treat this situation with the sensitivity it deserves 1/4

But Grassley can’t control all his colleagues, like Hatch—or the GOP surrogates who’ve taken to the airwaves to suggest Ford is simply making up her story as part of a political ploy by Democrats. On Wednesday, Trump cheerleader, lawyer, and regular Fox News guest Joseph diGenova told Tucker Carlson that Ford “really doesn’t want to testify because she’s going to look like the loon that she is. She may very well believe everything she’s saying, and that is one of the signs of lunacy, believing something that isn’t real.”

Then on Thursday night, Ed Whelan, a Kavanaugh friend who is also helping with his nomination fight, channeled Hatch circa 1991 when he posted a Twitter thread suggesting Ford was actually attacked not by Kavanaugh, but by another guy, a former Georgetown Prep classmate of the nominee, whom Whelan named. (Ford released a statement emphatically asserting that she knew both men and that “there is zero chance that I would confuse” Whelan’s suspect with Kavanaugh.)

And of course, there’s the ultimate wildcard: the president. After showing uncharacteristic restraint—he managed to go five whole days without taking to Twitter to attack Ford by name—Trump finally broke loose Friday morning and tweeted:

I have no doubt that, if the attack on Dr. Ford was as bad as she says, charges would have been immediately filed with local Law Enforcement Authorities by either her or her loving parents. I ask that she bring those filings forward so that we can learn date, time, and place!

These responses illustrate why Republicans on the Judiciary Committee desperately want to find a woman to be an outside counsel to question Ford should she testify next week. They clearly recognize there’s no way one of them isn’t going to say something sexist and insulting on live TV. And they don’t have the luxury of alienating more women: Only 38 percent of women are likely to support a Republican candidate in the upcoming midterm elections, according to a recent poll from the Pew Research Center. A June CNN poll put that figure even lower, at 33 percent. Women vote in higher rates than men, and Republicans can’t maintain their majorities in the House and Senate without them.

That’s why, over the past year or so of #MeToo revelations reaching some of the highest rungs of power, many Republicans have tried to show their solidarity with women over the issue—even some on the Senate Judiciary Committee poised to interrogate Ford next week.

Take Sen. Mike Crapo (R-Idaho). In October 2017, after the New York Times reported on the serious sexual misconduct allegations against film mogul Harvey Weinstein, Crapo issued a statement saying, “For those who have experienced any form of sexual assault or harassment, I support you. I hear your echoes of solidarity with one another—as well as the silence of those suffering quietly.”

Crapo has been pretty quiet over the past week since the allegations against Kavanaugh first surfaced. But in an email to Mother Jones on Tuesday, he said, “Dr. Ford’s accusation should be taken seriously, investigated and properly heard by the Senate Judiciary Committee. The Senate Judiciary Committee is currently conducting a thorough investigation of the accusation, which will be followed by an open public hearing at which the Committee will hear from both Dr. Ford and Judge Kavanaugh. I support setting back the final committee action on this nomination until these appropriate processes have been completed.”

Whether he still votes for Kavanaugh remains an open question. (Crapo, a member of the Church of Latter-Day Saints, called for Trump to drop out of the 2016 presidential race in light of the Access Hollywood video, but then re-endorsed him a few weeks later.)

Sen. Ted Cruz (R-Texas), who is the fight for his life in a reelection campaign this year against upstart Rep. Beto O’Rourke (D-Texas), has been unusually civil. On Monday, not long after the allegations first emerged against Kavanaugh, Cruz released a statement saying, “These allegations are serious and deserve to be treated with respect. Professor Ford should have a full opportunity to tell her story before the Judiciary Committee, and Judge Kavanaugh should have a full opportunity to defend himself.”

Since then, he’s maintained radio silence, along with many other of his colleagues on the Judiciary Committee. Aside from Sen. Lindsey Graham (R-S.C.), who has been spouting off regularly about the need to confirm Kavanaugh before the midterms—regardless of what Ford might have to say—most of the committee members seem to have adopted a “first, do no harm” approach.

Perhaps the best sign that 2018 isn’t a carbon copy of 1991 is that within hours, Whelan’s tweetstorm about the existence of a Kavanaugh doppelgänger had been deleted, conservatives were furious with him, and he was forced to apologize.

I made an appalling and inexcusable mistake of judgment in posting the tweet thread in a way that identified Kavanaugh's Georgetown Prep classmate. I take full responsibility for that mistake, and I deeply apologize for it. I realize that does not undo the mistake.