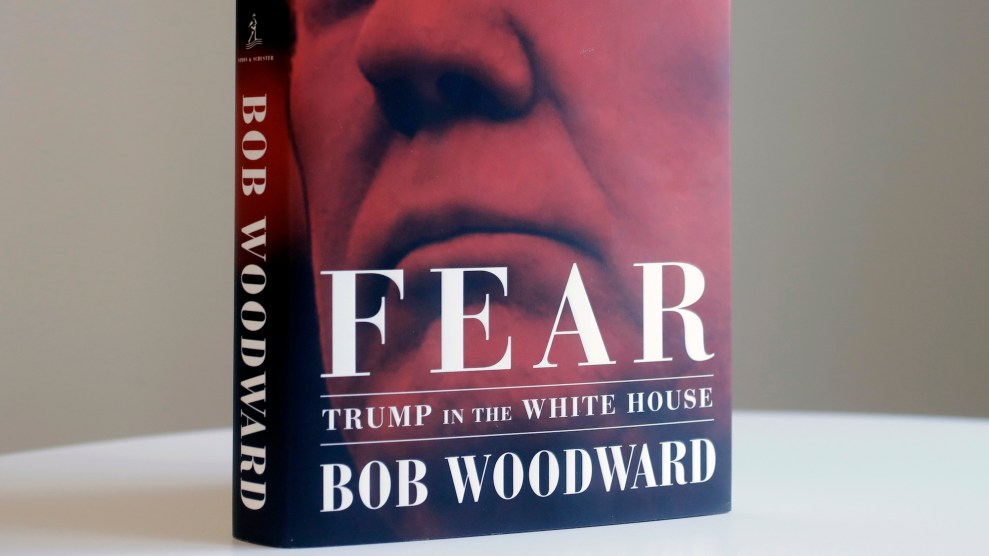 President Donald Trump stayed on the warpath Monday against Washington Post reporter Bob Woodward, who appeared on the Today show to promote his new book Fear: Trump in the White House. The book is an unflattering portrait of Trump, and Woodward said on the show Monday morning that he’s never seen a president as “detached from reality” as Trump.

Trump fired back with a series of tweets, calling Woodward’s book “fiction.” He retweeted his own tweet from Friday in which he called the book a “scam.” In another tweet, Trump attempted to bolster his case by quoting Katelyn Caralle, a breaking news reporter for the conservative Washington Examiner, who said, “You cannot take this book too seriously.” According to her Examiner bio, Caralle came to Washington in 2016 to work as an intern at the conservative Heritage Foundation, then moved to the Washington Free Beacon as a media analyst before joining the Examiner.

“I’m taking this book with a grain of salt & everyone should do the same. Multiple sources, but almost every one of them has come out and discredited the claims made by Woodward. You cannot take this book too seriously.” Katelyn Caralle, Washington Examiner

The quote comes from Caralle’s Wednesday appearance on The Daily Ledger, which calls itself “the only daily, national, Constitutionally conservative cable TV show that analyzes political news of the day.” This obscure show is part of the One America News Network, a pro-Trump cable channel whose millionaire owner reportedly banned stories about polls showing that anyone but Trump was winning during the 2016 presidential campaign. The network has promoted a number conspiracy theories since its founding in 2013.

In April, for instance, it ran a segment making the bogus claim that the California legislature was considering a bill that would ban Bibles. The network has actively promoted conspiracy theories about Seth Rich, a staffer for the Democratic National Committee who was killed during an apparent robbery in Washington in 2016. Last year, the network offered $100,000 for information relating to Rich’s death. The channel was popular with US Senate candidate Roy Moore, whose 2017 campaign in Alabama was derailed by accusations that he’d molested underage women. OANN defended Moore in a number of segments and on election night reported falsely that Moore had won the Senate race in a landslide.