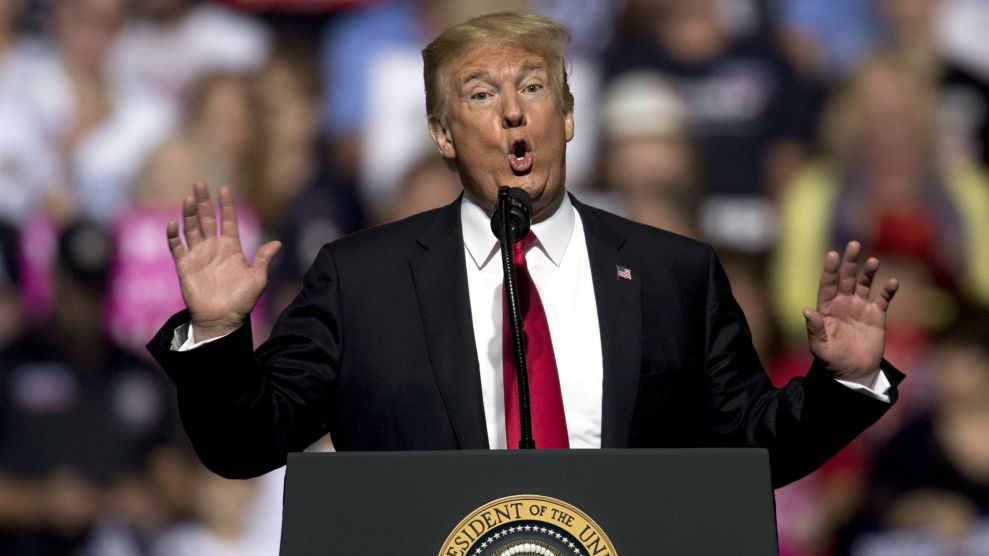 On Saturday night, President Donald Trump was back doing one of his favorite things: holding forth during a giant campaign rally. Speaking to thousands of cheering supporters at the Wesbanco arena in Wheeling, West Virginia, Trump sought to get out the vote for Republican Senate nominee Patrick Morissey, who is trying to unseat Democratic Sen. Joe Manchin.

Trump talked about the “horrible, horrible, radical” conduct of Democrats during the Brett Kavanaugh hearings last week. He also called Democrats “angry and mean and nasty and untruthful,” and implied that Sen. Dianne Feinstein (D-Calif.) leaked the letter from Dr. Christine Blasey Ford detailing sexual assault allegations against Kavananugh—a charge she has denied.

But, in a bizarre aside, the president also declared his love for brutal North Korean dictator Kim Jong Un.

Trump says this — earnestly! — about Kim Jong Un: “We went back and forth, then we fell in love. He wrote me beautiful letters. And they are great letters. We fell in love.” pic.twitter.com/05KpsRgkZJ

“I like him, he likes me!” Trump declared, adding, “We were going back and forth, and then we fell in love. No really! He wrote me beautiful letters. And they are great letters. We fell in love.”

The comments came the same day North Korea’s foreign minister told the United Nations General Assembly the country will refuse to unilaterally give up its nuclear arsenal due to continued sanctions against the nation, deepening its distrust of the United States.