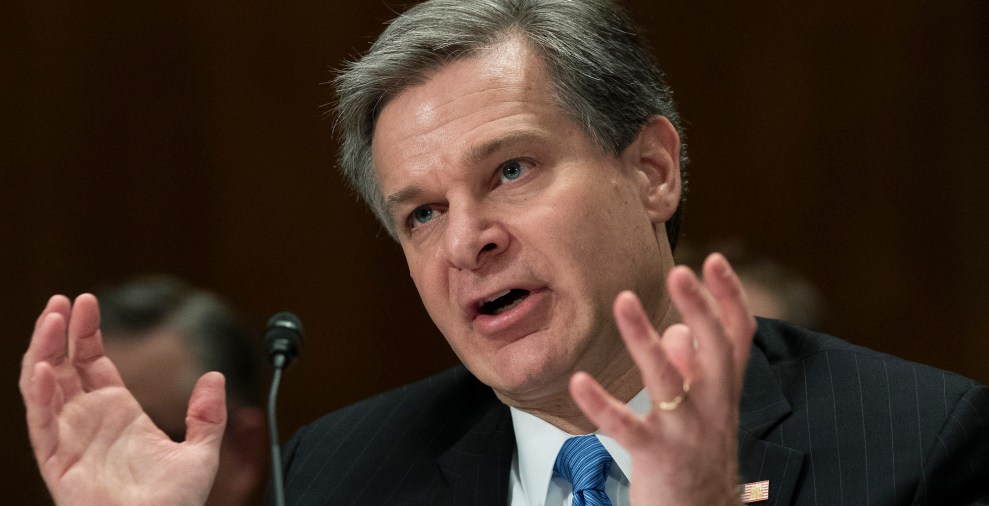 FBI Director Christopher Wray testifies during a hearing of the Senate Committee on Homeland Security and Governmental Affairs on Wednesday.Alex Brandon/AP

Under questioning from Sen. Kamala Harris (D-Calif.) during a Senate hearing, Wray stated that “the investigation was very specific in scope, limited in scope” and that the White House had set these strict parameters for the probe.

On September 28, with prodding from Sen. Jeff Flake (R-Ariz.), Republican members of the Senate Judiciary Committee asked the FBI to reopen the background investigation into Kavanaugh. The investigation was supposed to shed light on sexual assault allegations by California psychology professor Christine Blasey Ford and others, who have suggested that Kavanaugh engaged in sexual misconduct in high school and college. But Democrats quickly complained that the White House had restricted the ability of the FBI to conduct a thorough investigation.

Democrats had sent the FBI a list of at least two dozen potential witnesses who were familiar with Kavanaugh—and his drinking habits—during his high school and college years. Many of them have suggested that Kavanaugh’s testimony about his youthful drinking was not truthful, and they had been attempting to reach the FBI to tell their stories. Deborah Ramirez, who accused Kavanaugh of sexual misconduct at Yale, also submitted at least 20 names to the FBI, requesting they be interviewed to help corroborate her story. But the New York Times reported that the White House and Senate Republicans had limited the FBI to interviewing only four witnesses. Eventually, nine people were interviewed, but they did not include Kavanaugh or Ford.

In response to the criticism, President Donald Trump shot back during an interview in the Rose Garden that he had not restricted the FBI in the Kavanaugh investigation. “The FBI should interview anybody that they want within reason, but you have to say within reason,” he said.

On Wednesday, Harris pressed Wray for details about who in the White House had directed the FBI to keep its investigation so limited. Wray hedged and refused to answer a question about whether White House counsel Don McGahn had been one of the parties involved in restricting the investigation. He also would not commit to turning over to the Senate documentation of any written instructions the White House had given the FBI about the investigation. And when Harris asked Wray whether the FBI had looked into allegations that Kavanaugh had lied to Congress during his confirmation hearing, Wray demurred. “That’s not something I can discuss here,” he said.