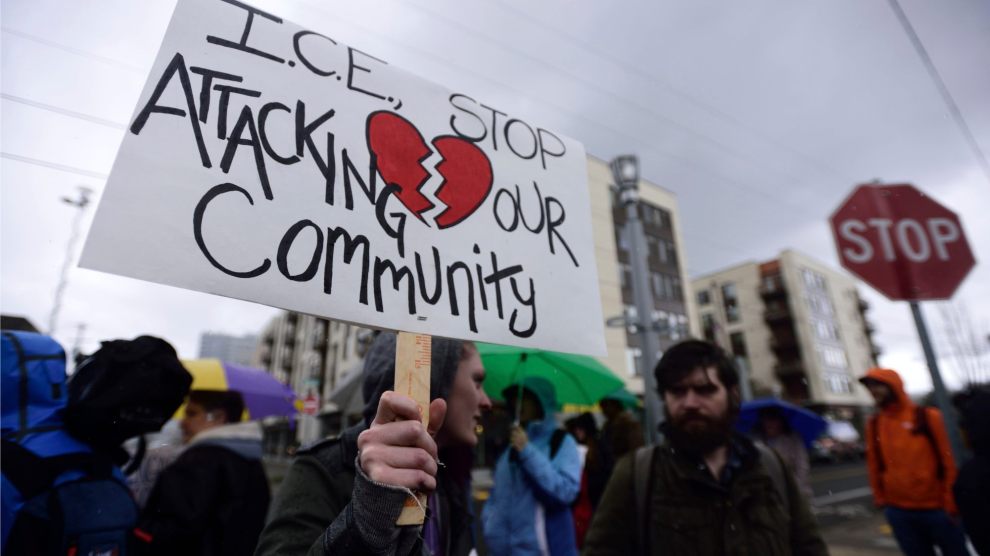 Protesters outside the Immigration and Customs Enforcement building in Portland, Oregon.Alex Milan Tracy/Sipa USA via AP

Thirty years before blue states like California went to war with the Trump administration over enforcing immigration policies, an Oregon state representative named Rocky Barilla proposed the law that created the nation’s first sanctuary state. At the time, he recalls, it wasn’t controversial. “Republicans loved it,” says Barilla, now retired.

The 1987 bill states that state and local law enforcement resources can’t be used to find or detain people whose only violation of the law is being in the country illegally. Law enforcement officials even helped Barilla draft the bill; they liked that they wouldn’t have to waste their time enforcing federal immigration law. It passed the legislature nearly unanimously.

But the political calculus on sanctuary bills has changed dramatically since then. This year, three conservative Oregon legislators, backed by hardline anti-immigrant groups, have put a measure on the November ballot that would repeal the 1987 law, thrusting the state into the center of the debate over sanctuary that’s intensified since President Donald Trump took office.

Supporters of the initiative, known as Measure 105, claim that the current law encourages illegal immigration and that local police should be allowed to help enforce federal law. A coalition called Oregonians United Against Profiling, backed by nearly 500 civil rights organizations, businesses, and law enforcement leaders, argues that the measure would lead to racial profiling.

Those concerns echo those of the law’s original sponsors, who were worried about the racial profiling of Latinos in the 1970s and 80s. Barilla was a recent law school graduate working on civil rights cases in Salem, the state capital, when he became involved in one such case. In 1977, a man named Delmiro Trevino told Barilla he’d been sitting in a restaurant in Independence, Oregon, when local cops came up to him and started asking about his citizenship. One officer grabbed Trevino—who was a citizen—by the arm and interrogated him on the spot, letting him go only after another officer recognized him as a longtime resident.

At the time, the law wasn’t controversial. “Republicans loved it,” says Barilla.

Barilla would represent Trevino and other Oregonians of Mexican descent in a class-action lawsuit against local police and the Immigration and Naturalization Service. The suit argued that police were racially profiling Mexican-American residents by regularly engaging in the kind of harassment Trevino experienced. The suit was dismissed after the INS agreed to clarify its policy, but the experience motivated Barilla to sponsor the sanctuary law when he became the state’s first Latino legislator a decade later.

Oregon’s law is one of many sanctuary policies that restrict the ways in which state and local governments can cooperate with immigration officials. Oregon’s law is limited compared to the policies that followed it; it prevents police from helping ICE find undocumented immigrants who haven’t committed any crimes but allows for some collaboration with immigration officials inside jails. For instance, some Oregon jails send reports to ICE about foreign-born inmates, sometimes sharing their release dates so that ICE can take undocumented immigrants into custody.

“This is a fairly reasonable, practical law,” says Andrea Williams, executive director of the immigrant rights group Causa Oregon, which is leading the effort to oppose the measure. “It does not protect people who have committed a crime.”

Many Oregon counties and cities also have restrictions on how their police can coordinate with ICE. These policies wouldn’t be affected by the ballot measure. And even if Measure 105 passes, it’s not entirely clear that state and local law enforcement agencies would have the authority to stop and question residents about their immigration status. The ACLU of Oregon argues that state privacy protections would still prohibit this. Nevertheless, advocates fear that some officers would take advantage of the legal ambiguity until the matter is settled in court.

Opponents’ concerns echo those of the law’s original sponsors, who were worried about racial profiling of Latinos.

It’s also possible that local police could enter into more formal agreements with ICE that would give them broader authority to enforce immigration law. The Trump administration has been making aggressive use of 287(g) agreements, which allow police to perform some of the functions of immigration officials. The Oregon State Sheriffs’ Association has interpreted the sanctuary law to mean that police are prohibited “from acting as immigration officers,” and no department in the state has entered into a 287(g) agreement. But that could change if the law is repealed.

Even without these official agreements, Measure 105 could empower police to make ICE’s job easier in a variety of ways. For example, immigration officials could participate in ride-alongs with cops. Police would also be able to provide logistical support for ICE raids: During an April raid at a meatpacking plant in Tennessee, for example, law enforcement helped out by blocking off nearby streets.

Civil rights groups and some members of law enforcement say this kind of collaboration can erode trust between police and immigrant communities. “Our justice system doesn’t work if people are afraid to report crime,” says David Rogers, executive director of the ACLU of Oregon.

State law enforcement leaders are divided on the issue. In a letter endorsed by 16 of Oregon’s 36 sheriffs, Clatsop County Sheriff Tom Bergin said police weren’t interested in going after immigrants who report crimes and argued that law enforcement should “have the ability to work with our federal partners.” He also claimed that immigration violations are “precursors to other crimes” such as identity theft—even though studies have found that immigrants commit crimes at lower rates than people born in the country.

So far, it looks like most Oregon voters are not buying this argument. The only poll on the measure found that 31 percent of voters support repealing the sanctuary law, while 50 percent oppose it. But the poll also showed a large number of undecided voters, and anti-immigrant groups have been successful before in Oregon. In 2014, they helped defeat a ballot initiative that would have allowed undocumented immigrants to get driver’s licenses.

“The battle for Measure 105 sets the stage for what happens in the rest of the country,” says Melissa Keaney, a staff attorney at the National Immigration Law Center, an immigrant advocacy group. Keaney says anti-immigrant groups like to test out new campaigns in Oregon, where it’s relatively cheap to get a measure on the ballot. The organizations backing the measure, the Federation for American Immigration Reform and Oregonians for Immigration Reform, have both been classified as “hate groups” by the Southern Poverty Law Center.

To fight the measure, Oregonians United Against Profiling has attracted support from a host of state politicians and law enforcement officials, including the sheriffs of Oregon’s two most populous counties. They also have support from companies located in the state such as Nike and Columbia Sportswear. So far, the coalition has raised almost $1.5 million as opposed to $380,000 raised by the measure’s supporters.

The fight over the ballot measure has come as a surprise to Barilla, who says his sanctuary law was a “non-issue” when he was in the legislature. “I think people who are educated about it will understand that this is not an anti-police law,” he says. “It’s just setting local priorities. Police need to have trust with communities.”