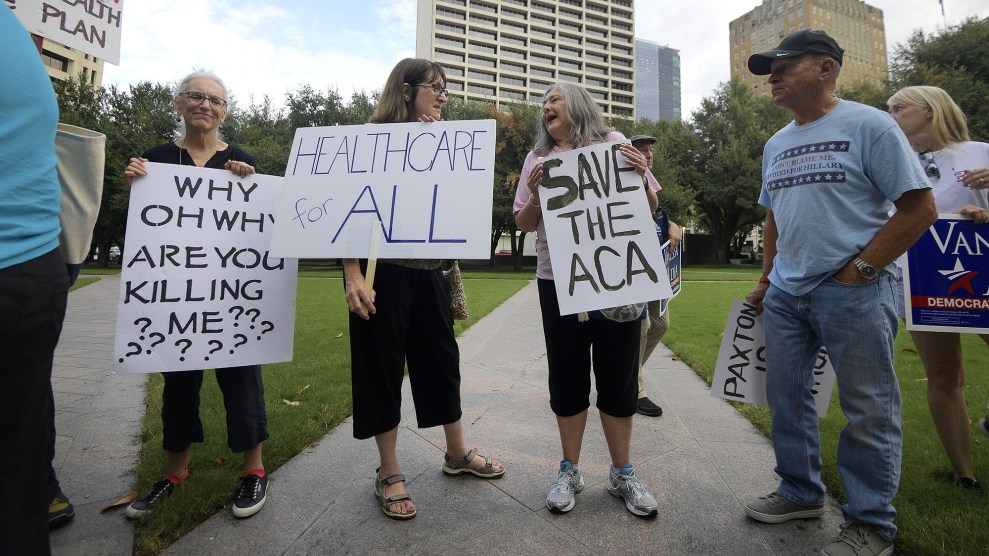 Obamacare supporters rally in Fort Worth, Texas, in September.Max Faulkner/Zuma

As the midterm elections approach, Republicans have been ramping up their claims that they want to protect insurance coverage for people with preexisting conditions—essentially endorsing a popular Obamacare provision they’ve repeatedly tried to repeal.

House Republicans have voted to repeal, replace, or wreck the Affordable Care Act more than 50 times since 2011. According to recently released data from the Center for American Progress, a liberal think tank, 67 Republican members of Congress in close reelection races have voted for at least one of those efforts to undermine Obamacare. Of those, 32 have also said they want to defend the act’s protections for people with preexisting conditions.

Then: Repeal. Now: Protect.
“We wanted to look at the votes where there’s no way they could get around it,” says Will Ragland, CAP’s managing director of communications. Nonetheless, many Republicans have tried to run away from their anti-Obamacare history. Several, including Iowa Rep. David Young and California Rep. Dana Rohrabacher, have recently released ads touting their support for people with preexisting conditions. Young and Texas Rep. Pete Sessions have introduced nonbinding resolutions that protections for preexisting conditions should be included in future health care legislation that might undo other parts of Obamacare.

All Republicans support people with pre-existing conditions, and if they don’t, they will after I speak to them. I am in total support. Also, Democrats will destroy your Medicare, and I will keep it healthy and well!

Yet Trump has also repeatedly supported policies that would kill those protections:

Trump spent most of 2017 championing Republican legislation to repeal Obamacare—bills that would have have allowed insurance companies to make policies unaffordable for people with preexisting conditions. When the House passed a bill last year that would have resulted in 24 million fewer people having health insurance, Trump summoned Speaker Paul Ryan and the rest of House leadership to the White House for a celebration. And earlier this year, the Trump administration signaled its support for an ongoing lawsuit to invalidate Obamacare, including the protections for people with preexisting conditions.