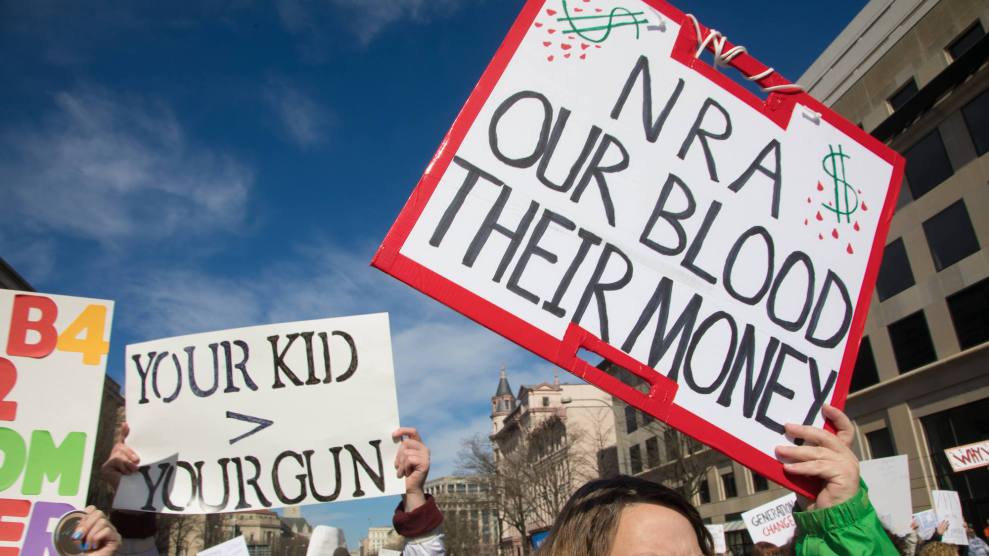 Protesters at the March for Our Lives rally in Washington, DC, on March 24, 2018Jeff Malet/Newscom via ZUMA

After the Parkland school shooting in February, student survivors issued an ultimatum to lawmakers: Stop accepting campaign contributions from the National Rifle Association, or we’ll vote you out of office. It’s a threat that some GOP congressional candidates now seem to be taking seriously. According to a Mother Jones review of federal election filings, half a dozen Republicans—some of whom are facing hotly contested races—have returned or haven’t deposited recent donations from the NRA. That appears to be a remarkable change from 2016, when no congressional candidates refused money sent by the controversial gun rights group.

Rep. Steve Knight, a vulnerable GOP incumbent who represents suburban Los Angeles county and has consistently received “A” ratings from the NRA, has declined a total of $4,000 in NRA contributions this year, according to filings with the Federal Election Commission. Last month, Knight’s campaign returned a $2,500 campaign contributions to the NRA after initially depositing that money in August. The NRA also voided a $1,500 May contribution that Knight never deposited.

In the FEC documents, Knight’s campaign listed the disbursement date for the $2,500 refund as September 19, 2018—one day after Mother Jones reported on the contribution and noted that it seemed to contradict Knight’s claim that he had not taken any money from the NRA “lately.” On the same day the refund was apparently issued, a Knight campaign spokesperson told the Santa Clarita Valley Signal that the campaign had deposited the money by mistake and had, in the paper’s words, issued a refund to the NRA in “recent weeks.” Knight accepted—and has not returned—a separate NRA contribution of $1,000 made in 2017, before Parkland. Knight’s campaign has not responded to multiple requests for comment.

Bryan Steil, a former aide to House Speaker Paul Ryan (R-Wis.) who’s running to replace his old boss in Congress, also didn’t deposit a check the NRA sent him at the end of August. FEC records show that Steil, who promises on his campaign website to defend Second Amendment rights, has not accepted any money from the group this cycle.

Gun reform has emerged as a surprising wedge issue in the battle to succeed Ryan, who benefited from almost $50,000 in gun rights money during his nearly two decades in Congress. Steil’s Democratic opponent, Randy Bryce, has called upon Steil to reject the NRA, and Fred Guttenberg and Manuel Oliver, who lost their children in the Parkland shooting, campaigned with Bryce in the district earlier this month. Steil’s campaign did not respond to requests for comment.

Knight and Steil join four other Republican congressional candidates who didn’t deposit contributions issued by the NRA in the months after the Parkland massacre: Rep. David Young of Iowa; Rep. Glenn Grothman of Wisconsin; Young Kim, who is running for an open seat in southern California; and Anthony Gonzalez, who is running in an open Ohio district. The NRA has since voided all of those contributions. A voided check doesn’t necessarily mean the candidate wouldn’t ever accept funds from the organization—if the check is lost in the mail, for example, the NRA could void that contribution and presumably issue a new one. But campaign finance records indicate no effort by the NRA to reissue the checks. None of the campaigns responded to requests for an explanation. Neither did the NRA.

Many of these same candidates have also kept surprisingly quiet about their ties to the NRA. For example, Knight, Steil, and Kim—who face particularly competitive races—have all received endorsements and “A” ratings from the group, but none of those endorsements appear on their campaign websites.

Republicans aren’t the only ones who seem to be shying away from NRA cash. The Blue Dog PAC, a group that helps elect moderate Democrats to Congress, returned an NRA contribution in April after the Miami Herald called attention to it. No Democratic congressional candidates have taken NRA money this cycle.

The FEC filings also show that the NRA tried to cut a check this year to Dino Rossi, the Republican facing a tight race for the open seat in Washington’s 8th congressional district. But for some reason, the donation was addressed to the campaign committee for Rossi’s unsuccessful 2010 Senate bid against Democrat Patty Murray. The check has since been voided. A spokesperson for Rossi says that the campaign has not been in touch with the NRA and that, to the best of the campaign’s knowledge, the gun rights group made no attempt to redirect the check to his congressional campaign. Rossi, who has faced criticism this year for taking NRA funds during the 2010 race, has not accepted any money from the group this cycle and has highlighted that decision on the campaign trail.