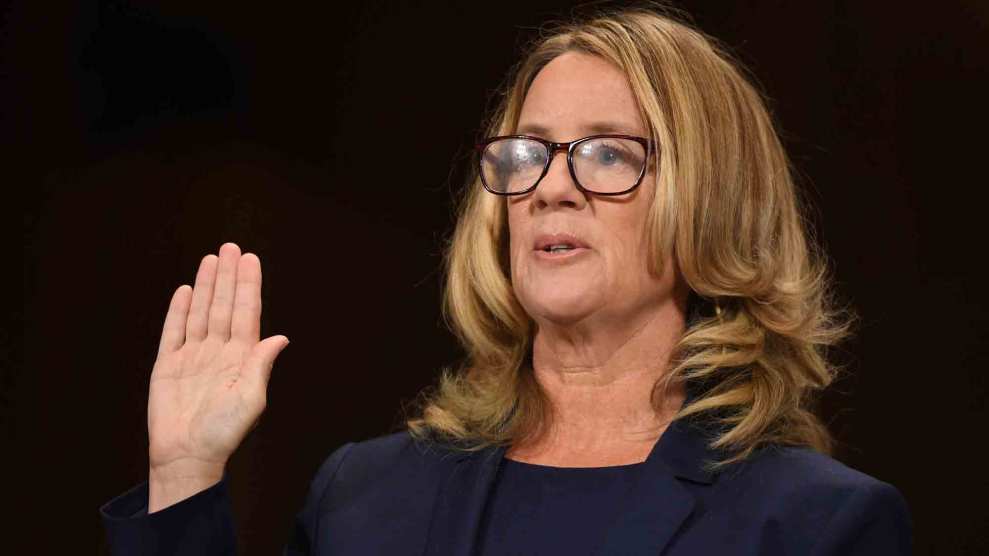 On Wednesday night, the lawyers for Christine Blasey Ford responded sharply to the news that the Trump White House had blocked the FBI from interviewing her about her allegation that she was sexually assaulted by Supreme Court nominee Brett Kavanaugh in 1982. This probe, her attorneys said, “cannot be called an investigation. We are profoundly disappointed that after the tremendous sacrifice she made in coming forward, those directing the FBI investigation were not interested in seeking the truth.” The decision to not interview Ford, Kavanaugh, and dozens of other witnesses related to her allegation and Deborah Ramirez’s claim that Kavanaugh engaged in sexual misconduct during his college days has drawn much criticism from Democrats and others, as Republicans cite the FBI’s report—which has been presented to the White House and Senate—to contend there is no evidence Kavanaugh committed any wrongdoing in these cases.

“When you’re in front of the FBI, you cannot refuse to answer questions, you cannot attack the agents, you cannot change the subject,” a Democratic member of the committee says. “The White House did not want Kavanaugh in such a situation. And if he said anything to the FBI that could prove false, he could end up in a lot of trouble.”

The absence of Ford and Kavanaugh interviews in the investigation offers Ford allies and other critics an obvious and justifiable talking point to challenge the legitimacy of the days-long probe. After all, the standard operating procedure for any investigation would include questioning the accuser and the accused. Forgoing these interviews undermines the FBI’s report and makes it easy for critics to contend that this has been a sham investigation. So why would the White House take such a step? The Democrats on Senate Judiciary Committee have a theory: Trump White House officials blocked an interview with Ford because they were worried about the FBI questioning Kavanaugh.

According to Democratic sources, committee Democrats have concluded that the White House believed a Kavanaugh interview would be too risky. During the hearing last week on Ford’s allegations, Kavanaugh frequently dodged questions from Democratic senators, who were limited to five minutes of time each. He filibustered, he sidestepped queries, and he was often combative. And during the Republicans’ allotted time for questioning, Rachel Mitchell, the Arizona prosecutor retained by the committee GOPers, was not given the chance to pose many queries to Kavanaugh. Though the committee Republicans—all men—relied on Mitchell to question Ford, when it was Kavanaugh’s turn at the witness table, they essentially shoved Mitchell aside in order to issue grandstanding speeches defending Kavanaugh and assailing the Democrats. (See: Lindsey Graham.)

Kavanaugh, that is, did not undergo a true and professional grilling. An FBI interview would have been a much different experience. “When you’re in front of the FBI, you cannot refuse to answer questions, you cannot attack the agents, you cannot change the subject,” a Democratic member of the committee says. “The White House did not want Kavanaugh in such a situation. And if he said anything to the FBI that could prove false, he could end up in a lot of trouble.”

Yet there was no practical way for the White House to keep Kavanaugh off that hot seat and still allow Ford to be interviewed by the FBI. A White House order to the FBI to proceed with the Ford interview but give Kavanaugh a pass would have been widely assailed as a transparent attempt to rig the probe. Consequently, Democrats believe, the White House had to instruct the FBI to strike both Kavanaugh and Ford from the list of interview subjects. (At the hearing, Ford noted her willingness to cooperate with an FBI investigation, and Kavanaugh repeatedly refused to express support for such a probe.)

It was predictable that an FBI investigation without interviews of the primary figures would be denounced. As Sen. Richard Blumenthal (D-Conn.), a member of the committee, tweeted, “Interviewing the accuser & accused is Investigation 101. It is absolutely necessary to follow up on leads & corroborate details. The fact the FBI has not been authorized to take basic steps demonstrates the WH is turning this investigation into a sham & charade.” And the absence of these interviews highlights the fact that the FBI, following White House orders, did not contact more than 40 potential witnesses.

The White House instruction to not interview Ford and Kavanaugh, as could have been expected, has created a firestorm and undermined the credibility of the the FBI’s work and its report. The case remains unresolved. To many, it looks like the fix was in. Yet Trump and his aides, including White House counsel Don McGahn (a longtime friend of Kavanaugh), apparently preferred taking this hit over having Kavanaugh face federal investigators. It does make one wonder just what Trump, McGahn, and other White House officials feared about a Kavanaugh sit-down with the FBI.