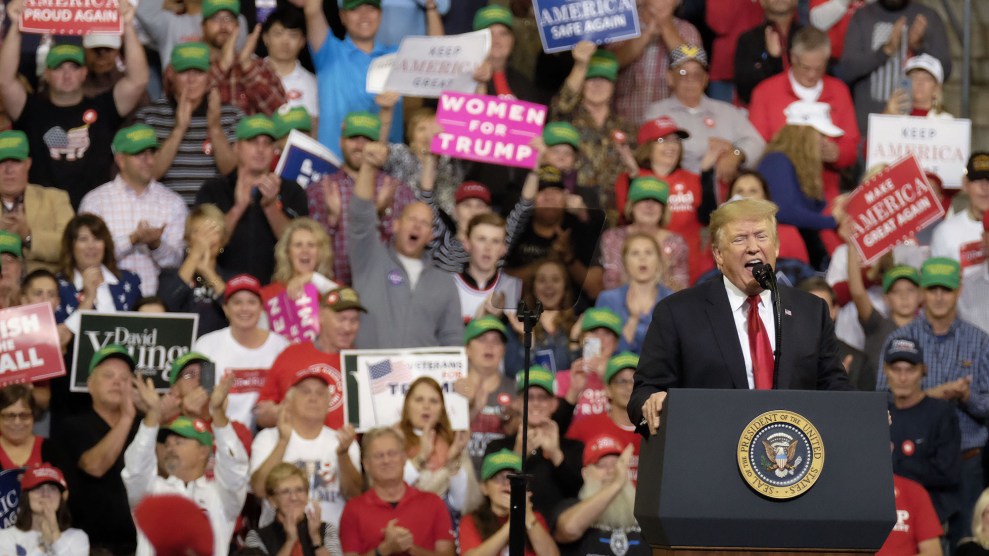 Referring to the caravan of Central American migrants who are slowly walking toward the US-Mexico border, Trump wrote on Twitter on Monday morning, “This is an invasion of our Country and our Military is waiting for you!”

Many Gang Members and some very bad people are mixed into the Caravan heading to our Southern Border. Please go back, you will not be admitted into the United States unless you go through the legal process. This is an invasion of our Country and our Military is waiting for you!

Robert Bowers, the alleged murderer in the synagogue shooting, posted and shared similar comments about the caravan on Gab, a social media platform that gives voice to white supremacists and others banned from Twitter. Bowers repeatedly referred to caravan members as “invaders,” CNN reported on Saturday. In one post, he wrote, “I have noticed a change in people saying ‘illegals’ that now say ‘invaders.’ I like this.” He also shared a post by another user that railed against the “third world caravan” as a group of “invaders,” according to the Washington Post.

The Trump administration has produced no evidence to support the president’s repeated claims that criminals are in the caravan. Department of Homeland Security press secretary Tyler Houlton made a similar claim on Twitter last week. When Mother Jones asked DHS’s press office for evidence, a DHS spokesperson who requested anonymity replied, “We cannot release data that is law enforcement sensitive. Thanks.”

Trump’s claim that “you will not be admitted into the United States unless you go through the legal process” does not make sense. Many of the caravan members plan to request asylum, which requires that a person already be in the United States. As Homeland Security Secretary Kirstjen Nielsen tweeted in June, it is legal to request asylum at official border crossings. Attorney General Jeff Sessions has also urged asylum seekers to come to ports of entry at the border.

You are not breaking the law by seeking asylum at a port of entry.