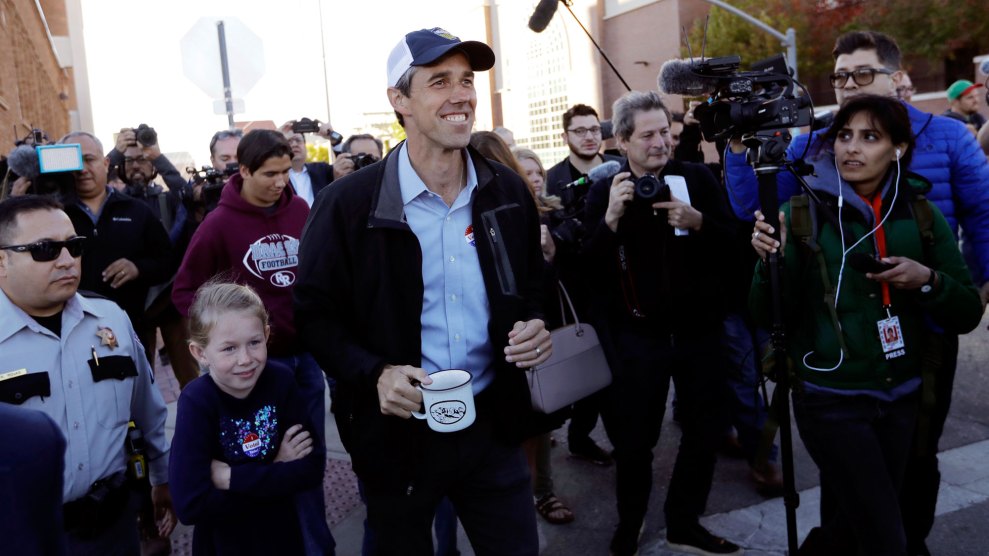 The most surprising thing about Republican Sen. Ted Cruz’s victory over Rep. Beto O’Rourke in the Texas Senate race is that it took until Election Day to call it. Texas, as Republicans took pains to point out over the last year and a half, is very Republican. It is the largest Republican state, and it is also the longest-running Republican state. Democrats have struck out in more than 123 consecutive statewide elections there dating back to the 1990s.

But it was a close race—far closer than the polls indicated—and if you put aside the preemptive narrative-setting to actually focus on the facts at hand, that’s nothing short of remarkable.

Cruz led throughout, but O’Rourke defined the campaign. Though Cruz cast himself, however improbably, as an ambassador of hope, his campaign and allied super-PACs set out to take down O’Rourke with a ruthlessness borne of urgency. Wary of a groundswell of Hispanic support, they sought to undermine O’Rourke’s standing with Latino voters by flogging a controversial downtown redevelopment plan O’Rourke once pushed in El Paso—a place Cruz had almost never visited—and by mocking O’Rourke’s use of a Spanish nickname.

Mostly, he played up O’Rourke’s condemnation of racism by recasting it as anti-cop. When O’Rourke decried the shooting of Botham Jean, a black man from Dallas, by an off-duty police officer who’d broken into his apartment, Cruz turned O’Rourke’s speech into an ad. When O’Rourke responded to a question about Colin Kaepernick with a minutes-long extemporaneous riff about patriotism and the freedom of expression, Cruz turned that into an ad. And when O’Rourke invoked the work of the journalist Michelle Alexander to describe the criminal justice system as “the New Jim Crow,” Cruz made sure every Texan knew that his opponent had insulted “law enforcement.”

Throughout the campaign, the moments that made O’Rourke a progressive cause celebre—perhaps the party’s biggest figure nationally since Hillary Clinton—were also the moments Cruz most exploited. It’s tempting to be cynical about that, to suggest that, because he did lose in the end, O’Rourke was playing into conservatives’ hands by speaking his mind about things a more cautious opponent might have toned down. The other way of looking at it is that the candidate who didn’t say those things would have never made the race interesting in the first place. O’Rourke lived and died by his candor and his ideas, but it did him far more good than harm.

Cruz mocked O’Rourke as a favorite of Hollywood and New York City. And although there was no small element of projection in that criticism—Cruz received a greater share of his funding from out of state and relied more heavily on deep-pocketed donors, including coastal billionaires—it hinted at something deeper.

O’Rourke was the first truly national candidate of the Trump era. LeBron James wore a Beto for Texas hat. So, eventually, did Beyoncé (a Texan in exile). On the morning of the election, I overheard a guy at my bodega telling the man making his breakfast, in Spanish, about the historic voting surge in Texas. I do not live in Texas.

His national profile helped him close the money gap that had hampered Democratic efforts in the state for years. O’Rourke built a small-dollar digital fundraising operation that would have been the envy of most presidential campaigns, raising enough money—more than $70 million—to run as many ads as he wanted and set up hundreds of field offices across the state.

His path to victory was always foggy. In the beginning, he couldn’t even explain it himself. “I don’t know that you can objectively quantify it, and I think those who’ve tried to have just stopped looking at the numbers on paper or in previous years’ returns just don’t add up,” he told me, very early in his campaign, when most people still didn’t know who he was.

There was no blueprint for winning in Texas, because no Democrat had done it in the modern era, and there was no infrastructure you could power up and turn on. The state Democratic Party was a fractured unit, comprised of isolated islands—El Paso, San Antonio, Dallas, Houston, Austin, and South Texas—surrounded by impenetrable swaths of Republican dominance. O’Rourke set out like Garibaldi to unify these fiefdoms through a relentless barnstorming campaign. He talked about visiting all 254 counties in the state—a feat he accomplished relatively early on—not just for the completist aspect of it, but because it was essential to the identity he was trying to build. He talked about El Paso in Houston, and Rockport in El Paso. At the second debate, he name-dropped the little pin-prick town of Iraan—he even pronounced it right.

The white whale for Democrats in Texas has been that if you can dramatically expand the electorate, the state might finally be winnable with the right candidate in the right circumstances. In the end, it wasn’t enough. But O’Rourke got them closer than they’ve come in years.