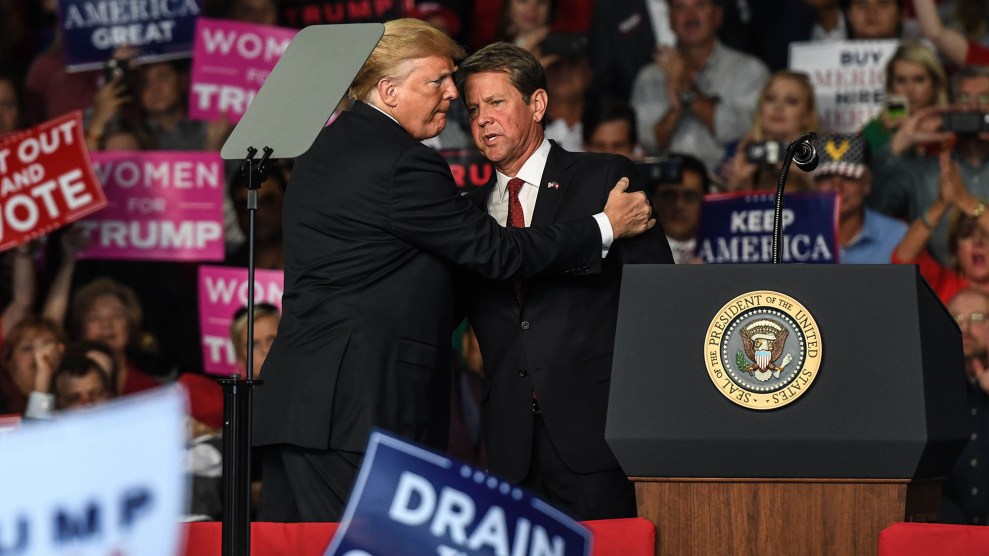 When Brian Kemp, Georgia’s Republican candidate for governor and current secretary of state, announced Sunday that his office was investigating the state Democratic Party for cyber-crimes, it felt like a case of déjà vu. It was the second time that Kemp had made a far-fetched allegation of a cyberattack by Democrats against the state’s election system. The extraordinary move also fit a pattern for the state’s chief election officer, who has previously launched investigations into people and groups seeking to register voters, none of which has resulted in findings of criminal wrongdoing.

Kemp’s announcement, two days before his tight election against Democrat Stacey Abrams, immediately raised suspicions that he was pulling a political stunt. The governor’s race has been dominated in recent weeks by allegations of voter suppression against Kemp, drawing national attention to a race in which Kemp’s voter registration and absentee ballot protocols disproportionately hurt voters of color. The race has also raised serious concerns about Kemp’s dual role as both a candidate for governor and the official in charge of administration of the election. Rather than cast doubt on Democrats, Kemp’s announcement deepened concern about Kemp’s conduct. Election law expert Rick Hasen called it “perhaps the most outrageous example of election administration partisanship in the modern era” and “banana republic stuff.”

By the standards of any election official, the announcement was out of the ordinary—except for Brian Kemp. In December 2016, Kemp alleged that the Department of Homeland Security under President Barack Obama had engaged in multiple cyberattacks on Georgia’s election system. The allegation came as the Obama administration was contemplating expanding its aid to states to shore up their election security in the wake of Russian hacking attempts. Georgia has perhaps the most vulnerable election system in the country. It’s entirely electronic, with no paper ballots to verify results, and it’s centralized so that one point of entry would give a hacker access to the entire state’s system. In addition, the state has 16-year-old voting machines running on outdated software. A DHS inspector general’s report showed there was never an attack by DHS.

Kemp’s latest allegation is in many ways more bizarre. It comes not after the election but days before, at a time when election officials are generally doing everything in their power to increase confidence in the election system—not announce attempted cyberattacks that could cause voters to lose confidence in the system. In August 2016, Yahoo News reported attempted cyberattacks on Arizona’s election system on the eve of the state’s primary. In an interview with Mother Jones earlier this year, Arizona’s Republican secretary of state, Michele Reagan, expressed her frustration that the report had made voters question the security of the state’s elections apparatus just before a major election.

Election officials of both parties agree that the key to a robust voting system is for voters to trust it. Kemp chose the opposite tack. “You suddenly open an investigation without giving any sort of details about what happened?” Edgardo Cortes, the former elections chief in Virginia, told the Atlanta Journal-Constitution this weekend. “In Virginia, we would never have done something like that because I think it would have created a lot of concern among voters.”

In a follow-up announcement, Kemp’s office released a small amount of information about the grounds for the investigation. His office was in possession of an email from a volunteer for the state Democratic Party to the party’s election protection director. The email contained information about how to hack into the state’s system. In response to the allegation, the Democratic Party of Georgia released the email in question, making clear that it was actually a forwarded email from a someone outside the party. Moreover, there’s nothing to suggest that the email was anything more than an attempt to alert party officials to vulnerabilities in Georgia’s system.

Sunday’s announcement fits into a broader pattern for Kemp: He routinely launches hasty investigations, but either never presses charges or fails to make the charges stick. In 2010, Kemp’s office announced an investigation into African American residents of Quitman, Georgia, who had helped turn out other black voters to elect a majority-black school board. Along with the Georgia Bureau of Investigation, Kemp’s office ultimately prosecuted a dozen citizens for voter fraud. One woman was charged with 33 felony counts, including unlawful possession of official ballots and interfering with an elector, which carried a sentence of 100 years in prison. After years of failed prosecutions, the investigation ended without a single guilty verdict.

Days before the 2012 election, Kemp’s office came under scrutiny when a group registering naturalized citizens to vote raised concerns that those voters were not being added to the rolls. Shortly afterward, Kemp launched an investigation into the group, which was dedicated to increasing the civil engagement of Asian Americans in Georgia. Two and a half years later, he quietly closed the investigation with no findings of wrongdoing. To this day, Kemp continues to be accused of failing to add eligible voters to the rolls. On Friday, a federal judge ordered him to make sure new citizens are able to vote on Tuesday, after thousands of them had had their registrations blocked.

In 2014, on the eve of the midterms, Kemp launched in investigation into a voter registration group run by Abrams, his current opponent, who at the time was the state House minority leader. Once again, the investigation led to no charges. But like Sunday’s announcement, it raised the specter of Democratic-backed voter fraud on the eve of the election.