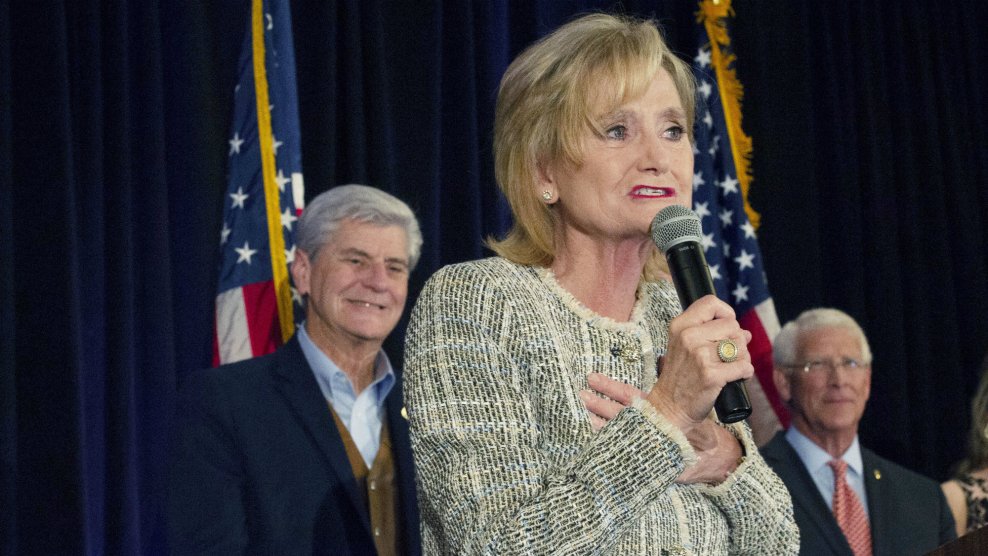 The Republican candidate in the Mississippi Senate race attended an all-white “segregation academy” in the 1970s. On Friday, the Jackson Free Press reported that Cindy Hyde-Smith, who recently came under fire for making a joke about lynching and another one about voter suppression, attended Lawrence County Academy, a high school that was intended to keep white students away from black students.

The US Supreme Court ordered all schools to desegregate in 1954 and again in 1955, but Mississippi was slow to follow the ruling. In 1969, the nation’s highest court ordered the state to integrate its schools and, in response, the following year all-white academies like the one Hyde-Smith attended appeared. These schools were created by white parents who didn’t want their children attending school with black kids, Former Mississippi Democratic Party Chairman Rickey Cole explained to the Jackson Free Press:

“When the public schools in Mississippi were ordered desegregated, many thousands of white families cobbled together what they could laughingly call a school to send their children to for no other reason except they didn’t want them to be around n-words or to be treated or behave as equal to black people,” Cole said.

Hyde-Smith often touts her education at Copiah-Lincoln Community College and the University of Southern Mississippi, but, according to the Jackson Free Press, her high school education is often left out of her official statements and public biographies. Lawrence County Academy closed in the late 1980s, but Hyde-Smith sent her daughter, who graduated in 2017, to Brookhaven Academy, an all-white school that opened up in 1970. In the 2015-2016 academic year, Brookhaven had no diversity, with 386 white children, five Asian children, and just one black one.

In a 1975 yearbook photo provided to the newspaper, Hyde-Smith can be seen in a cheerleading uniform with a mascot dressed as a Confederate colonel. That wasn’t her only brush with embracing the Confederacy.

Cindy Hyde-Smith once proposed legislation that would have renamed a stretch of highway Jefferson Davis Memorial Highway. He had no known ties to her district.

It's one of many instances in which she embraced a pride in the Confederacy, per WaPo. https://t.co/rkQx2tcYZd

As a state senator in 2001, Hyde-Smith proposed legislation that would rename a highway after Jefferson Davis, the only president of the Confederacy. Davis has no known ties to her district. During a recent debate, Democratic candidate Mike Espy asserted that Hyde-Smith had played into a damaging “stereotype” of Southerners.