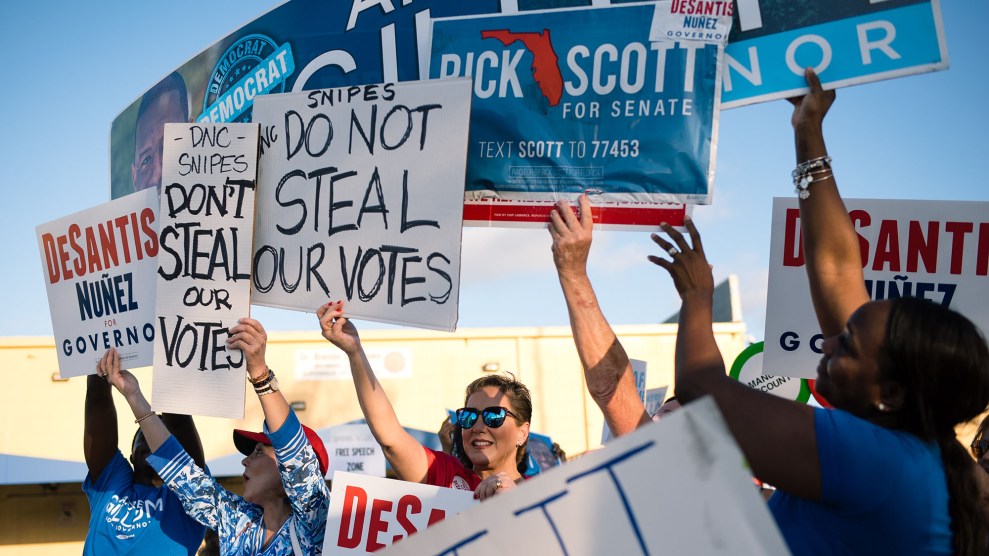 Protesters gather outside the Supervisor of Elections office in Broward County, Florida, as the final votes are tallied on Friday. Emilee Mcgovern/SOPA Images via ZUMA

The tight race for the US Senate in Florida will ultimately be decided on two fronts: the results of a statewide recount and a federal lawsuit over tossed ballots. As lawyers from both sides descend on Florida to fight over each and every ballot, the epicenter of the battle is Broward County. It’s here that Democrat Bill Nelson, the incumbent, is hoping to make up his deficit, but it’s also here that poor ballot design may have cost Nelson the crucial votes he needs to win. As a machine recount begins here Sunday morning, it won’t be long before Nelson learns if there’s hope left for his campaign.

Just north of the Miami area, Broward County is the state’s second most populous county. It’s diverse and heavily Democratic, making it a critical place for Democrats running for statewide office. If there are enough votes outstanding in Florida to put Nelson over the top in his race against Rick Scott, the outgoing Republican governor, they will likely be found in Broward County. This is where the Nelson campaign says machines may have failed to count thousands of votes that will significantly narrow Scott’s lead. It’s also ground zero for Republican allegations of fraud.

As of Saturday afternoon, when Florida counties submitted their first preliminary results to the secretary of state, Scott led Nelson by 12,562 votes out of more than 8 million cast. In the governor’s race, also headed to a recount, Republican Ron DeSantis led Democrat Andrew Gillum by 33,684 votes. The race for agriculture commissioner, in which the Democrat leads by a slim margin, will also have a recount.

Florida’s 67 counties are now in the process of conducting a machine recount in all three races, a process of feeding the ballots through the tabulating machines once more. If the margin in any race tightens to a quarter of a percent, it will trigger a manual recount, in which officials will review ballots where voting machines did not detect a vote and can make calls about voter intent. A manual recount in the Nelson race is expected to start later this week. The Nelson campaign’s goal is to overtake Scott’s vote count at that stage.

As lawyers from both sides descend on Florida to fight over each and every ballot, the epicenter of the battle is Broward County.

The greatest mystery in the Senate race is why approximately 24,000 people in Broward County cast votes for governor and in other downballot races but skipped the Senate race. There are about 24,000 of these “undervotes,” and there are multiple theories about what caused them. The Nelson campaign is hoping that many of these voters actually did mark the Senate field on their ballots, but that the tabulating machines missed it due to a calibration issue.

Marc Elias, an election attorney working for Nelson, told reporters on a call Saturday evening that he believed a recalibrated machine and then a manual recount would find thousands of Senate votes in Broward that had not registered in the first time around. “We expect that when we get to a hand recount, we’re going to see a significant jump in the total number of votes counted versus the machines,” he said. “Based on just the demographics and the partisan breakdown of various counties, I think you’re going to see a significant increase in the Nelson vote share,” he continued. He said there was a smaller undervote in the Senate race in other counties as well.

But it’s possible that these undervotes really are that: votes that were never cast. Due to the design of the Broward County’s ballot, the Senate race was listed in the bottom left corner of the ballot, underneath the voting instructions. A prominent theory about the missing 24,000 votes is that many of these voters simply didn’t see the Senate race and instead started to fill out the ballot at the top of the center column, which began with the governor’s race. If this is what happened, there will be very few missing votes for Nelson to recover in Broward.

Elias, Nelson’s lawyer, discounted this hypothesis as “irresponsible speculation” in the media, though attorneys and local officials in Broward County monitoring the process have expressed concern that ballot design is the likeliest culprit. “There’s no evidence that it’s the result of ballot design,” Elias said.

Beyond the undervote issue, the Nelson campaign is asking a federal court in Tallahassee to add thousands of rejected ballots back into the count. The issue stems from Florida’s signature-match law, which requires that a voter’s signature on an absentee or provisional ballot envelope match whatever signature for that voter that the county elections supervisor has on file. Each county’s canvassing board must review every signature, compare it to the one on file, and toss any ballot where it deems that the signature is not a match. The idea is to root out fraud, but the result is that thousands of eligible voters are disenfranchised because their signatures aren’t exactly the same. Courts have ruled against similar laws in other states, and Nelson’s campaign is asking the court to find the law unconstitutional and count the rejected vote-by-mail and provisional ballots.

The signature-match law hits people of both parties and all demographics—DeSantis himself once had a ballot rejected for this reason—but research shows that it disproportionately disenfranchises first-time voters and people of color. Voters using absentee ballots have until the day before the election to resolve a mismatched signature, but not all of them get that chance, either because they never receive notice of an error or because they don’t learn about it until it’s too late. Incoming overseas and military ballots are still being processed, and local officials continue to discard ballots over a perceived signature issue. On Sunday, Daniel Smith, a political science professor at the University of Florida with access to Florida election results data, estimated that more than 10,000 ballots have already been discarded for a signature match issue.

“There is literally no scientific basis upon which lay people can compare two signatures and decide whether or not they match or don’t match,” Elias said, predicting that a victory in the federal case in Tallahassee would result in thousands of extra votes for Nelson.

As the margins for Scott and DeSantis have narrowed since election night, many Republicans have alleged that fraud on the part of Democratic activists and lawyers is eating away at their victories, rather than the slow process of counting all the ballots. Broward County’s longtime supervisor of elections, Brenda Snipes, has a history of administrative blunders that make her an easy target for Republicans to smear as a crook trying to steal votes. In 2016, for example, her office destroyed 6,000 ballots after a court ordered her to preserve them. The Scott campaign and President Donald Trump have embraced a narrative that Snipes is a player in a broader Democratic attempt to steal the election.

Florida’s Department of State has found no evidence of criminal activity and Florida law enforcement said it has no tips to pursue, but that hasn’t stopped conspiracy theories from spreading. All day Saturday, protesters for both sides rallied outside Snipes’ office in the suburb of Lauderhill as the three-member county canvassing board deliberated over the last ballots that needed to be scrutinized for voter intent. On the Republican side, the protesters repeatedly claimed that fraud was afoot. Many protest signs focused on Snipes. “Brenda No Swiping #StoptheSteal” read one. “Brenda is owned by Hillary!!!” read another.

Just before 5 p.m. on Saturday, GOP Rep. Matt Gaetz, a Trump ally from the Florida Panhandle, arrived in the parking lot to address the Republican protesters. Standing in front of a truck filled with boxes labeled “Brenda Snipes’ Pallets of Ballots” as a prop, he riled up the crowd by suggesting that Snipes was adding fake ballots to the total throughout the week and that Democrats were fighting to allow the votes of noncitizens to count. “Over 400,000 pages of ballots seem to have just magically materialized since the election,” he shouted into a microphone.

Rep. Matt Gaetz is giving a press conference/rally speech outside Broward County supervisor of elections’ office to allege voter fraud. His supporters, who have been outside protesting, are cheering. pic.twitter.com/ClIswTrdAd

Inside the Broward County canvassing board meeting Saturday, the two sides clashed over the signature-match issue. The county included 205 contested provisional ballots in its first unofficial vote tally. Among them were 22 that had been flagged as having mismatching signatures, but they had accidentally been mixed in with the others, so it was unclear which were flagged. Scott’s campaign wants to toss all 205, Nelson’s wants to count them all. An attorney for Nelson invited some of the 22 voters whose ballots had been voided to the canvassing board’s meeting on Saturday to prove that their ballots had been rejected erroneously, but the board didn’t give them an opportunity to testify.

Even more temperate Republicans are raising the specter of fraud. On Twitter, Sen. Marco Rubio (R-Fla.) called the 22 provisional ballots “illegal.” “We know about these 22 because they got caught breaking law in reviewing 202 ballots. How can anyone trust more illegal votes aren’t in their final count?” he wrote. Mother Jones spoke with one of these voters; her senator claims she broke the law, but she’s an eligible voter who cast a ballot the way she was instructed to, and it got rejected by a canvassing board, most likely due to a signature mismatch.

If Nelson beats the odds and overtakes Scott in the next week—whether from a recount that finds previously undetected votes in Broward County or from a court ruling in his favor—many Republican voters will never accept the election as legitimate. But if Scott wins, Democrats in Florida will be forced to accept that a poorly designed ballot in Broward County and a constitutionally dubious signature requirement likely sent a Republican to Washington instead of a Democrat.